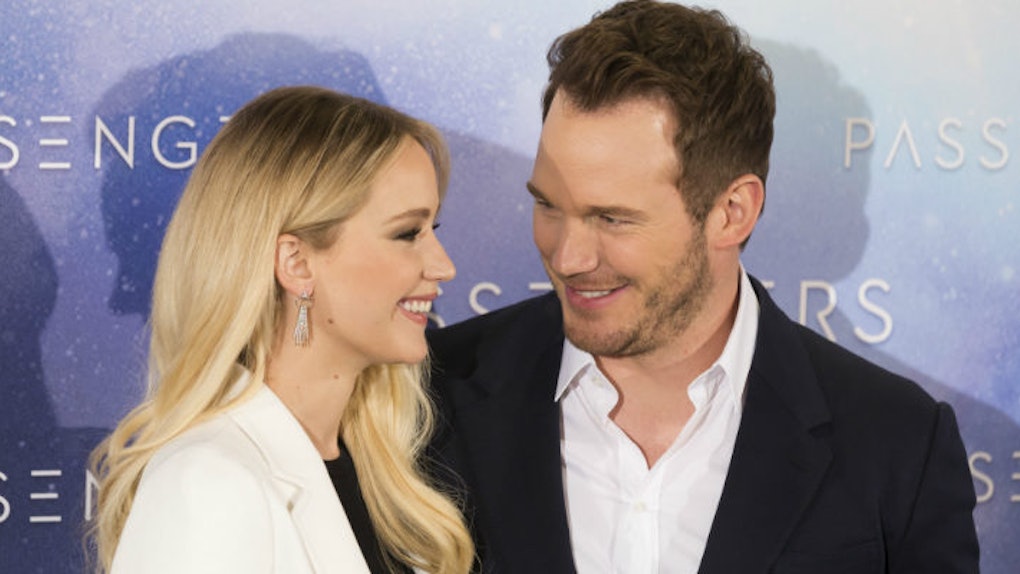 While Chris Pratt showed some serious, awkward hesitance going into the details of his sex scene with Jennifer Lawrence in the upcoming movie "Passengers," he does not seem to have any issue with hilariously trolling her on Instagram.

And no, I don't mean he's posting memes of J Law's many, many red carpet falls, comparing her to Lucille 2 from "Arrested Development" who suffers from an eternal "case of the dizzies."

The "Jurassic World" actor took to the social media site to post this selfie with Jennifer... that basically doesn't show Jennifer at all.

Savagely cropping friends out of photos isn't just for your dating app profile pictures. You can do it to your friends on Instagram, too. It's just the way I like any picture: 84.2 percent me, 15.8 percent everyone else.

Isn't it absolutely clear these two are besties? I don't know about you, but my best friend always ignores me when I ask to take a picture with her.

Of course, my bestie happens to be J. Law, and she doesn't really know who I am... YET.

Oh, and let's not forget this doozie of a diss:

Basically, Chris Pratt is using the Conor McGregor approach to how he poses for Instagram pictures, and I absolutely love the crop job he's done.

Chris recently sat down with GQ and made probably the most flattering compliment about Lawrence you could ever bestow upon on any actor or actress.

She is truly one of the greatest actresses I've ever had the pleasure to work with. She acts like Adele sings. You just sit back and you think, damn, some people... She's a terrible singer! But she's a wonderful actress. She could just do it. She could just turn it on and it strikes emotion in you, like some people can just open their mouths and sing.

I'm glad Chris deals with his friends the same way I do:

If I give a friend a compliment ("you look nice today"), I most certainly cut them down immediately with an extremely harsh insult ("I don't think I can ever hang out with you ever again -- you smell like cottage cheese").

You must keep their ego balanced, I say.