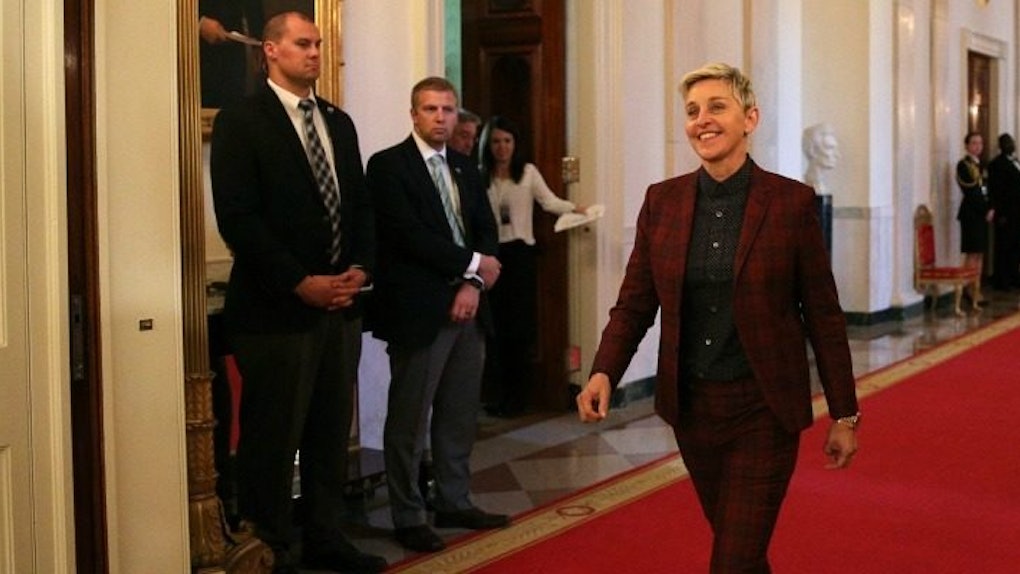 You heard the one about the drunk college girl who was arrested after trying to use a slice of pizza as identification to get into a bar, right?

Well, no, comedian and talk show host Ellen DeGeneres wasn't hammered, but she was almost denied entry into the White House to see President Barack Obama because she actually forgot her ID.

According to Mashable, Ellen DeGeneres ventured to the White House to receive the honor of the Presidential Medal of Freedom. However, DeGeneres forgot to bring her ID to the nation's capitol and was therefore initially denied entry to Obama's crib.

The 58-year-old tweeted the following caption to accompany the picture of her looking sad on a park bench:

They haven't let me in to the White House yet because I forgot my ID. #NotJoking #PresidentialMedalOfFreedom

Damn, White House staff, this is how you do Ellen DeGeneres? The woman is a national treasure, but she can't get into the VIP area? SMH!

A White House press release was extremely complimentary of DeGeneres, but it mentioned nothing about having ID.

In her work and in her life, she has been a passionate advocate for equality and fairness.

Ellen is reportedly one of just 21 people to be awarded the Presidential Medal of Freedom, the "highest civilian honor," this year.

In true Ellen fashion, though, the talk show host wasn't to be deterred. She eventually made it into the White House...

...and then proceeded to have everyone take part in a very epic #MannequinChallenge.

I'm sorry, but it doesn't get any more authentic and raw than Ellen DeGeneres. I still remember watching her do stand up at the Beacon Theatre in New York City, and let me tell you, Ellen's still got it.

All I can say is congratulations on receiving the Presidential Medal of Freedom, Ellen! Hopefully, this proves your tireless work in the community and entertainment industry is more than worth it.

Citations: Ellen DeGeneres forgot her ID and can't get into the White House (Mashable)