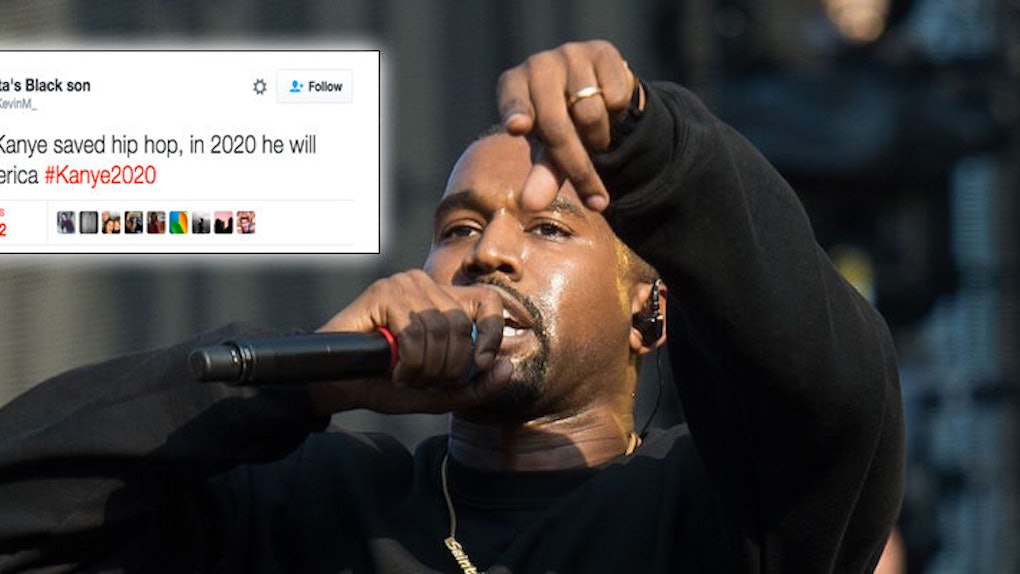 #Kanye2020 Is Trending On Twitter After Donald Trump Won

Like so many of my fellow Americans, as well as folks around the world with even a shred of decency, I'm still trying to convince myself this isn't one long, horrible nightmare.

In the wee hours of Wednesday morning, Donald Trump took the 270 electoral college votes necessary to win the White House, thus becoming the 45th president of the United States.

Donald Trump is our elected leader of the free world.

In the immediate aftermath of Trump being elected president, Twitter exploded in anger, hate and confusion, and one of the hashtags that quickly started trending was #kanye2020.

Yes, folks -- the ones on Twitter at least -- are urging rapper Kanye West to "save them."

In 2015, at the MTV Video Music Awards, Kanye proclaimed he would run for president, and he repeated that claim on BBC Radio 1, saying,

When I talk about the idea of being president, I'm not saying I have any political views. I don't have views on politics, I just have a view on humanity, on people, on the truth. If there is anything that I can do with my time and my day, to somehow make a difference while I'm alive I'm going to try to do it.

Now, you might think it's inconceivable for the 39-year-old to become the next president of the United States, but ask yourself if at any point before early Wednesday morning you thought a Trump presidency could be an actual thing.

On Twitter, someone wrote, "The only hope now is #kanye2020," and there are plenty of users who feel the same way.

So, as you can see, the choice is clear.

After we put up with the next four years of who knows what, we all have to go out and vote for Kanye West to be the 46th president of the United States.

Legit, I'm about to go knocking on doors to get volunteers for the #kanye2020 movement.

Citations: Kanye West the Next President? Fans Call For Rapper to Step Up in 2020 As Donald Trump is Elected Leader of America (Us Weekly)