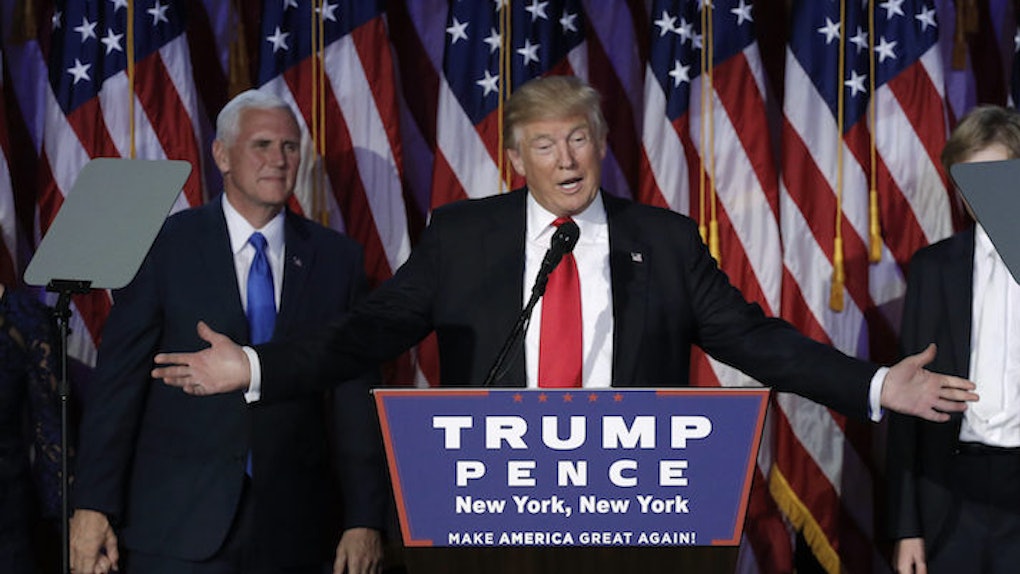 On Tuesday night, Donald Trump pulled a stunning upset and defeated Hillary Clinton in the US presidential election.

After Clinton called him to concede, Trump held a news conference around 3 am in New York City to celebrate his victory.

During his victory speech, Trump spoke of the need to unify the country,

The forgotten men and women of our country will be forgotten no longer. Now it's time for America to bind the wounds of division. It is time for us to come together as one united people. It's time.

I want to tell the world that, while we will always put America's interests first, we will deal fairly with everyone.

He ended his speech by promising he will "not let [us] down."

You can watch the full victory speech below:

So, the man who started the birther conspiracy about Barack Obama -- claiming he was born in Kenya and was not an American citizen -- will officially be his successor.

The real estate mogul ran one of the most controversial presidential campaigns in US history, but it seems the unpopularity of Hillary Clinton ultimately propelled him to victory.

Clinton's association with the political establishment, as well as the fact she's a woman, undoubtedly played a role in her defeat.

Many Americans seem to view Trump as a change to the status quo, and a challenge to what is viewed as rampant corruption in America's government.

But we also can't ignore the strong elements of racism, xenophobia and sexism that led Trump to victory.

While Trump supporters are understandably thrilled by the outcome, a lot of people are clearly very upset about the result of this election.

It was a very close race, and it's safe to say it will be very difficult for Trump to unify the country.

People are extremely fearful of the future.

Trump focused heavily on immigration throughout his campaign, announcing his candidacy by referring to undocumented Mexican immigrants as “drug dealers,” “rapists,” “killers” and “murderers.”

The real estate mogul has also made building a wall along the US-Mexico border a centerpiece of his campaign.

Recently, Trump was endorsed by the KKK's official newspaper.

Trump's victory is reminiscent of the relatively recent Brexit referendum in the UK, which was heavily influenced by nationalism, xenophobia and anti-globalization sentiments.

The real estate mogul was actually quite a proponent of Brexit, in spite of its repercussions.

Brexit immediately had massive consequences on the UK's economy and global markets.

Trump's victory is having similar consequences.

Before it was even totally clear he was going to win, global markets (including the dollar) plummeted

Trump has never held elected office or served in the military.

He's also made some questionable comments regarding foreign policy, especially in relation to nuclear weapons.

It will certainly be interesting, to say the least, to see how he meets the challenges of being the leader of the free world.

His biggest obstacle will arguably be finding a way to unite the country again, given he was literally the most unpopular presidential candidate in modern American history.