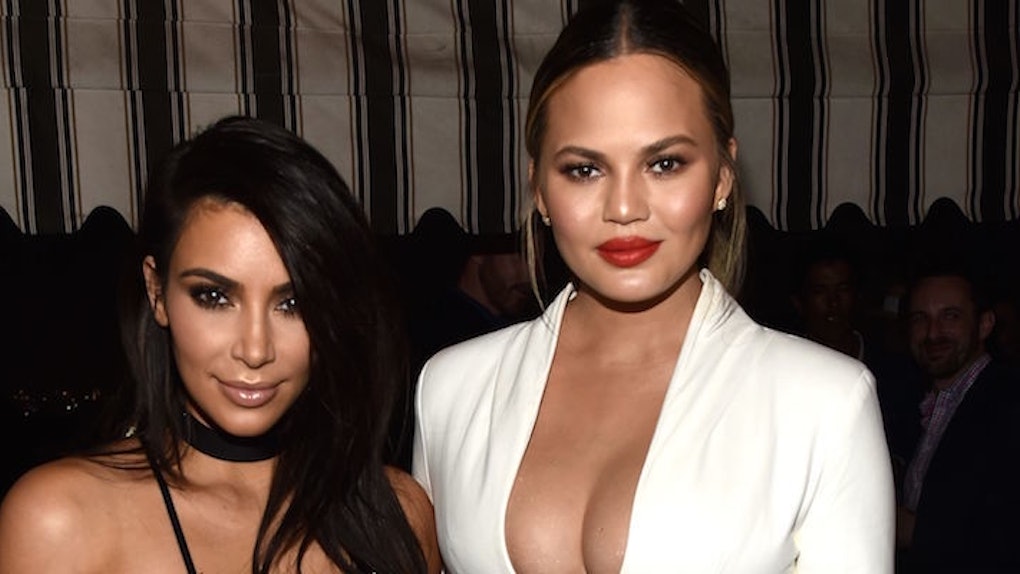 Sorry, Kardashian fans with willing wombs, you made admirable cases for why Kim should choose you as her surrogate, but Chrissy Teigen has officially thrown her hat into the ring and her hat is a $365 Eugenia Kim fedora. So, good luck.

I would be her surrogate in a second… I really enjoyed the pregnancy process — I loved it. Yes. In a heartbeat.

Considering Chrissy and Kim are already pals who cover themselves in dairy together for the occasional Fergie music vid, the 30-year-old's willingness to help birth Kimmy's third child is unsurprising.

I did IVF… science is miraculous these days, anything is possible… I hope whatever she does is gonna work out for the best, and it's gonna be beautiful either way.

Kim and Chrissy would likely have to broach the topic with their husbands, Kanye West and John Legend, before following through with the arrangement (That's how marriage works, right? No secret babies, right?). Considering John began his mainstream career as Kanye's protege, though, both artists will likely be on board.

Baby craziness in general is something Chrissy attributes to the LA lifestyle. She admitted,

For some reason, when I'm with my L.A. friends, they're so worried about having a baby on time — 'Am I too old for a baby?' In New York, people take their time, they get their career right, they do everything, they take it a little bit slower.

SO true, Christine. As a New Yorker myself, I can confirm the closest my friends and I have come to parenthood at this point is adopting a puppy, naming it “Butt” and returning it to the pet store after it wouldn't stop pooping all over the walls.*

*Apologies to the friends/abysmal dog parents I've just outed. I owe you one.**

**By "owe you one" I mean one drink or one ice cream, not one dog. You get zero more dogs.

Citations: Chrissy Teigen Offers to Be Kim Kardashian West's Surrogate: I Would Do It 'in a Heartbeat' (People)