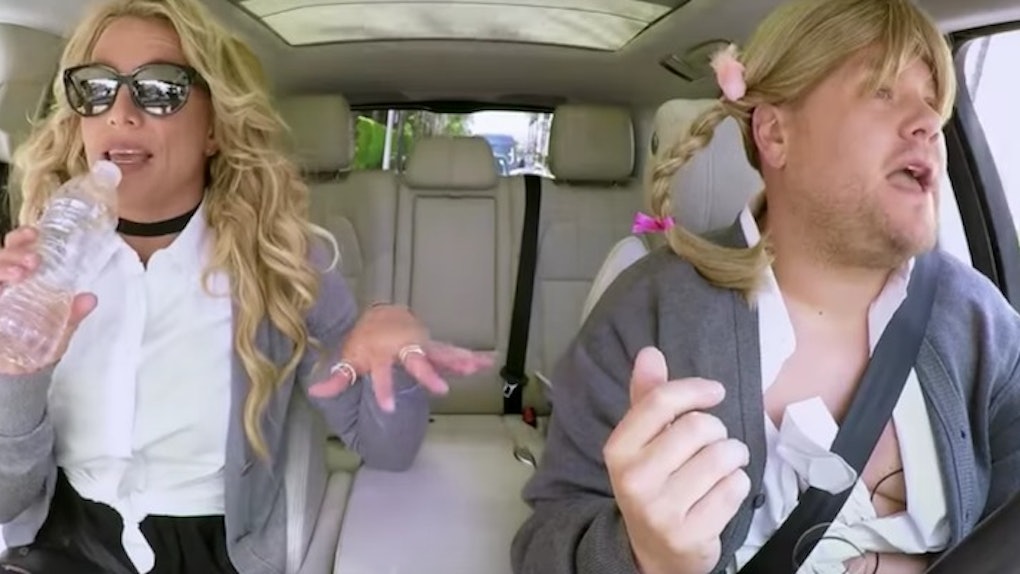 Britney Spears and James Corden took a ride this week for "The Late Late Show" host's famous "Carpool Karaoke" segment. The experience seemed to be a little awkward for both of them, but we'll take it.

When the teaser came out, it kind of looked like the Queen of Pop was lip syncing her own songs, but we had hope maybe she'd do some actual singing in the full segment that's almost 10-minutes long.

Some Britney fans may be disappointed -- she didn't exactly belt out her own hits, but she shared a lot of juicy details about her personal life and did some awkward dancing next to Corden.

Of course, Corden had zero reservations about his lovely voice, jamming out like a true fan to "Womanizer."

Between talking kids, marriage and a new kind of bondage that involves tickling, the two cruised to Britney's classics like "Oops!... I Did It Again" and "Baby One More Time," as well as "Make Me," a new song from her album Glory, which just came out today, August 26.

Britney definitely let Corden take the lead on these songs, adding a "what" and "uh" between singing very softly. Maybe she didn't want to steal the spotlight? I mean, it is his show.

I will say, Britney seriously needs to work on her car-dancing game.

A lot of elbows happening in the passenger seat over there.

OK, this was pretty fantastic. She definitely sang "Baby One More Time" at the end. Maybe the producers hid an actual microphone in that water bottle?

I guess we'll see what happens when Britney performs at the VMAs this Sunday, August 28. She'll probably feel a little more comfortable singing and dancing on an actual stage -- even though this is her first time performing at the VMAs since 2007.

Maybe she got the bad elbow dancing and awkward banter out of her system. Either way, we can't wait.