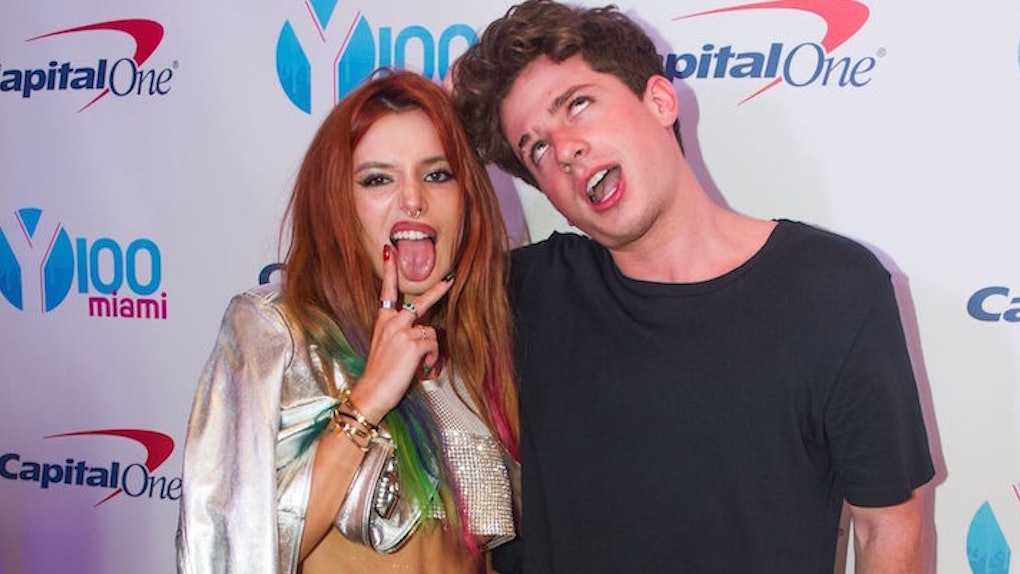 Over the weekend the former Disney star was involved in a public love triangle. You see, she and Tyler Posey, who many of you know as "that guy from 'Teen Wolf,' right? 'Teen Wolf?' Is it 'Teen Wolf?'" have been linked for a while.

The two ended things a few weeks back and Bella has clearly moved on.

Pictures surfaced online of her over the weekend with Charlie Puth doing cute beach stuff.

On top of that, she and Charlie did the most Hollywoodish couple thing imaginable: they got involved in a nip slip scandal.

Weirdly, though, she also posted a shot of a few pictures of her and Tyler to Twitter on Wednesday.

The internet was clearly not aware that she and Tyler had broken up, so they spent the weekend angrily tweeting at her for cheating with Charlie.

The second these tweets started coming in, Charlie abandoned ship, apologizing to an unnamed person...

...before going on the offensive.

YEEEESH! Let it be known that if you are ever looking to assemble a squad to carry out low-end bank robberies, do NOT let Charlie on your team. Charlie folds like composition notebook paper under the slightest amount of pressure.

Bella has officially spoken to clear up any confusion about the timeline of her being involved with Charlie, by the way.

So there you have it. Everyone lay the EFF off Bella, OK?

I like to imagine both Tyler and Charlie reading this and doing a spit take when they read this tweet.

Tyler, because this is the way he's potentially finding out the two are broken up, and Charlie because, wellll...

Your loss, Charlie. Maybe next time don't act like Jack Bauer is holding a gun to your head while screaming "WHERE ARE THE LAUNCH CODES?!??" whenever someone sends mean tweets to you.

Citations: Bella Thorne and Charlie Puth Are Not Dating She Says (Teen Vogue)