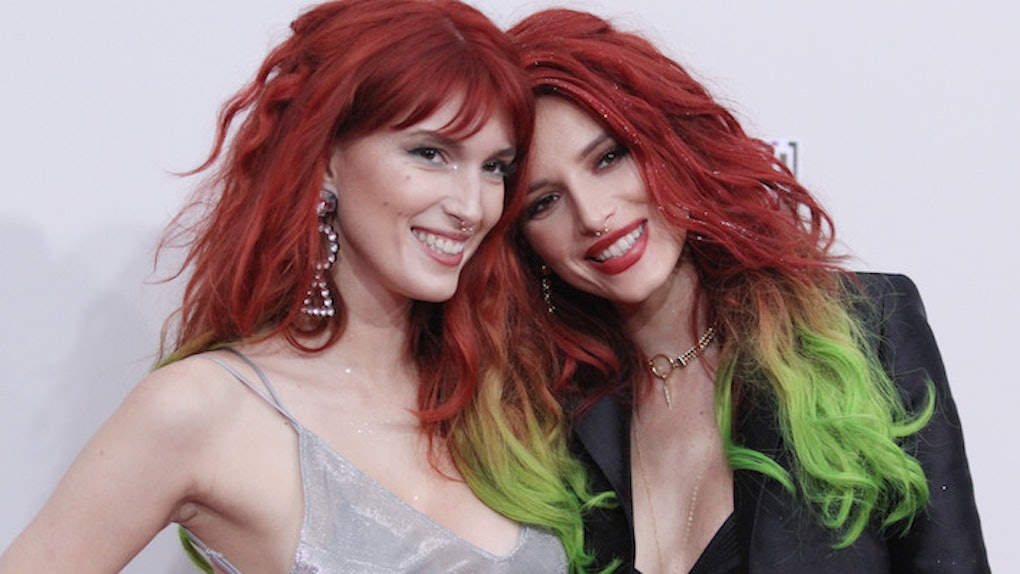 Bella Thorne And Sister Take Off Their Clothes On Snapchat

If you thought Chrissy Teigen's revealing outfit at the American Music Awards was enough to make you stop and stare, you'll be completely mesmerized by Bella Throne's recent, post-AMAs Snapchat.

The 19-year-old actress took to Snapchat the morning after the AMAs to post a sexy photo with her 23-year-old sister Dani Thorne.

Despite the fact that Bella Thorne was crowned one of the worst dressed celebrities at the awards show this year, the starlet was sure to redeem herself in the new Snapchat photos.

Behold Bella Thorne and her sister Dani posing for sexy Snapchats. It's OK to stare (just this one time).

While this particular snap might make you all hot and bothered, Bella's outfit at the AMAs this year would have the exact opposite effect after she sported eye-catching (for the wrong reasons) red and green hair to the event.

Would it be an awards show if they didn't each channel their inner Miley Cyrus?!

Hey, you don't have to love Bella's AMAs outfit, but you have to admire her willingness to constantly try new things.

Speaking of new things, the 19-year-old former Disney actress came out to her fans as bisexual after her friendly breakup with ex-boyfriend Gregg Sulkin back in August.

Thorne had posted a photo of her kissing another woman on Snapchat. When fans questioned her sexual orientation, Bella simply confirmed that she now identifies as bisexual.

However, instead of announcing a potential connection between herself and the mystery woman in the Snapchat photo (or Demi Lovato), Bella Thorne began dating actor Tyler Posey from MTV's "Teen Wolf."

In other words, I'm sure trying out a new colorful hairdo is the least of Bella's concerns. She's got more important things going on these days! Take that, "worst dressed" list.

Citations: That's one way to avoid being worst dressed! Bella Thorne and sister Dani strip down to their underwear after disastrous AMA outfits (Daily Mail)