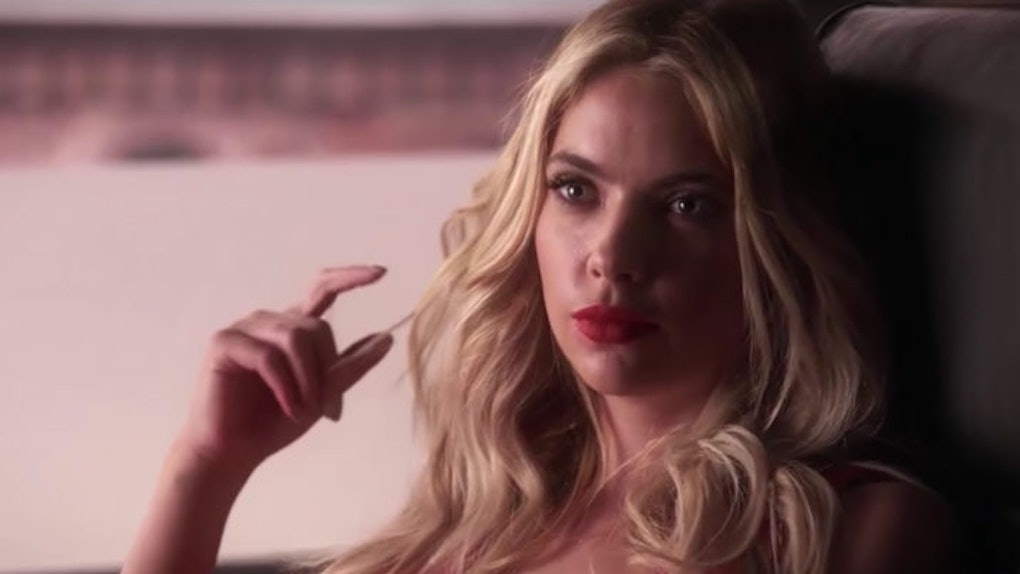 Ashley Benson: You'll Be 'Shocked At Who A Is' On 'PLL'

It was Ashley Benson's idea for the "Pretty Little Liars" cast to get those matching tattoos, for the record.

I talked to her about the tattoos and the end of "PLL," along with her new move to New York City, on Giving Tuesday.

As Elite Daily's politics writer and resident "Pretty Little Liars" expert, I got to meet her in the city.

It's strange to meet a celeb in real life -- you just want to be like, "OMG YOU SOUND JUST LIKE HANNA" -- but Benson was warm and friendly as we chatted on a couch like the best friends we definitely will be now that we live in the same city.

Benson partnered with PayPal, which adds 1 percent to donations, to celebrate Giving Tuesday. In case you don't know, Giving Tuesday is a day dedicated to supporting charities and helpful organizations.

It's like Black Friday or Cyber Monday, but -- you know -- nice.

She has two dogs herself, but hasn't brought them to New York, where she just moved, quite yet -- "because it's super, super cold."

I feel like it's gonna burn their little paws with the snow and the salt on the ground!

(It's at this point in our conversation that I said "muffins" instead of "mittens"... when I really meant "booties." So, great job, Svokos. Killin' it. Regardless, Benson laughed and said her dogs can't walk in the booties.)

It's a big time of change for Benson. Aside from the move, she and the cast and crew just wrapped up on seven years of "Pretty Little Liars."

The final (half) season is airing next spring, and the finale is two hours long. Benson thinks "PLL" fans will be pleased with it. She added,

I was really pleased with how the show ended. Marlene [King, showrunner] worked really hard writing this episode. It's two hours, so it's going to be kind of like a little movie. I think they'll be shocked at who A is; I think they'll be very happy with how all the storylines wrap up. I can't tell you much more or else I'm gonna ruin it.

It's definitely strange to be done with the series. Benson joked that she's going to have to remind herself next spring that the show really is over and that she doesn't have to go back to work on it.

To commemorate the end of the series, a handful of the main Liars got tattoos on their fingers with their characters' initial(s).

Benson told me she brought the idea up with the girls six months ago, just mentioning that she wanted to get one. She said,

None of them were really down with the idea at first. Then as we were closing, I was like, 'I'm getting a tattoo, so whoever wants to join.'

At which point everyone decided to be onboard. But then there was the whole question of what to get.

Mirroring Hanna's fashion sense, Benson knew what to do. She revealed,

I thought, let's just get the first letter of our names -- or people got first and last, whatever. They wanted to put it on their ankle and all these places, and I love finger tattoos, and thought it'd be cool if we did the shush thing. So it kind of worked out really well, and everyone got it there.

Although now, Benson said, she might have to redo it since it may have faded a little.

With "Pretty Little Liars" done, Benson has time to do film, which she's wanted to do for a long time.

In a lightning round of questions, Benson said she'd still be working in film even if she weren't an actress. She said she would be,

A chef and probably producing, directing, and then a world traveler.

Her favorite alcoholic drink is a tequila grapefruit or a whiskey, she picked *NSYNC over the Backstreet Boys, and she does "NOT" do karaoke.

She said she would wear Hanna's designs -- "if they were black."

Benson said Tyler Blackburn, who plays love interest Caleb, and Shay Mitchell, who plays Emily, make her laugh the most of her "PLL" cast mates.

Benson said if she could be BFFs with one character on the show, it'd be Hanna, which is such an amazingly perfect Hanna answer.

And fam, I tried to trick her into telling us who Uber A is during the speed questions... I TRIED, but she's too good and caught herself before giving anything away.

Guess I'll have to wait 'til the spring to find out... or get her to confess it over tequila grapefruits right before she gets up to sing Britney Spears at a New York City karaoke bar.