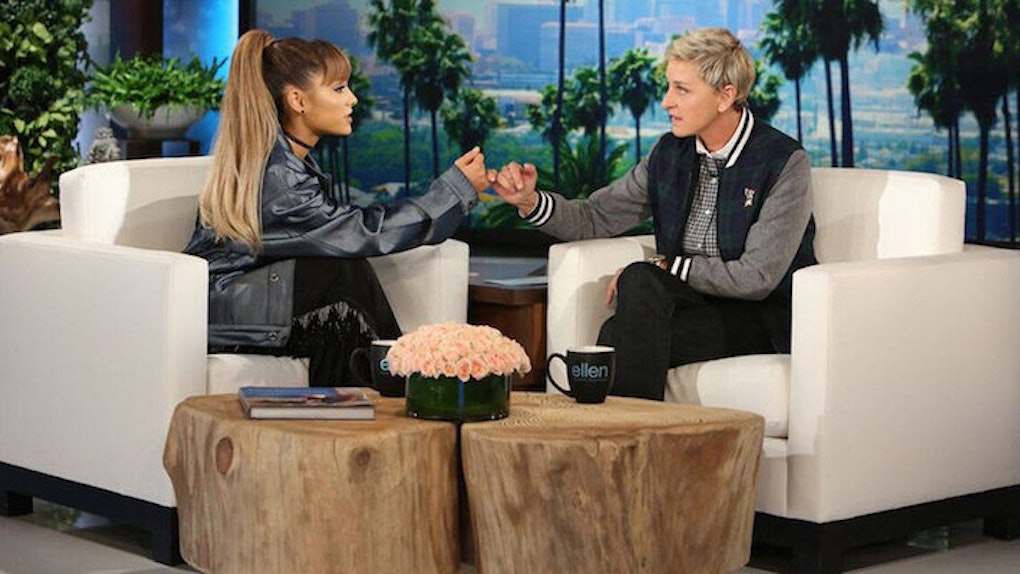 Thanks to the ancient art of peer pressure and Ellen's aggressive use of it, Ariana Grande has confirmed she is dating Mac Miller.

On Wednesday, the 23-year-old pop star stopped by the "The Ellen Degeneres Show," and was unexpectedly met with the Spanish Inquisition about 24-year-old rapper Mac Miller.

(Of course, nobody expects the Spanish Inquisition.)

Ellen and Ariana were just discussing the meaning of the term "fuck bicycle," when suddenly Ellen said, "Let's talk about your love life, can we?"

Ariana was clearly caught off guard and visibly flustered. Fidgeting with her jacket, she said,

Apparently "I don't know" is a "yes" to Ellen Degeneres because she pressed forward and brought up pictures of Ariana and Mac on her show together three years ago.

I asked you something about him, and you said 'I'm his homie,' and now he's living in your homie.

To which Ariana replied, "There's that." The singer makes a feeble attempt to vocalize her discomfort, protesting she's never "had the relationship talk on a show before" to no avail.

Ignoring any and all vibes, Ellen finally went in for the kill and asked Ariana to confirm whether she and Mac Miller are dating.

Ariana, who undoubtedly realized this was the only way to end the torture, answered,

Of course, it's hardly a secret the two have been romantically involved recently.

Last week Ariana posted an Instagram photo of Mac literally on top of her, with her legs wrapped around his neck, and captioned it "baabyyy."

And last month, the two were spotted kissing in a restaurant in California. So I think it's safe to assume they're more than friends.

Still, Ariana was obviously not expecting Ellen's line of questioning on the matter. I have a feeling that part was included in the pre-interview briefing.