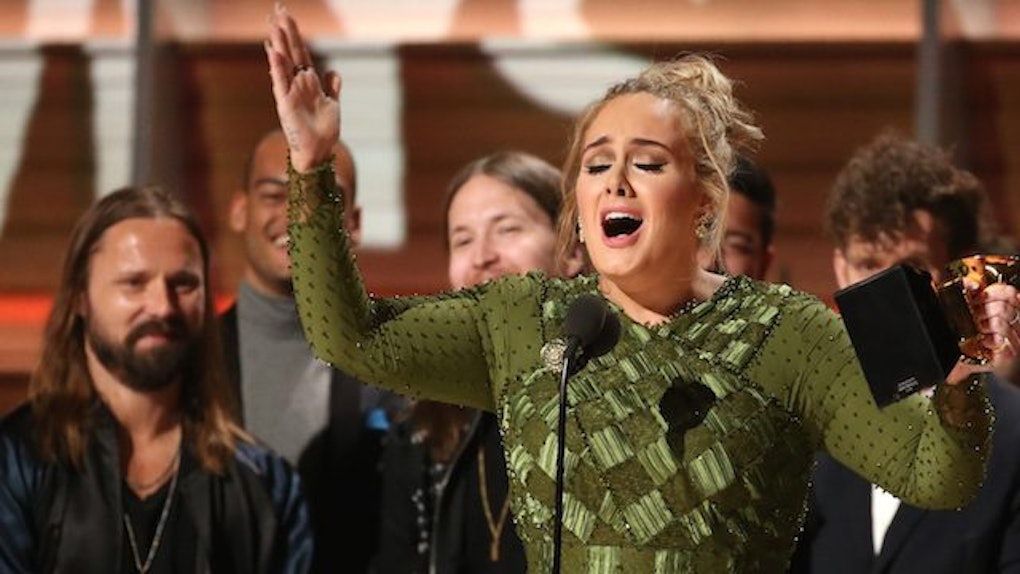 Adele Wears Giant Ring On That Finger At The Grammys

While Adele was occupied perfecting her tribute to George Michael, even stopping the show and starting the song again to give him a proper tribute, a lot of people were occupied eyeing that suspiciously large ring on her finger.

The singer, who opened the show with the Song of the Year, "Hello," successfully threw some kindling on the fire that is her engagement/secret-marriage rumors.

Adele wasn't wearing the ring while she walked the red carpet, making even more people think she is low-key entering or has already entered wedlock.

Let's study this a bit deeper.

Hmm... she is wearing a ring on every finger except the MARRIAGE FINGER. Odd.

And, if my eyes don't deceive me, I would say there's a slight tan line where a ring belongs.

Ring, ring? Hello, it's me. A GIANT ROCK ON YOUR FINGER.

In January, Adele and her longtime boyfriend, Simon Konecki, were seen in Beverly Hills with the singer wearing a ring on her left ring finger, which may or may not look like the one pictured above.

Adele, why are you keeping it a fucking secret?!

After winning five Grammy Awards, including Song of the Year, Record of the Year AND Album of the Year, Adele finally let it be known, she is, in fact, probably married, because she thanked her husband in her final acceptance speech of the night.

Grammys, I appreciate it. The Academy, I love you. My manager, my husband and my son, you're the only reason I do it. Thank you so much.

Though, it seemed like she was more interested in thanking Beyoncé for Lemonade, which was also up for Album of the Year.

Totally understandable -- if I ever win an award, I suspect I would forget my parents, significant other and sibling, but I would never, ever forget Beyoncé.

Congratulations to Adele on her wins and her marriage! But wait, were you not going to tell us if you didn't win five Grammys tonight?