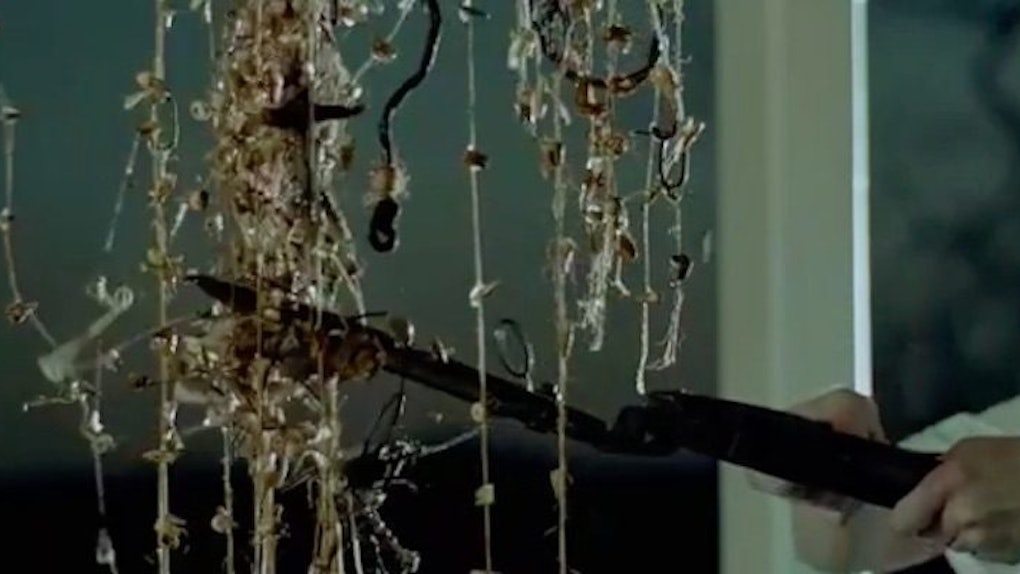 So, 'American Horror Story' Premiered And These Are The Questions We Have

I really thought after last night's "American Horror Story," premiere, I would finally have some answers about this mysterious season.

Instead, all I have are EVEN MORE QUESTIONS.

The show is doing something it's never done before: A show within a show.

The entire episode was treated like a crime documentary series, complete with interviews with "real" people and "dramatic reenactments" like you see on The History Channel.

In this fake documentary series, called "My Roanoke Nightmare," Shelby and Matt (Lily Rabe and Andre Holland) sit down to tell the camera the story of when they moved into a farmhouse in North Carolina to start a new life.

Side note for those who don't know: The Roanoke Colony, or the lost colony, is a true story of a famous English settlement in North Carolina whose entire population went missing in 1590.

Then, through "reenactments" (where Shelby is played by Sarah Paulson and Matt is played by Cuba Gooding Jr.) we start to see freaky things happening in the old house.

Matt calls in his sister (Adina Porter in the interviews and Angela Bassett in the reenactment), an ex-cop, to stay with Shelby while he travels. However, after more and more weird things keep happening, Shelby drives away and slams into a colonial woman, played by Kathy Bates, with her car.

At the very end of the episode, we see Wes Bentley coming out of the shadows.

While no preview for the next episode aired on FX after the premiere, there was one posted on the official AHS Twitter.

Ok, but I still have so many questions.

1. Is the theme actually "My Roanoke Nightmare," or is that just the name of the fake documentary?

While many people have been assuming "My Roanoke Nightmare" is the theme, that wasn't made completely clear in the episode.

Others are saying the theme is actually just "American Horror Stories."

Nothing's been confirmed and everyone's confused.

2. Is the whole season going to be in documentary style or just some of the episodes?

The creators said this season would take place in "two time periods," surely that means more than just these reenactment scenes?

3. Where the heck were the opening credits and theme song?

Is there not going to be one this season? All we got was this brief graphic before ad breaks.

4. Does this mean the lady cutting strings of teeth was the real teaser?

We were told only one teaser we got actually had anything to do with this season. At one point during the premiere, Sarah Paulson discovers a bunch of teeth on the ground.

5. Where were Lady Gaga and Evan Peters?

Lady Gaga confirmed she was coming back to act in this season, but her name wasn't even in the credits. And Evan Peter's name WAS in the credits, but I didn't see him in the episode at all.

(BTW, if you're looking for Jessica Lange too, she's not coming back to AHS, sadly.)

Hopefully next week's episode will clear some things up, but I'm not holding my breath.