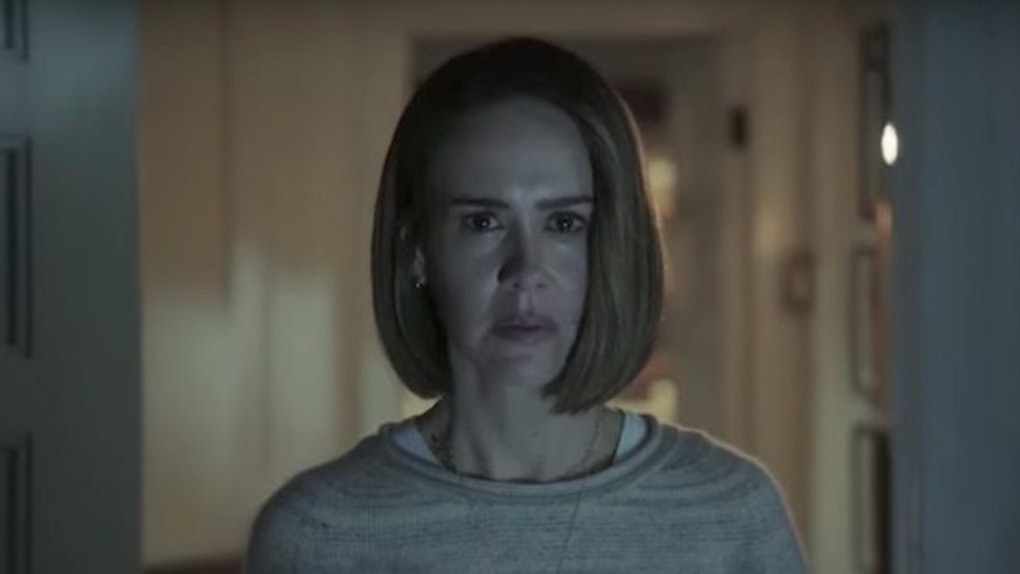 How Many Episodes Are In 'American Horror Story: Cult'? Everything You Need To Know Before The Premiere

Last week we got the first full trailer for American Horror Story: Cult, which opened on Sarah Paulson as Ally Mayfair-Richard screaming in horror as her TV announced Donald Trump as the winner of the 2016 election. Kai Anderson (Evan Peters), who is watching the election somewhere else has a different reaction: a shout of triumph and humping his television. Later we see Ally telling her therapist, “Since election night it has all been getting so much worse."

It doesn't look like Hillary Clinton or Donald Trump will actually be characters in the season, except in the sense that someone wears creepy masks that look that them.

In that same trailer, we get a glimpse of Sarah Paulson's character's marriage to Ivy, played by actress Allison Pill. But apparently, Allison is going to have a romance with Evan Peter's character, the blue-haired, alt-right maniac, Kai. Ryan Murphy called their relationship "a love story for the ages" on his Instagram.

If you were upset about the lack of Evan Peters last season, never fear. This time around the actor is taking on many characters in addition to the cult leader named Kai, including famous cult leaders from recent history like Charles Manson, David Koresh, and Jim Jones.

Lena Dunham is in it.

It's true, the star of Girls, Lena Dunham, is in American Horror Story: Cult. She has a very small role as Valerie Solanas, who tried to murder Andy Warhol after he rejected a play she had written.

Billy Eichner is in it.

You may know him from "Billy on the Street," or Parks and Recreation but Billy Eichnerr is taking on the horror genre as a beekeeper in this season of AHS.

As for what bees have to do with this season, that I still don't know. Bees?