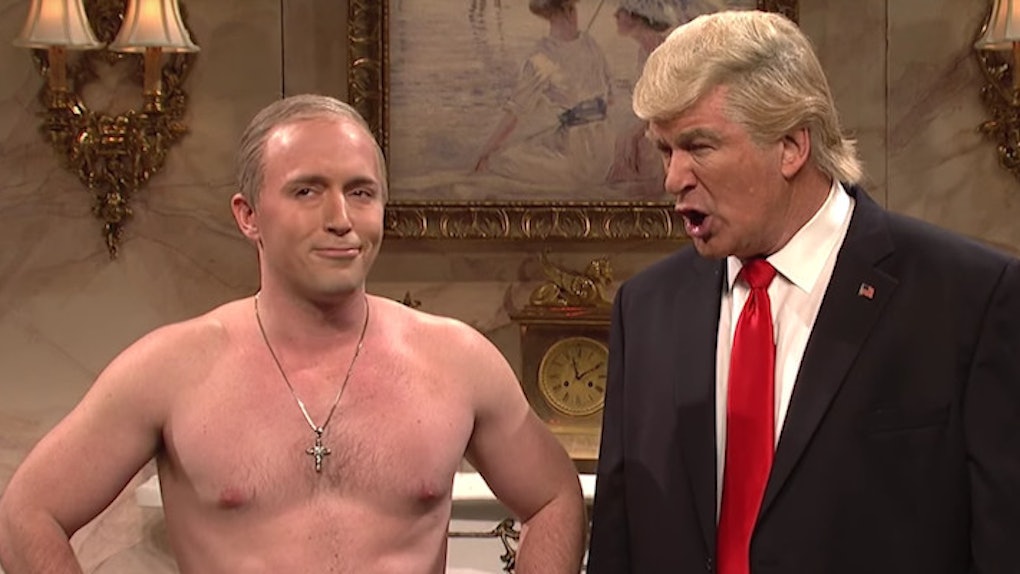 In last night's cold open of "Saturday Night Live," Alec Baldwin donned the wig, the suit, the tie and the spray tan and transformed once more into the hero 2016 doesn't deserve: fake Donald Trump.

Sure, this happens pretty frequently now, but this time... oh. This time is different.

THIS time, The Donald was visited by a very special guest: shirtless Vladimir Putin.

Putin (played by Beck Bennett) shimmied down the chimney with care in hopes that Donald Trump soon would be there, and would also let him plant some Russian spyware in order to keep track of his spray-tanned puppet he just got elected president.

Because, you know, Russia hacked the election and everything.

Never one to back down from a good roast, "SNL" dragged Trump for his general idiocy (remember when he spelled "unprecedented" incorrectly earlier this week?), as well as his horrible cabinet picks (yet again).

But nothing highlights Trump's stupidity quite like his own words and his wild ego, and "SNL" knows that.

So, to drive the point home that Trump is an idiot and Putin is evil AF, John Goodman came in playing Rex Tillerson, the newly appointed secretary of state/Exxon Mobil CEO/Putin's BFF.

In 2013, Tillerson was awarded the Order of Friendship by Putin, which is one of the highest honors Russia gives to foreigners.

So it's probably safe to say Putin is pretty excited about Tillerson's new gig.

Goodman and Bennett really play into the whole BFF thing by showing us their ~super secret handshake~ and calling each other nicknames.

Then, the men get down to business while the lil' baby Trump tries to participate in a conversation he's clearly not equipped for.

In a pretty chilling convo about oil, military takeovers and lifted sanctions, Bennett and Goodman make plans for the future of their countries. (They are not good plans. These are scary plans.)

But Baldwin's Trump, unable to keep up with the big (evil, don't forget evil) boys, makes plans for the future of Vanity Fair, which recently said Trump Grill is one of the worst restaurants in America.

Because nothing bothers the president-elect more than people making fun of him!

Baldwin says, "And then we destroy Vanity Fair, right? They're a terrible publication, really just terrible." "Sure, buddy," Goodman responds.

Baldwin basically makes Trump look like a kid begging to sit at the grown-up table at Christmas dinner because he's "smart" and "grown up" now.

But Bennett and Goodman were like, "OK, Trumpy. Yeah! You're sooooo smart. We actually want you to run this country! You're definitely not just some idiot we're using as a disguise to cover up all of the fucked up shit we'll be doing over the next four years!"

Honestly, the biggest takeaway from this skit is how spot on "SNL" is with its criticism of Trump's insanely fragile ego.

He will praise anyone who calls him smart, even people who have threatened our democracy, and condemn anyone who tries to make him look bad, no matter what the facts are.

Even when the CIA, the FBI and just about every single American intelligence agency is in agreement that Russia hacked the election in favor of Trump, Trump denies the merit of these agencies because, well, at least the Russians were hacking in favor of him.