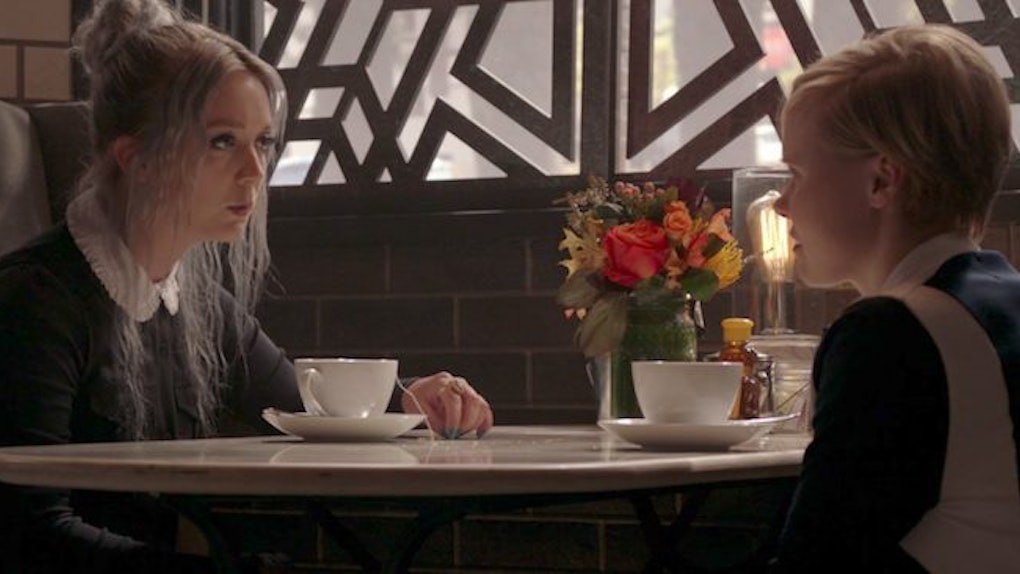 'AHS: Cult' Theory About Ivy & Winter May Prove Why Ally's Being Targetting

Alright, so we are well into the seventh season of American Horror Story and sh*t is hitting the proverbial fan, guys. As is always the case with AHS, there is so much happening with each new episode; between all the unexpected twists, gruesome murders, and jumps in chronology, the thrills and confusion are at an all-time high. Of course, with every new episode, as we find out more about the characters and how they are connected, fans come up with new theories about how the rest of the season will play out. That being said, a new AHS: Cult theory about Ivy and Winter may explain how Ally came to be targeted by the cult.

By now, you've probably read at least some of the many theories online about how Ivy might be connected to the cult of demon clowns that's been terrorizing Ally. It's been suggested that Ivy is one of the murderous clowns, that she may have used Kai as a sperm donor to conceive Oz, and that she may be Kai and Winter's sister. One way or the other, it's becoming increasingly clear that Ivy is, indeed, a member of the pervert clown club; now, it's just a matter of figuring out how she became involved. A new theory shows how Winter and Ivy were connected prior to Winter being hired as Oz's nanny, and it might just explain why the cult is tormenting Ally.

You'll remember Season 7 opened on election night, 11/8, and much of what has taken place since has been in the aftermath of Trump's winning. Episode four of AHS: Cult — titled "11/9" — however, furthers the idea that Ivy is connected to Kai's cult when it jumps back in time to before the election and reveals something huge: Winter and Ivy knew each other before Winter became the nanny from hell.

During a rally scene towards the end of the episode, Ivy engages in a short back-and-forth with Chaz Bono's character, Gary, a Trump supporter who sexually assaults Ivy before running away. This is where it gets interesting. In an effort to defend Ivy after Gary attacks her, Winter shows up and chases after him; when she is unable to catch him in time, she goes back to check on Ivy and the two end up going to eat together at The Butchery on Main. Their mutual disdain for Gary, and misogyny in general, leads them to kidnap and tie up Chaz's character so that he is unable to vote on election night.

If you're anything like me, you were probably too busy paying attention to the man sawing his arm off to put two and two together and figure out all of this is clearly taking place before Winter comes to work for Ivy. In other words, it's possible that Ivy met Winter at the rally and convinced her to join the cult, which would explain why the cult is terrorizing Ally: They either want her to join, as well, or they want her out of the picture entirely.

The fact that these two knew each other prior to the insane events of the first few episodes opens up a whole new world of twists, turns, and questions. Was the kidnapping an act of initiation for Ivy? Did Ivy and Winter plan the whole bathtub thing with Ally? Are Ivy and Winter hooking up? Did Ivy send Pedro to "help" Ally on purpose, knowing she would do something sinister? Did Ivy fire their first nanny so she could hire Winter? Does Kai know about any of this or is Winter starting her own cult?