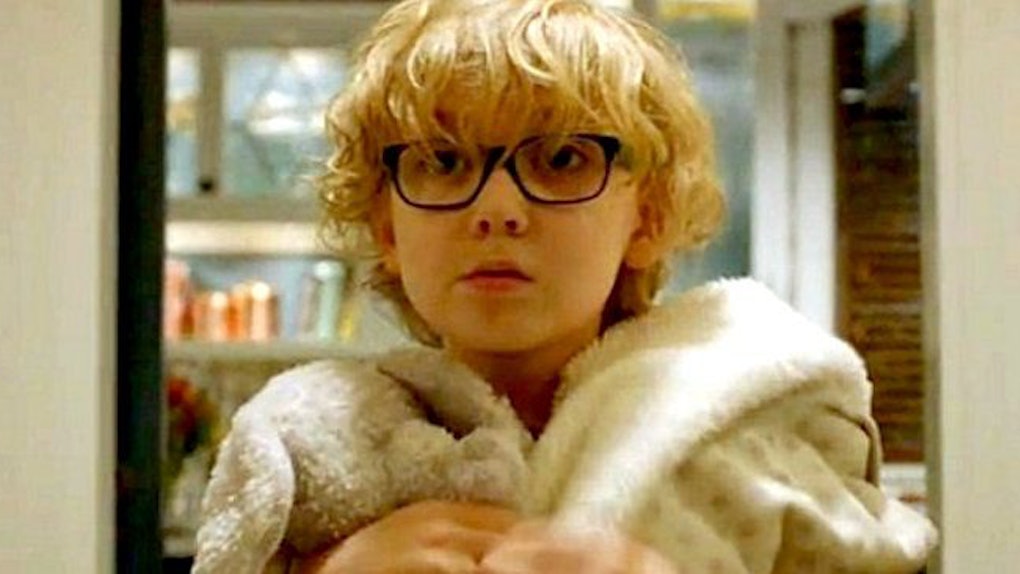 'AHS: Cult' Theory About Oz's Dad Could Explain Why The Cult Is Targeting Ally

After another terrifying episode of American Horror Story: Cult, we have more questions than ever about what's going on with this mysterious, murdery clown cult. One of the major things you're probably wondering is why this creepy organization is going through all this trouble to terrorize a seemingly random family. I mean, we see Evan Peters' Kai Anderson going out of his way to terrify and try to get into Ally and Ivy's (Sarah Paulson and Alison Pill) house, and the clowns have been following Ally for a while now. On top of that, the clowns killed their friends and neighbors the Changs, and although we don't know for sure what the new neighbors Harrison and Meadow are up to, it seems like they might be in cahoots with Kai and the rest of the cult. Plus, there's Kai's sister Winter gaining the family's trust from the inside as the nanny. So why expend sooo much time and effort to surround and terrify Ally and Ivy? Well, a new AHS: Cult theory about Oz's dad is offering up a pretty convincing explanation.

A bunch of perceptive viewers have taken to Reddit to put forth the claim that the cult is actually interested in Ally and Ivy's son Oz. A big part of the theory has to do with the meaning behind Oz's full name, Ozymandias. Viewers have pointed out that Ozymandias is an ancient Greek name tied to powerful rulers, most notably the long-ruling Egyptian pharaoh Ramses II. It's also famously attributed to a poem by Percy Bysse Shelley of the same name, which refers to Ozymandias as a "king of kings." With such a royal name, fans think Oz might actually be the future leader of the cult, and that would explain why the cult is getting so close to him.

This would also explain Winter's role as Oz's nanny, which Kai urged her to take in the premiere episode. Winter has been using her time with Oz to desensitize him to brutal murders by forcing him to watch videos of people being stabbed to death. There's also some speculation that Ivy could even be in cahoots with the cult as well, since she also has a nature themed name like Winter and Meadow. We also caught a quick glimpse of Ivy and Winter covered in blood next to one another in the series promo trailer, so it seems like something is up between those two.

But the real cherry on top of the theory is who fans think Oz's father is. Check out the full fan theory about Oz below, and then we can get into what his paternity might have to do with the cult.

Okay, so basically, fans are putting together that Kai is probably Oz's biological father, and now he wants his son to come back into the fold and take over the cult. This would fit in with the fan theory about Oz's importance, and it also explains why Winter asked Oz about his father when she first met him (he responded that he didn't have a father, but Winter assured him everyone has a dad). Not to mention, Oz's shaggy blonde hair and round face do make him look a lot like Evan Peters...

But in the middle of all this possible father-son drama, where does this leave Ally? My best guess is, that if this theory proves to be true, Ivy was a member of Kai's cult that he ordered to enter a relationship with Ally to watch over his son. Ally probably is Oz's biological mother, and the main source of conflict in the season will revolve around Ally finding out she has a child with Kai. After all, before the season even began, Ryan Murphy did tease that Ally and Kai would have a love story for the ages...