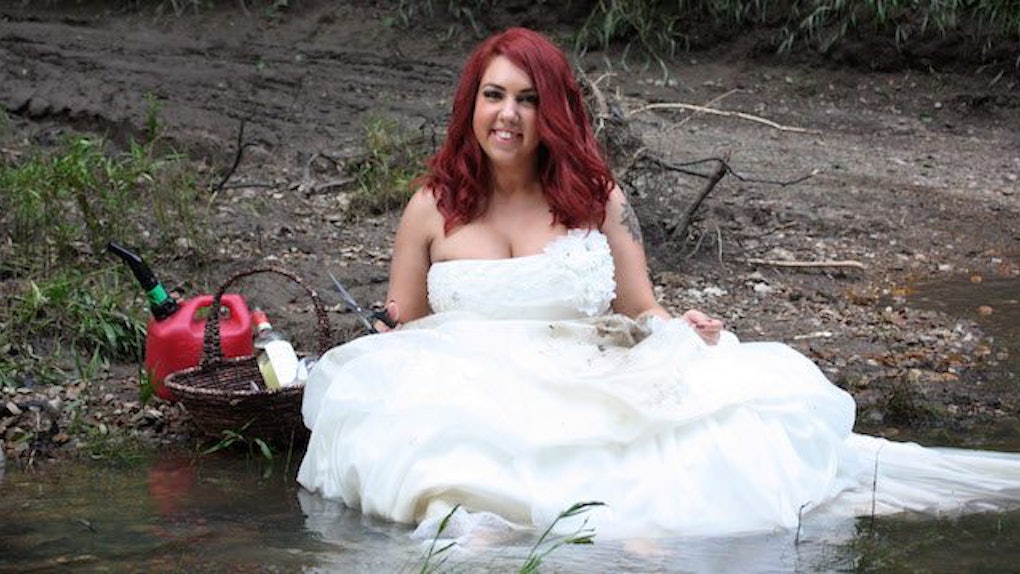 Never underestimate the power of a scorned bride.

Katlynn McKee (AKA my new hero) recently took to a muddy river to set her wedding dress ON FIRE for a photoshoot designed to celebrate her divorce.

And may I just say, the photos are breathtaking.

The 25-year-old told MailOnline she and her ex-husband had been together for 10 years before things went south. They started officially dating when McKee was only 16 years old, and they were married for four years before calling it quits.

McKee explained, "My relationship wasn't a good one, so it was a relief to finally be free."

And her freedom is exactly what the photoshoot exemplified.

Hiring the same photographer who photographed her wedding, McKee used the experience to shed her old marriage and start over.

After doing a little bit of research on Trash the Dress, she hatched the plan to head out into a river, cut up the dress and ultimately set that bitch on fire.

"I watched it burn while I drank the wine", she said.

Additionally, the shoot took a sexier turn than initially expected, as McKee was left in her lingerie after shedding her dress.

Feeling so confident in the set up, she even let her ex in on her plans.

She said, "He was surprised that I was going to do it because I'm not really like that. He joked that he should be in it and I could punch him or something, but I wanted it to be just me."

McKee now plans on hanging the provocative images up in her new home, and she insists her new boyfriend isn't intimated or upset by the photos. She said, "I'm now happily in a new relationship and he really likes the pictures."

The best part of this entire story? The "liberating, exciting and empowering" photoshoot helped McKee regain some lost confidence.

She concluded, "I was really happy with it all and I loved the way it turned out."

What a wonderful happily (unexpected) ever after.

Citations: Woman sets her wedding dress on FIRE and downs a bottle of wine in a bizarre photoshoot to celebrate her divorce (and her new boyfriend thinks the pictures are 'cool') Read more: http://www.dailymail.co.uk/femail/article-4248528/Woman-sets-wedding-dress-FIRE-celebrate-divorce.html#ixzz4ZRTbA2Dn Follow us: @MailOnline on Twitter | DailyMail on Facebook (MailOnline)