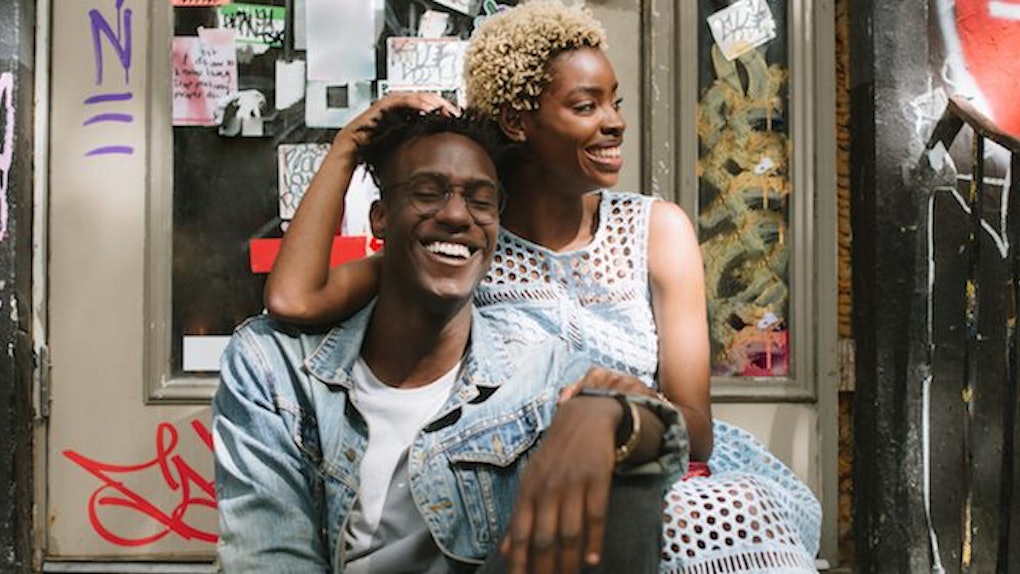 "And the sex was 100" is a phrase that I recently texted someone from my past. (Cringe city.) We were mid-conversation, and hadn't caught up in eons. I had planned on eventually emailing him about the grad program he graduated from, which I am applying to. When his Instagram handle popped up as having "liked" my photo, I was tipsy and certain that 10 p.m. was a brilliant time for essay advice. (Oops.) The one great thing about those five words? Typing them out reminded me while I liked him, it soooo wasn't true love. I had just been lusty AF.

My mind has a terrible time telling the difference between love and lust. If I had to define "lust" on my own, sans Google, I would say it's that rush of physical and intellectual chemistry you have with someone who makes both the drinks part and the bedroom part of a date exhilarating. It's definitely what I imagine crack feels like. "Lust" is more than just great sex, but less than "I will eventually pee with the door open when you are home." (Which, while unromantic, I would say falls into the "love" category.)

Considering that I sent the aforementioned uncouth text just this past weekend, and that I have just admitted to you all that I confuse love and lust quite regularly, I decided to do some research in order to discover what the actual differences between the two L-words are. Here's what I found:

1. Lust Is Driven By Different Hormones Than Attachment

Let's start with science: A team at Rutgers University led by Dr. Helen E. Fisher published an article about romantic love that breaks it down into three categories: lust, attraction, and attachment. "Lust" is driven entirely by testosterone and estrogen in the brain, "attraction" is driven by dopamine, norepinephrine, and serotonin, and "attachment" is created by oxytocin and vasopressin. Whew, that's a mouthful.

You can think of it like this: Lust really is about the sex being 100. Estrogen and testosterone, the hormones that drive lust, are involved with reproduction and evolution, plain and simple. Think: a one-night stand.

While lust and attraction are closely related, you can actually have one without the other. Attraction has to do with "reward behavior." Dopamine is released in our brains when something feels good to us, whether that's sex, drugs, gambling, or donuts.  Think: the giddiness of the first few months of dating someone you really like.

Attachment, which is a prerequisite for true love IMO, is in fact not only present in romantic relationships. Attachment has to do with oxytocin, which is released during childbirth and is sometimes called the "cuddle hormone." Think: your best friend or a family member.

I think we usually lump lust and attraction together, and consider the addition of attachment the piece that solidifies a true, loving relationship. Science says all three of these pieces together make up true, romantic love, so if you've only got the sex happening, you might just be in lust.

This tidbit is less scientific, and more easily digestible. Dating and relationship coach Monica Parikh of the School of Love NYC told Elite Daily: "Infatuation begs for an instant relationship. Love understands that true intimacy is developed over a long time and through many seasons of life." Pretty much a much more nicely-stated version of what I was saying about eventually peeing with the door open.

Lust is immediate, as is attraction. There's a palpable chemistry that leaves you feeling quite frenetic and sometimes even obsessed with seeing your person as often as possible. True love only happens when you've spent a lot of time together and gone through the ups and downs of life that you'll inevitably continue facing together if you keep dating. You know that friend who moved in with her boyfriend after a month? Are they still together and in love? Yeah, didn't think so. Takeaway: Time is money when it comes to love, too.

3. Lust Is Physical; Love Is Emotional

OK, so this seems pretty obvious. According to Dr. Judith Orloff in an article for Psychology Today, if you want to get black-and-white about the difference between lust and love, there are some actual behavioral signs you can look for. She states that the signs of lust are: being focused on a person's looks, being interested in sex but not conversations, not wanting to cuddle the next morning, and being simply lovers and not friends.

Cool, sounds like a hookup. That makes sense, but feelings are tricky, even when you're just boning. Dr. Orloff says that the signs of love include: wanting to spend time together outside of sex, getting lost in conversations together, wanting to listen to each others' feelings and make each other happy, and meeting family and friends.

Uh oh. Now I feel like maybe I've been in love with everyone I've ever dated again. I've pretty much always had a healthy dose of emotional chemistry before doing the deed with someone I'm seeing. But before you, too, confuse yourself about whether you are in a lustful or loving relationship, remember that science told us that lust, attraction, and attachment are all part of true, romantic love.

If you don't lust after your partner's body, but love spending time with them, they probably are (or should be) your best friend and not your SO. (Hello, friend zone.) On the contrary, if you love your partner's body, but also enjoy stimulating conversations with them before the sex over drinks, you don't necessarily need to get married. (I'm speaking from experience here.)

The balance between lust and love is tricky, and I would say that maybe it's not about defining your relationship as "lusty" or "loving" but identifying what you are looking for in your partner and making sure that both of your needs are met in an equitable way. Don't settle for lusty sex sans sleepover if all you want is for your boo to cuddle you until the sun comes up, you feel me?