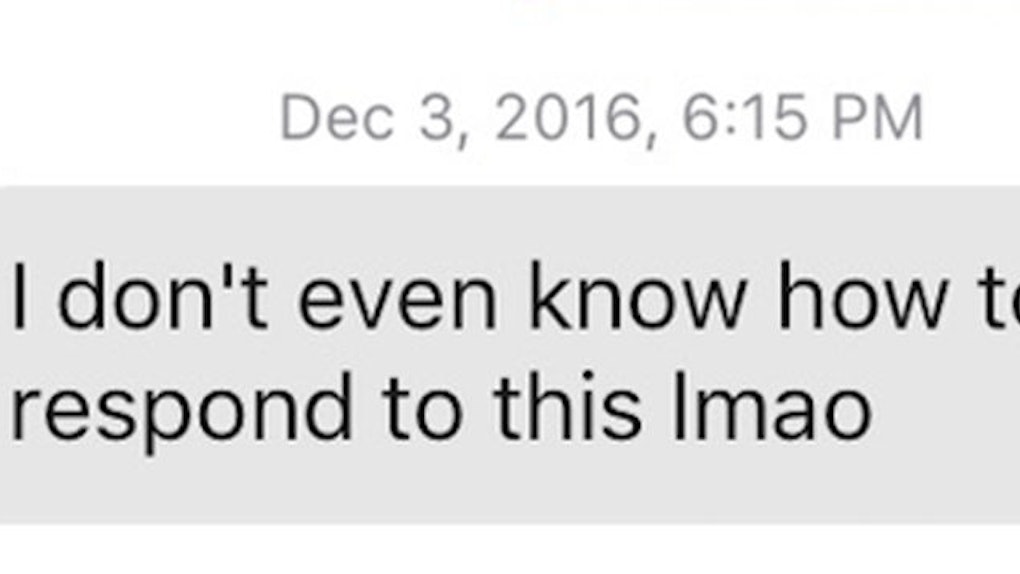 Maybe your pick-up line is stupid. Maybe they just hate your profile picture. SO MANY MAYBES. SO MANY QUESTIONS.

Enter Joe Bagel, a 25-year-old Canadian man who has cracked the system and crafted a way to warrant a response every. single. time.

Joe Bagel (a pen name) is a freelance copy writer who has begun crafting "name poems" — aka acrostics — for each of his matches.

Just Admit My face Is Everything

I mean, I'd respond.

Bagel explains that since he's started employing the strategy, his responses have doubled.

He told DailyMail.com, "I've been lucky. The more responses you get on Tinder, the more matches Tinder gives you. It's how their algorithm works, I guess."

Additionally, these messages have led to about 500 responses and 12 dates IRL. For the most part, Bagel says he can come up with the poems fairly easily, but notes "sometimes you'll encounter a beautiful Xhulia or Jingzhu that will really stretch your poetic imagination."

Woof. Hang in there, Bagel.

He says it takes him about five to 20 minutes per poem, and (maybe lovingly?) ends each one with a signature that includes the woman's first name followed by "name poem."

While he insists 90 to 95 percent of his poems warrant a response, sometimes the mass of messages piling up can be overwhelming and not all responses are positive.

Bagel says, "It's hard because oftentimes girls will be so enamored with the poems that they'll ask you out themselves. So I've had to be more careful about how many poems I send."

SUCKS TO BE JOE BAGEL, I GUESS.

Citations: Who said romance was dead? Single man claims he has found the secret formula to ensuring a 100% success rate on Tinder: creating funny POEMS out of the women's names (Daily Mail), How I get a ~100% response rate on Tinder (Medium.com)