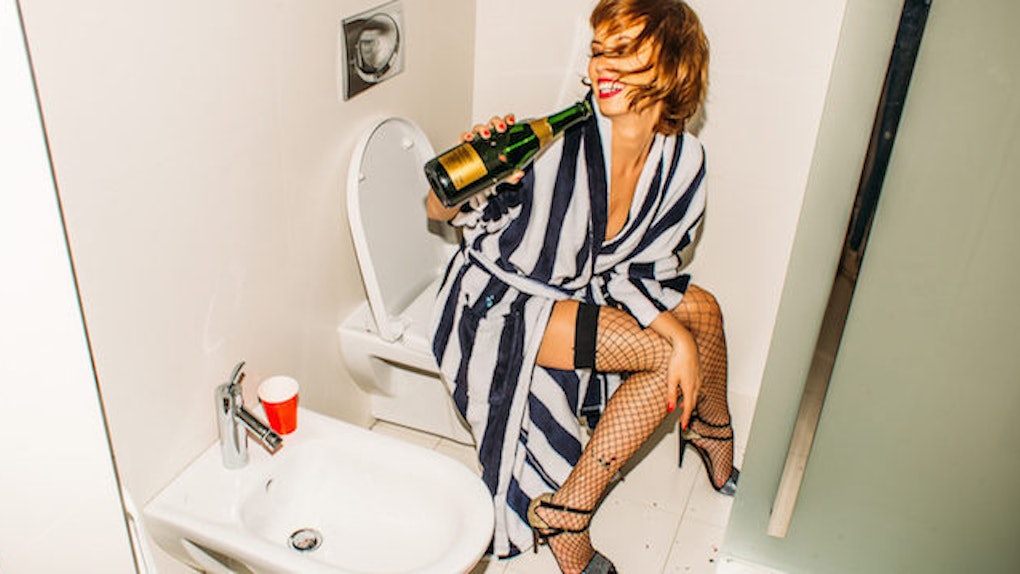 A couple of months ago, I woke up with my heart racing so fast, it felt like it was going to fly out of my chest, never to be seen again.

My head hurt so badly; my soul ached. My eyes felt like someone had poured bleach into them.

I rolled over and saw that my sassy friend, Kyle*, was in bed next to me, filing his nails.

"Uh, what happened last night?" The words felt strange and foreign in my mouth.

Kyle snickered and batted his mega lashes at me. I felt my old friend Anxiety snake its way around my body. It felt creepy, like being snuggled by a lover you don't love anymore.

"I didn't black out or anything," I said, my panic growing. "I just don't remember the end of the night. Or the mid... OK, fine. I blacked out!"

Anxiety feels creepy, like being snuggled by a lover you don't love anymore.

I glared at my beloved Chanel bag recklessly tossed on the dirty floor, a sea of tampons gracelessly spilling out of it. "What happened? What did I do? Who did I offend? Are you mad at me? Does everyone HATE me? WHO DO I NEED TO APOLOGIZE TO?!"

Kyle took an intentional, smug sip of his "cold-pressed juice." His glowing, hangover-free skin filled me with a deep, ugly jealousy I didn't even know I had stewing inside of me.

I froze in fear. What I had done to Meghan? Meghan, the hot, together girl I was currently lusting after? I HAD SEEN Meghan?

Meanwhile, I was the lone 30-year-old lesbian, hungover and destined to die alone.

My brain suddenly swirled with dark, hungover thoughts. I began to think about all of the things that are (relatively) cute in your 20s that become just, well, uh, sad in your 30s.

Look, I'm not advocating that anyone smokes, and we all know smoking is never technically "cute." Blah, blah, blah. I'm bored with this conversation already.

I'll say it even though I'm going to be sent into the witch's fire: When you're a chic, little 20-year-old, desperately trying to look adult and European, the occasional ciggy is forgivable.

It's so transparent that you're young and misguided and trying too hard, it can't help but make (some of) us go, "Aww, I remember those days." You can even be a little Lolita-esque ~sexy~.

However, when you're 30, a cigarette hanging out of your mouth isn't innocent-looking, sweet or sexy. You just look like a grown ass woman who is addicted to nicotine.

I know a 22-year-old, up-and-coming model named Sam*. Sam is deranged. She struts into the bar, eyes bulging, cigarette lit, boldly demanding free drinks from the bartender, bursting into spontaneous tears, spilling her heart out to random dudes in ripped stockings.

Even though Sam is a pain in the ass, she looks pretty cute while acting like a loon. "She's only 22. She's been through a lot," we'll whisper to each other as she grabs a plastic crown off the head of the poor bachelorette who had to take two trains from Long Island to get to New York City for her engagement party.

When you're 22, acting out is kind of chic. I like to call it "deranged chic." When you're in your 30s, acting deranged just looks like actual mental instability and like you need to up the dose of your meds, babe. (And maybe you do! That's OK. I had to myself.)

When you're in your 30s, acting deranged just looks like actual mental instability.

Again, I'm NOT advocating that anyone takes drugs, so chill out, baby!

However, when you're 23 years old, taking too many psychedelics at a music festival, tripping your brains out and having an epic, public freakout and ruining the weekend for all of your friends, it makes for a funny story.

When you're deep in your 30s and still tripping your brains out and ruining the weekend for your friends because you still, after all these years, can't hold your fucking drugs, it is annoying. And you'll find that a lot of invitations "get lost in the mail."

Blowing off work because you're hungover

When you're in your 20s, the occasional blowing off of the ole' day job isn't that pathetic. I mean, come on, you cute, 20-something-kitten. You're still figuring out how much liquor you can hold. Plus, your 20s are the time to get too wasted and screw shit up occasionally.

When you're in your 30s, blowing off work because you're hungover is just lazy. Come on, girl. We've all been down this partying road for a decade now.

Put on your red lipstick, suck it up and go to work. Because grown ups go to work, even when their heads are pounding like an anxious heart and the inside of their mouths feel like the Sahara Desert.

Being wildly insecure in your 20s just goes with the territory. Needing incessant validation is kind of adorable because you're in your 20s, and everyone is LOST in the whacked-out decade of ~the 20s~.

"Does this make me look FAT? Is this color flattering on me? Am I stupid? Am I ugly? DO I HAVE ANY TALENT?" It's cute.

However, being wildly insecure in your 30s doesn't have the same charm. It's time to validate yourself, babe. We're 30-something forces of nature now.

It's time to validate yourself, babe. We're 30-something forces of nature now.

We don't need other people to tell us what color looks good on us. We know. Own it, girl.

When I first moved back to New York, I met this 20-something little minx, Layla*. Layla was a party girl who wrote a gossip column for a niche New York gossip website.

Layla would constantly post memes on to her Instagram detailing to the world how much she didn't give A FUCK about what anyone thought about her.

But really, it was so evident that Layla had zero self-esteem. Her over-the-top, "I don't give a shit about anything!" attitude was so laughably transparent, it was cute.

I mean, being in your 20s is a time of deep insecurity peppered with surface-level confidence. It's comical to everyone.

Your 20s is a time of deep insecurity peppered with surface-level confidence.

Oh, but when you're in your 30s and you're still rocking the faux confidence, it becomes sad. It's like, girl, drop your guard and just be real already! It's time to realize that vulnerability is bold, and faux confidence is boring.

Being banned from bars

When I was in my 20s, I was banned from some shitty bar on Bedford Avenue in Brooklyn. I was very proud of this feat. Every time my friend and I walked passed the bar, I would boast, "I'm banned from that bar."

"Ohhh, why?" my friends would ask, intrigued at what kind of badass thing I had done to actually get BANNED from an establishment.

It was cute because I was a young, little punk who was so clearly insecure and deranged and couldn't hold her liquor that you couldn't even be mad.

"She'll grow out of it," my older sisters used to assure my worried mother.

And thank sweet heavens I did. (I mean, I've slipped up a few times, but shhh.) Because if you're getting banned from civilized establishments for acting like a loon in your 30s, it doesn't look like a badass rebellion. You look like a disrespectful woman with a drinking problem. Gah.

But I feel the need to state ten things that are TOTALLY STILL SEXY in your 20, 30s or any age...

So, my newly 30-something darlings: Life doesn't get terrible in your 30s. You don't have to have anything figured out. The fun and mistakes don't have to end, either.

Maybe it's just time to stop glorifying being a hot mess and start celebrating your fierce togetherness instead.