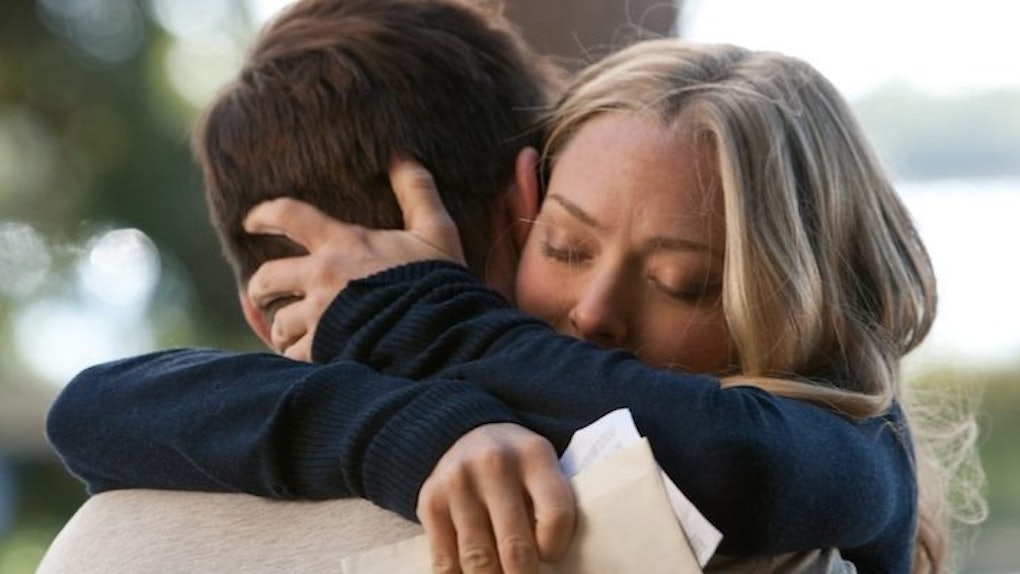 How I Got Back (And Kept) 'The One Who Got Away'

Last May, when my ex and I ended things, I felt completely lost. For me, he wasn't just an ex: He was the one who got away. There wasn't a real reason why we broke up, but there were a million reasons why we should have stayed together.

Yet, regardless of the ties that bound us so tightly, life happened. Stress, distance, poor timing, immaturity, selfishness, jealousy and lack of communication all played their parts in destroying what we had built.

Even though our relationship was over, there wasn't a piece of my heart, mind or body that didn't hold on to, crave and cherish the love we had. I was stuck somewhere in the middle of the five stages of grief, and I never quite made it to “acceptance.”

I think my friends and family became so sick of me exhausting every possible scenario of how “things could have been different.” But timing is everything (and I mean everything).

People who are meant to be in each other's lives will always find their way back to one another. They may take detours in life, but they are never lost.

While I spent the last seven months of my life taking detour after detour, trying to piece my life back together, I realized that I too was never really lost. But every choice I made was a stone along my path, and I paved my way back to him.

I got him back. We got our love back. This time, it's for keeps. Here is how I did it:

1. I stopped pursuing him.

The day we ended things, I lost all composure. I became the kind of ex-girlfriend I never wanted to become.

I spent my days sending pleading texts, calling him crying, apologizing for random behaviors (not to mention anything I could have possibly done wrong) and begging for him to let me pick him up at the airport when he came home for Memorial Day. (Which he did, by the way.)

Although at that point, I figured it was just an act of sympathy. I just couldn't get over the fact that someone who had said he loved me so dearly could just stop. He was someone I saw as my soulmate, but maybe he really wasn't.

His two-word responses sent chills down my spine, and broke me over and over again. They eventually wore me down, and after embarrassing myself for about two weeks, I brought all communication to an abrupt halt.

2. This forced me to take two giant steps back.

The moment I cut off communication with him was the moment I could re-evaluate how we had steered off course. I really can't express how important that was.

At first, it was blurry, distorted and one-sided, as it always is. I blamed him for just about everything.

But after a couple weeks of switching between crippling anger and inconsolable sadness, I realized that it wasn't just him who had driven us off the road. It was me, too. I was his co-pilot in the whole mess.

I realized that I had missed every sign that had indicated something was wrong. We were steering so far off course, we could never find a way back. I was completely oblivious that I was holding a map with all the right directions.

By the time I realized that all I had to do was open it, we were too far gone. All I could think was, "Oh dear God. What have I done?" From that point forward, all I could think about was getting everything back on course.

Once I realized where things had gone wrong on my part, I put all of my efforts and energies into “fixing myself.” I was broken, but it was more than just my heart.

It was my confidence, my life, my routine, my friends, my lack of hobbies: everything. Nothing was right. Then, I boiled the end of our relationship down to one sole thing: me.

I was so unhappy at my job, my lack of a social life and my boring hobbies that I put all my happiness on him. I needed him to provide me with all my happiness because I couldn't find it in my life or self. I can't express to you how toxic and damaging that is.

So, I invested in new hobbies. I stopped counting calories and hating my body. I found new friends who cared about me, picked me up when I was down and helped me transform from a broken little girl into a confident woman who was ready to both give love and receive it.

4. Then, I actually said “no” to getting back together.

A few months after we broke up, my ex reached out to me in the hopes of workings things out. Despite his numerous attempts to convince me to work on things, my answer was always “no.”

Of course I loved him. Seeing his name on my phone made me smile brighter than I had in months. But there was just a piece of me that felt like the journey to discover my true self wasn't quite over.

It was New Year's Day when I woke up with that feeling of readiness I had been waiting for. Something in my soul and heart just felt an indescribable kind of preparedness. So I called him.

“I want to work things out and see where this goes. I'm sorry it took me so long,” I said, oh so nervously.

His response? A joking, “You're pulling my arm.”

This was the moment where I confirmed that seven months ago, he was the one who got away. But from that moment on, neither of us was going anywhere.

Everyone keeps asking, “So, did you pick up exactly where you left off?" The answer is, “Kind of, but not really.”

I think it's safe to say that from the moment we met at age 18 in my cousin's hair salon, we've had an indescribable journey of twists and turns and ups and downs, just as any relationship does.

But I know that if we had picked up where we left off, I wouldn't be writing this post. We both wanted to move on from the place the relationship ended and begin anew. We want to offer our best selves to one another for the first time.

The biggest mistake that couples make when they get back together after breaking up is focusing too much on what happened: the hurt that had been dealt and the hearts that had broken. You can't do that.

Love isn't a game of keeping score. It is a high-stakes bond in which we test how safe we really are with someone. It's where we surrender our hearts, unveil our deepest insecurities, confront our fears and promise to always provide the other person with the things he or she needs to feel safe in return.