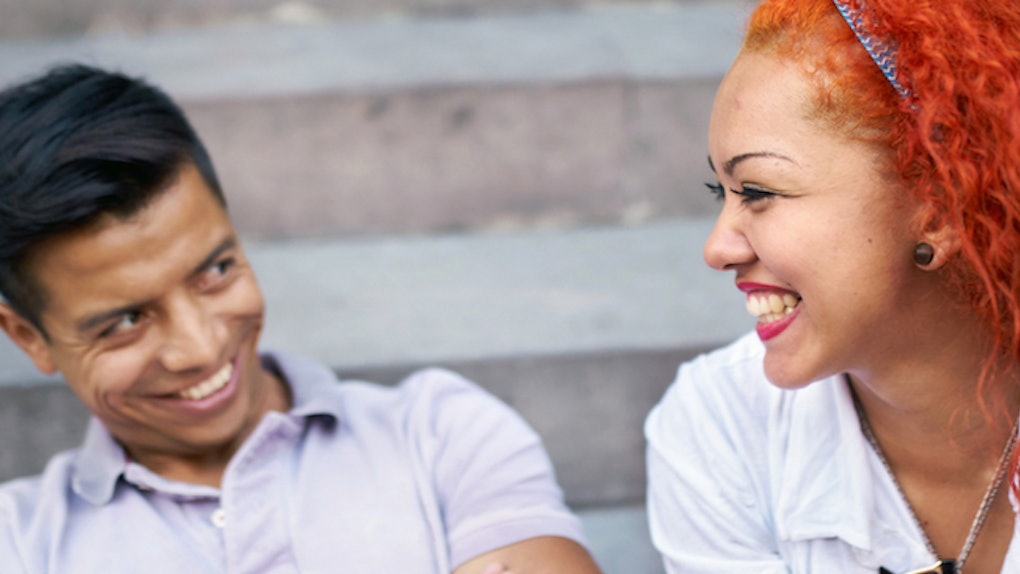 I never really know what to do when it comes to how to act on the first date.

Do I tell him the entire story of my life from the second I was born, up until now, or do I try to play it so cool that he doesn't even know if I'm interested at all?

I usually go to such extremes either way — playing it so hot or so cold — that I never end up hearing from my first dates again.

What I'm saying is this: I'm not always sure how best to act on the first date.

So I asked Karenna Alexander, matchmaker and dating coach, about some subtle things you can do on a first date that'll make your date desperate for a second one, and she had some pretty great ideas.

So I shouldn't show up to a date in sweatpants and a sweatshirt?

"Many women dress down on a date, in sneakers or casual preppy wear. They are young and beautiful but dress like a soccer mom while on a date," Alexander says. "Nothing wrong with soccer moms, but when you are on a real date with a guy and want to make him desperate for a second date, you want to look hot!"

But don't think about it as getting dressed up for him. Looking great will also make you feel great about yourself.

Some suggestions on how to dress? Alexander says to play up the "feminine touches": "long hair, heels, makeup (if you can pull off false eyelashes, go for it!), hoop earrings, form-fitting clothes, and showing a little skin."

Don't linger around and hang out for as long as he wants. Cut it short, so he has to make a second date if he wants to see you again.

"Always leave a guy wanting more. Men can get bored quickly, even with gorgeous women. So the best thing you can do is nicely end the date, saying 'I had a great time, have a big day tomorrow, I have to run.'" Alexander says.

That'll almost guarantee you a text letting you know he had a fun time, and asking you if you want to go out again. Men are simple. They love a chase.

"No need to make any overtures, like touching him, or complimenting him. Make him wonder whether you are really interested in him," Alexander says.

Men immediately run away if they sense you might be smothering them — or they'll just think you're an easy hookup and move on:

They may be flattered if you make an overture. They may even see it as a sign that you are interested in sleeping with them. And they may ask you out again hoping to get you to sleep with them on a second or third date. But most alpha guys really want to be the one to make the first move. When it comes too easy to a guy, the chase is gone and so is the spark.

Make them work for your attention instead.

4. Let Him Do Most Of The Talking

If a guy doesn't learn everything there is to know about you during date one, then he'll need a second date to figure out what you're all about.

According to Alexander, being "a little mysterious" will help you out in the long run.

"If he asks how dating is going for you, for example, don't give him a book. Don't tell him he's the first date you have been on since you broke up with your ex one year ago," she continues. "Tell him dating is going well [and] let him wonder who else is pursuing you."

This tip doesn't just apply to dates, either. You should also consider it if you might be over-texting someone — less is always more.

Dating should be fun. Once you get to know one another more, then you can get into the heavier stuff. But on the first date, fun and flirty is key.

She continues, "They don't want to get into political debates on the first date, or solve world problems. If they see too much anger in you on the first date, they think in the back of their minds that the anger could be directed at them one day.

Basically, all guys want is to spend some time with a girl they like, so they can "get to know her slowly."

When it comes to the first date, slow and steady wins the race. Be fun and flirty, a little bit mysterious, and always leave them wanting more.

Men like a little bit of a chase, so sit back, relax, and watch them run.