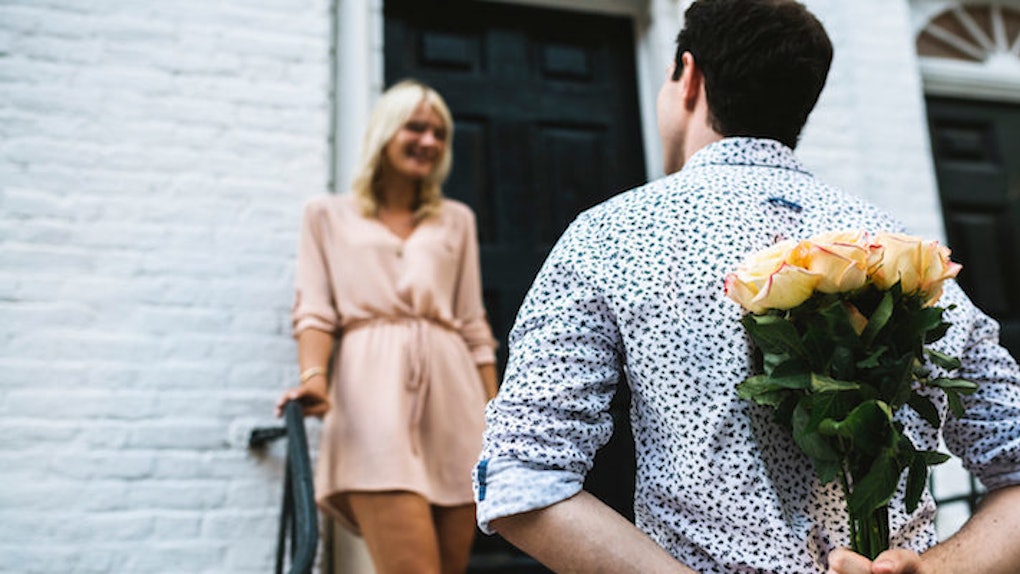 9 Questions All Guys Ask Themselves On A First Date

First dates are naturally awkward. There's an unspoken understanding that we're all going to just pretend it’s a low-stakes night of having fun and joking around with someone new and not an audition for the role of romantic/sex/life partner. That’s some nerve-racking pressure.

So, while guys might pretend to be cool and collected during the date, behind the scenes, we’re more neurotic than a Woody Allen character. And these are the questions we ask ourselves throughout the entire experience.

While we’re well past the era when everyone involved assumes that the man pays for the date, the question of how to deal with this situation hasn’t been fully settled yet.

Of course, most guys will still at least offer to take care of the check, but what about when she says, “No, that’s not necessary”? We become something akin to a deer in headlights, if said deer also suffered from a crippling anxiety disorder and a conflicted relationship with its own masculinity.

These are tricky waters to navigate. If we immediately accept our date’s offer to split the cost, we run the risk of looking like something less than a perfect gentleman. If we override her objections, we might come across as a stuck-in-the-past traditionalist who’s still getting used to this idea of women having, like, jobs and independent thoughts and sh*t.

I usually say, “I asked you out, so it’s only fair that I pay,” but that doesn’t make this question any less stressful to grapple with.

Men’s-interest publications have gotten a lot of mileage out of the “How to read her body language” article. The appeal is pretty clear: Guys want to know what kind of impression they’re making on a first date, and until we develop mind-reading powers, spotting subtle cues in a girl’s body language is our best shot of doing that.

OK, maybe you can be a little creeped out.

Taking the above behavior a step further, plenty of guys are just as concerned with their own body language as they are with their dates'. We’ve been pretty inundated with tips: Maintain eye contact to seem confident, but don’t go overboard, or else you’ll look like a serial killer; lean back from her so you don’t come across as needy, but also sit up straight so you can project an alpha presence; smile a lot, but also don’t smile too much, ya f*cking weirdo.

Trust me: Learning to walk was easier than learning how to be a normal human during a first date.

4. Am I talking about myself too much?

It’s a fair concern to have. To be an interesting person, you can’t make every conversation about you. Sure, your date wants to learn more about your life, but that doesn’t mean you should treat this date like your own personal episode of “Inside The Actors Studio.”

Striking the balance between sharing yourself with someone new and showing a genuine interest in the other person is a skill that’s hard to master if it doesn’t already come naturally to you. Guys who aren't naturally adept at socializing will worry about this even more on the first date.

Because, on the flip side of that, we wonder…

5. Am I interviewing her?

Being conscious of the fact that no one wants to spend an evening talking exclusively about you is a step in the right direction, but you can definitely go too far in the other direction. It’s nice to show interest (and shows you're not a self-centered jerk), but if you’re doing so by subjecting a woman to an endless barrage of pre-planned questions, she’ll feel less like she’s having a fun, romantic night and more like she’s on the witness stand.

6. What’s she going to tell her friends about me?

First dates for women seem to be like a mission in a spy movie: Before the night, they plan out every detail with their trusted team, creating a strategy to achieve their goal, coming up with backup plans if the whole thing goes south. Afterward, they report back to base (apartment), giving their associates (friends) briefings on what went right, and what didn’t.

And guys can be prideful. We’re not comfortable knowing someone we may or may not have charmed is going to give a detailed rundown of the night to other women. Sure, if the date went well, there’s no problem. But it’s not always easy to tell if she had a good time or was just being polite until she could finish up the evening and breathe a sigh of relief, knowing she won’t be seeing you a second time.

With online dating, the risk of first-date disappointment is at an all-time high.

In the past, unless you were being set up by friends, you had to actually meet someone before going on a date. In other words, you had a basic idea of what you were dealing with.

Now, you’ve got a handful of photos, perfectly composed to make you look far more attractive than you actually are, along with some brief snippets of what can hardly be called detailed information.

She has a vague sense of who she’s meeting. But her expectations may be entirely off the mark.

We know that, so we spend the entire date hoping she’s pleased with the real person she’s now forced to spend the next hour or so with.

The only thing more awkward than being disappointed with your date is being the disappointment.

This question has not become any easier to answer in recent years. The lines have blurred on which dating apps are strictly for hooking up and which are for finding a lasting relationship, and knowing how a date should end is becoming increasingly difficult.

It’s hard enough to gauge whether or not she’s having a good time. Now we have to try and figure out what she’s interested in.

Does she want to end the date with a hug and a kiss, or is she the type who’d want to spend the night with you if things work out? Either way is fine, but figuring out which one your date is aiming for can create some unwanted overthinking.

Maybe you were smart. Maybe you figured out, over the course of the first date, that you were both having a nice time. So, you made plans for a second date right away.

But you probably weren’t smart. After all, you don’t want to be presumptuous and put her in the awkward position of accepting your offer for date number two when she might not be digging date number one. So, you tell her you had a nice time, you go your separate ways, and then you go home to agonize and scrutinize and generally tumble into an overwhelming sea of panic and self-doubt.

It’s a wonder we still manage to procreate.