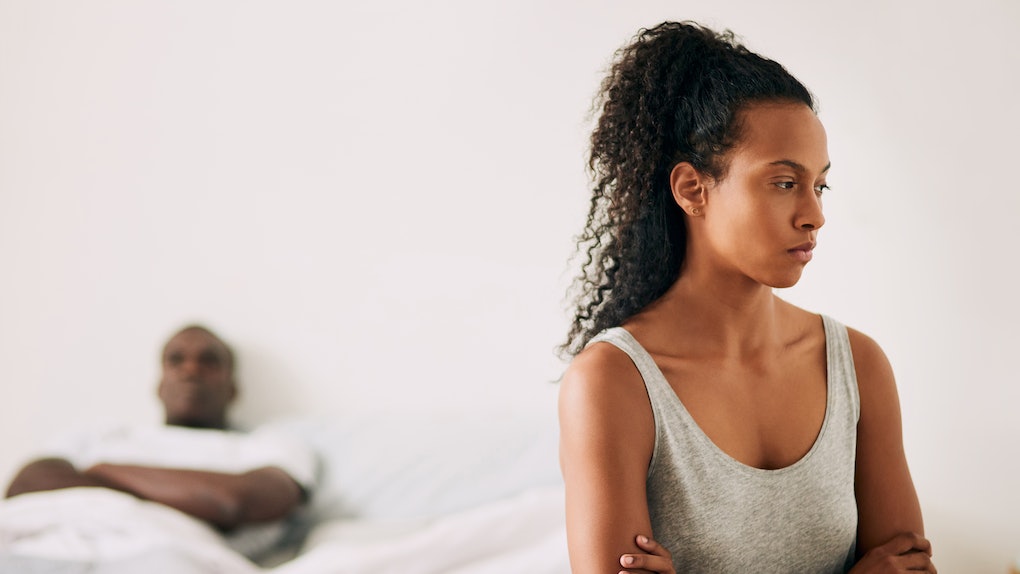 3 Signs They're Not Over Their Ex & It's A Lost Cause

I seem to have a type, and that type is men who are still in love with their ex-girlfriends. I know I should be able to spot the signs they're not over their ex, but sometimes, it can be difficult, especially because of that whole "love is blind" thing. So I just settle for being a rebound time and time again, because I remain oblivious to the fact that my partners are essentially still in a relationship with their past, instead of committed to their present — with me.

I've dated men who refuse to put up any photos of me on social media and guys who wouldn't give our relationship a label. I've been in relationships with people who didn't want to be social media official and some who were wary of doing introductions to friends. This was all before I had things like self-esteem and standards in place, but these dating behaviors were all indicative of people who both feared commitment, had ties to their past, and were unwilling and unready to move on.

So how can you tell if you're in the same predicament? I reached out to dating expert Jen Kirsch to find out the red flags that indicate the person you're dating is still hung up on their ex. It's a situation you shouldn't allow yourself to be in, because you definitely deserve better.

1. They Constantly Tell You They're Not Hung Up On Their Ex

"The guy who has to tell you it is likely is still hung up about her," says Kirsch. "If he wasn't, he wouldn't even bring her up in conversation."

If someone is continually talking about their ex with you, then they might be using you as a free therapist, not a significant other. I'd dump them, and then send them an invoice on Venmo. Get your money's worth! Your time is valuable!

2. They Don't Prioritize Your Needs

"This includes not wanting to go in a relationship with you on Facebook, or post pics of the two of you, because he doesn't want to hurt her feelings," Kirsch explains. "When two people are in a healthy, loving relationship, they take their partners needs and concerns and tend to them. The ultimate in a relationship is to ensure your partner is happy, often at the expense of your own happiness."

I once dated a guy who wouldn't post photos of me on his Instagram because he didn't want to make his ex jealous. He said she was the sensitive type, and he didn't want to do anything to hurt her feelings. In hindsight, yeah, that was a bad sign.

While we should be respectful of our past, we shouldn't be a slave to it. And if you're rearranging your relationship around your partner's ex, then most likely, they still haven't moved on.

She continues, "If he doesn't feel comfortable with you posting pictures of the two of you, or worse, he tells you point blank that he doesn't want to make your relationship known on social because he doesn't want her to get upset, that's a huge flag. He's putting his ex's potential feelings before yours."

3. He Wants You To Delete Something You Posted About The Two Of You

"I once dated a guy whose ex and her friends read all the way back in the abyss on my tweets and articles past to try to get a 'read' on me," Kirsch recalls. "When his ex found a tweet of mine that she assumed was about her, she asked him to ask me to delete it. And he did."

She continues, "I must say, it was a great warning sign — not about her or her behavior, because that has no effect on me, but on the guy. It showed me not only did he listen to her concerns about his current relationship, but he believed they mattered more than my freedom of speech or my actions."

It correlates to the prior point that if your partner is putting their ex's needs before your own, then they definitely haven't moved on from their past relationship. While we should respect and honor the people we used to love, we also have to leave them behind once we've started dating someone new. Boundaries are important once you start developing a relationship with a different partner, and if you don't have them, your new relationship is bound to fail.

If there's one thing I've learned, it's that there is no competing with an ex. Someone who is still hung up on their past is looking for nothing but free therapy and a rebound — something to keep them busy while they pine over their past and hope their ex will take them back.

If you think the person you're dating still has feelings for someone else, then they probably do. Intuition is a powerful tool, especially when it comes to romance.