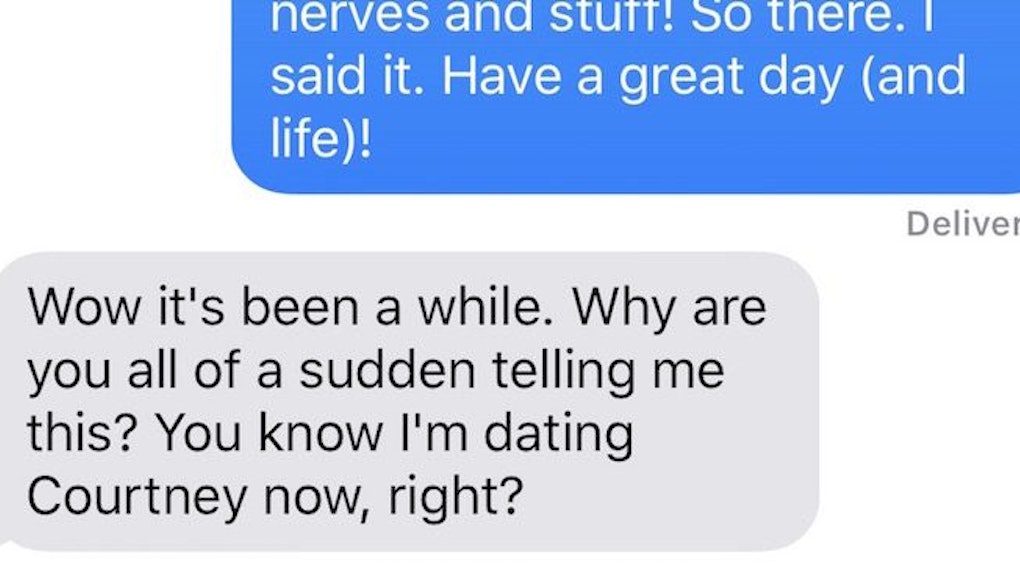 I'm in the middle of my final year as a 20-something, and one thing I'm feeling, aside from old, is this notion that I don't care about certain things I used to care a lot about.

In my early 20s, I collected friendships like one would collect stamps so that I always had a tribe of BFFs to go to a bar with, see a movie with, or group text whenever I felt lonely. I cared about making sure life never felt stale, and no Friday or Saturday night was left open on my calendar. I cared about keeping my cool around my crushes. If I liked you, I was usually too shy, too proud, and too awkward to let you know.

But I don't care about any of those things anymore. Mostly, because as an almost-30-year-old, I have more important things to care about, like taxes, paying rent in New York City, and trying to put my best self forward in my long-term relationship.

So one Friday night, spent gladly alone on my couch watching reruns of Gilmore Girls, I had a thought. What if I told the handful of guys I had a crush on in my 20s that I used to like them? Why not come clean so that I can spend my 30s knowing I've made amends for my heart?

Plus, I was really bored and wanted to potentially stir up some drama. Again, it was Friday night, and I was alone watching Gilmore Girls.

Here's what happened when I mustered up the courage to reach out to babes I used to crush on hard, but who never had any idea. (By the way, I stopped talking to each guy after I sent my crush text. It felt awkward to continue on.)

Right after I graduated college, I met this guy who was the weirdest person I ever met. So naturally, I fell in love with him.

I admired how he said whatever he wanted, dressed a little funky, and made me laugh by saying the strangest things about common objects like faucets, street signs, or jello. He also had a reputation of being a little bit of a player who was always dating a new girl. I kept a distance from him so that he wouldn't see me as just another person who adored him.

One night, we hung out alone. We spent two hours talking in my room. We didn't touch, kiss, or even sit on the same side of the bed. When he left that night, I realized, Wow, I'm totally in the friend zone. He doesn't like me at all.

It was annoying when I admitted that I liked him that he said he liked me, too. Though I'm in a relationship now and happy with my partner, I was beating myself up a little bit because I wish, back then, I wasn't so timid about sharing my feelings. It got me nowhere in the love department. Instead, it made me fill up with regret for years and years over not telling this guy I liked him when I did.

In my college days, I had this one guy friend who always seemed to be around. He was best friends with a few of my friends, and super good-looking. I was always too shy to say hello or talk to him. We never spent much time together alone.

He seemed to be always dating someone long-distance, and my friends found it weird that we never met this mystery person. I always thought he and I would be a good match, but I never admitted my feelings to him or my friends.

Was I shocked by his response? No. A part of me thought in college that he might not have been straight. I know I'm being stereotypical here, but he was always well-dressed, loved all the girly shows we all watched and gossiped over, and had zero interest in making guy friends. Those were the things I kind of liked about him, though.

I was definitely a little embarrassed that he remembered how I never spoke to him.

3. The Pure And Utter Shock

One of the first guys I had a crush on in New York City was a co-worker of mine. The problem was, he was my only co-worker. We worked at a company of three: him, myself, and my boss.

I couldn't tell him that I was falling for him because I couldn't risk losing my job. What if he was repulsed by that? What if we did start dating and my boss wasn't cool with that and fired only me because I was the newbie? That fear alone was enough for me to keep my mouth shut.

Spilling my guts to him about my feelings was the hardest because I truly wondered if he ever had any idea or felt the same. Unfortunately, his response had no mention of similar feelings, but he did mention that's he tied up with someone else — one of the clients we used to do work for. All I could think was, Why did he never have a crush on me, and why did he pick someone else instead of me?

I was glad I spilled my love guts to him, but would be OK if we never spoke again.

I had a crush on this guy during my senior year of college. We met one or two times through mutual friends, but we never hung out alone, and we never talked much. He gave me his phone number because we were both taking the same English class, just at different times during the week. We had made tentative plans to get together and "study," but my nerves got in the way and I never reached out to make those plans. But neither did he.

I texted him, finally, almost seven years later, admitting that I had the feels for him.

He never ended up sending me anything back. I felt a little stupid. I felt like maybe I shouldn't have reached out to this person because maybe it was a bit too random and a bit too buried in the past. I wonder if he even remembers who I am? I hope not. I'd kind of rather him think he mistakenly got a text from a girl named Jen Glantz than remember me.

I'm glad I did this experiment. If anything, it made me realize that when you feel something, say something. Don't wait for time to pass. You never know who was also crushing on you — or even better, who isn't crushing on you because they are crushing on the opposite sex.