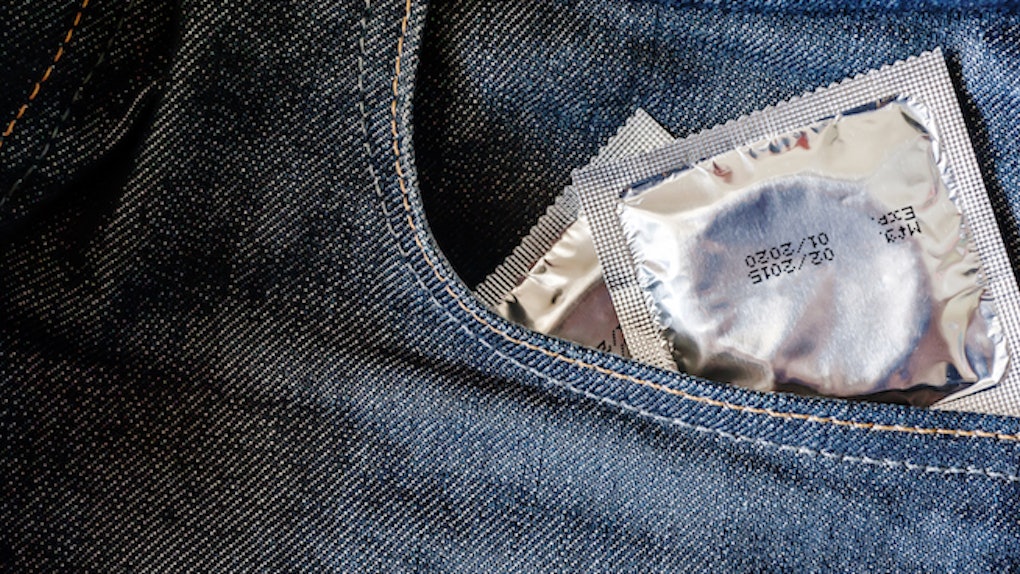 Should You Stop Using Condoms?

If you're in a committed relationship, chances are you're having a lot of sex.

After a long period of sexual exclusivity, you may begin feel like condoms aren't the most fun, or necessary, thing to be used in the bedroom.

If you've found yourself in a relationship where you and your partner aren't sleeping with anyone else, the extra steps of throwing on a rubber can feel obsolete.

On the other side of things, even if using a condom during sex isn't the most enjoyable precaution, condoms are very effective at preventing STIs, and are pretty valuable tools in your sexual health arsenal.

Before you go ahead and officially throw away that box of Trojans for good, here are a few questions you should ask yourself.

1. Do You Feel Like You Can Talk About It?

First and foremost, you need to ask yourself if you feel comfortable talking to your partner about ditching the condoms. This is a sensitive topic area for any couple, and if you can't talk about it, you probably shouldn't be doing it.

If you're worried about how your partner may react (or if they may overreact), this could be a sign that you aren't in the best place to cease your condom usage. Having doubts is a reason to reconsider.

There should be enough trust not only to have the conversation, but also to feel like you'll be in a good place regardless of the outcome of it.

Being able to clearly communicate your thoughts to your partner is the hallmark of a healthy relationship.

If you can do that, it means you are in a good place to talk about important decisions, like whether or not to stop using condoms.

2. Have You Both Been Tested?

A huge benchmark of whether you'll be safe if you stop using condoms is if you've both been tested.

While it's nice to trust your partner, it's also important to get the medical assurance that you're both healthy and STI-free. After all, sometimes people with certain STIs can be asymptomatic, or be infected by something that is dormant for months, or even years.

Your partner may never even know their own true status.

James Preece, dating guru and relationship expert, says, "If you are going to stop using condoms, you are going to lose your protection from sexually transmitted diseases. Before you rush into having sex, you'd better make sure you've both been tested."

It's better to be safe rather than sorry. Tests are painless and quick so if he refuses, you'll have to wonder what he might be hiding.

If your partner isn't into getting tested, this is a reason not to stop your condom usage.

Make sure you're both on the same page.

3. Are You Both 100 Percent Committed To Monogamy?

It's best to be committed to monogamy (or, if you're non-monogamous, on the same page about using protection with everyone else) before you stop using condoms.

If you've talked about it and have been tested, it may seem like a no condom no-brainer, but having sex without condoms is an on-going conversation, not just a one-time thing.

In order to figure this out, the only thing to do is have an open conversation.

If your partner has other partners, is there enough trust to believe they'll be safe even when you're not around? Are you comfortable enough to not use condoms knowing your partner is sleeping with someone else?

"If you are ready to ditch condoms, then it's usually because you are both in a committed relationship, or just want things to be more natural," says Preece. "However, you'd better be sure that it's only you they are sleeping with. No matter if they have been tested, you don't know what they could be bringing you."

Preece believes not using condoms in non-monogamous relationships could be a bit risky, but ultimately, it's your call.

4. Are You Using Another Form Of Birth Control?

Even if you've been reassured on the STI front, there's still the worry of getting pregnant if condoms are not being used during sex.

If you aren't looking to have a child anytime soon, you should make sure you have another form of birth control on deck.

The use of oral contraceptives, also known as "The Pill," is a go-to for many women. If swallowing a daily medication isn't your thing, you can always use a "set it and forget it" form of birth control, like an IUD.

Either way, it's best to think ahead and plan this out before deciding to nix the rubbers in the bedroom.

After all, better to shell out money on condoms than car seats and baby formula.

5. Can You Handle Any Potential Consequences?

Even with all the planning in the world, you'll never know what could actually happen if condoms aren't used.

Anything could happen, whether it be catching something from a cheating partner, or your alternate method of birth control failing.

Before you decide to completely stop using condoms in your relationship, make sure that you are prepared to deal with any possible aftereffects.

The reality is that anything could happen even when you are using condoms, so you should have this conversation with yourself anyway.

Be prepared to deal with anything and everything that may come your way.

Stopping the use of condoms in your relationship is a very big decision. Before you do it, you should make sure you've assessed all the different factors involved.