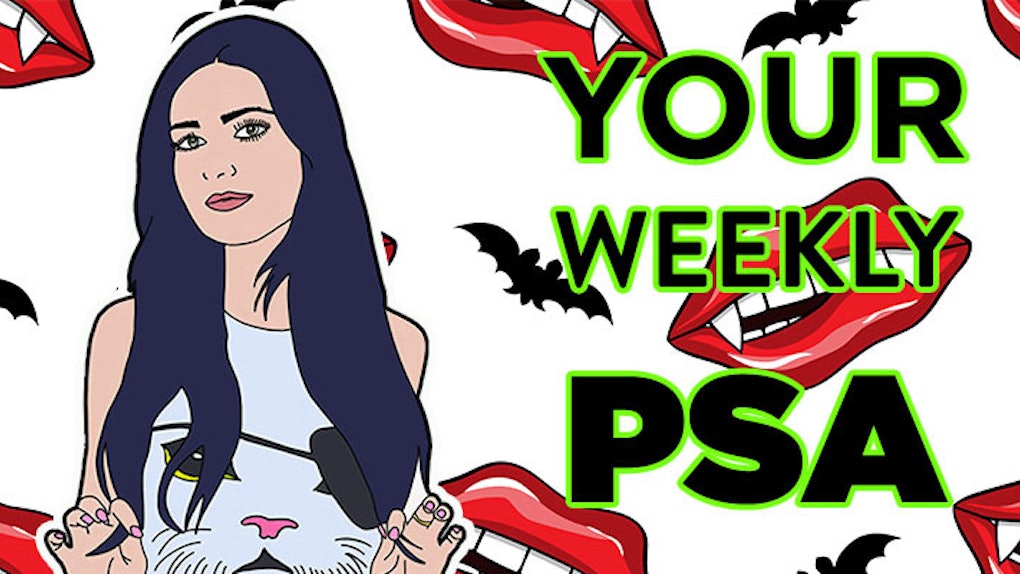 I love, LOVE Halloween with every fiber of my 30-year-old BEING. I've always loved Halloween because I love any excuse to dress like a slut.

And I love to wear pastel wigs, false lashes, silver chrome lipstick, lots of sparkly, glittery makeup all over my body,  plus all of those tacky accessories I wish I could wear IRL, like fairy wings and ripped tights.

But there is a very specific mistake we're all super vulnerable to making on Halloween. So here it is, my Halloween Weekend PSA:

Don't fuck your ex tonight just because they're dressed like Jesus. They're still the toxic devils they were yesterday, and a Jesus costume is precisely just that: a COSTUME.

Don't fuck your ex tonight just because they're dressed like Jesus.

Maybe they're not dressed like Jesus, and maybe they're not your "technical" ex. Maybe she's dressed like Tinker Bell, and she's a former hookup from a year ago, who told you she had deep and passionate feelings for you, only to ignore your texts and phone calls the next day.

Maybe he's dressed like a cool-looking Tim Burton character. And you never really even dated him, but you gave him head, and he gave you oral herpes in return. I don't know. I don't care. You get the point.

The bottom line is, these jerks are still there jerky selves, even if they look like entirely different people on Halloween.

Tear off that sweet Tinker Bell costume, and she's still the heartless bitch who hurt you. Strip off that hipster-chic Tim Burton outfit, and he's still the fuckboy who gave you an STD and didn't even apologize when you called him out for it.

Jerks are still there jerky selves, even if they look like entirely different people on Halloween.

It can get confusing when people are dressed in costume. I mean, we're such visual creatures, we can get tricked easily when someone's sporting a radically different look.

You might think I'm being dramatic, but I've had so many bad hookups with venomous people on Halloween just because I was totally thrown by their angelic, funny, cool or gothic costume.

One time, I was at a Halloween party — a juvenile, hipster party in some hipster boy's backyard somewhere in the San Fernando Valley.

I was maybe 19 at the time, and my college friend Sue* and I were there, drinking cheap vodka out of plastic cups. (Ugh, I don't miss those days at all. Liquor tastes so much better when it's got a designer label and consumed out of a glass.)

I'm pretty sure it was the year I dressed up as Courtney Love with a babydoll dress, blonde wig and smeared, blood-red lipstick. Actually, it wasn't all that different from my look at the time; it was really just an excuse to wear a blonde wig.

Sue was dressed as Kate Moss (the year of the "Cocaine Kate" scandal) and lined her nostrils with white talcum powder. Poor taste? Maybe. But hell, we weren't even 21 and had no idea what a moral compass was (still don't).

Sue had been almost six months free from a devastating, toxic relationship with her ex-BF Mark*. This party was going to be the first time she laid her blue-green eyes on him since their breakup, but she wasn't nervous about it at all.

She was in that post-breakup bliss phase, where she was glowing and finally feeling good and single again.

"I'm so over that dickhead! I don't even care if I see him at all. Plus, I'm not even into men right now. I think I might be totally lesbian," she proudly cooed to me on the taxi ride to the party.

"Are you even bisexual?" I asked, suddenly intrigued because I had a little crush on Sue and I secretly hoped she played for my team.

"Nah, I don't think so. I thought I was bisexual, but I'm actually probably a lesbian. I'm way more into women, I think," she flirtatiously purred at me, the fake white powder under her nose gleaming as the suburban streetlights lit up the backseat of our shiny, black town car.

I sat the rest of the ride in silence. The moment I'm bestowed with a tiny crush, I shut down.

But Sue was wild, and on a completely different level than I was. God knows what kind of drugs she would be on, and I wasn't in the mood to talk to someone who was tripping out on acid, going on and on about how the moon was giving her a dirty look, or some other druggy nonsense.

So, when we finally got to the party, I started talking to a different girl — a girl I actually liked, not some Kate Moss friend-crush — while Sue went off to do her thing.

Around 2 am, I hobbled into the living room on my five-inch heels and found Sue, her fur coat pressed up against a body, her lips passionately locked on someone else's by the fire place.

I could hear the quiet flicker of flames and the drunken smacking of tongues.

"SUE!" I yelled, laughing and curious as to who she was getting it on with. It was always someone.

Sue spun her head around like "The Exorcist." "Hey, Z!"

"Who are you kissing?" I asked, as if the person wasn't even there, because I'm bitchy and I like to objectify boys sometimes.

"It's MEEE!" I heard a muffled voice squeak. The voice was familiar, but the guy looked totally unfamiliar.

It was Jesus Christ. And a good Jesus Christ, too — long hair down to his clavicles, a non-creepy-looking beard and a white robe. He looked like a holy angel in the darkness.

And suddenly, it hit me. It was no holy angel. It was that fuckboy MARK, her toxic ex!

"What the fuck are you doing?!" I cried, feeling almost betrayed. I coached her through her breakup, and there she was, sucking face with that monster, and right after she had proudly proclaimed her lesbianism, no less.

I coached her through her breakup, and there she was, sucking face with that monster.

What I saw on her face after that moment is hard to describe. I watched a woman experience a revelation in a matter of seconds. First, she looked shocked. Then, she looked puzzled. Then, she looked angry. She pushed Jesus by his shoulders, grabbed my arm and ushered us out the front door.

We got back to my apartment, and she was devastated.

"I totally just betrayed my word to myself. I promised I would never, ever talk to him again, let alone make out with him," she wailed into a pint of ice cream.

"Why did you do it?" I asked quietly, feeling disappointed in her.

"I got confused. The Jesus costume threw me."

And that was the first time I realized the true danger of Halloween no one ever talks about: We don't see people for the creeps they are when they're dressed up.

Don't let yourself fall victim to that costume, baby.

If you're tempted, imagine me at the Halloween party. I'm dressed up as Snow White, but only if it was the early '90s and Snow White was at a gothic, new-wave party.

My hair is jet-black and long, right to my waist. You wonder if it's extensions — but if it is, they're so well done, it's hard to tell. My lips are painted crimson, and my skin is pale — you wonder if it's makeup or if I'm really that colorless. "I hope she's taking care of yourself," you think.

He looks cute and funny, but he's still the same jerk-off who broke your heart.

But then, I tap you on the shoulder. My eyes are blurry because I've been drinking, but for some reason, you trust me.

Just as you decide my extensions are real because I look so authentic, I tell you not to have sex with your ex tonight. I tell you I understand he looks cute and funny (and holy, even in his Jesus costume), but he's still the same jerk-off who broke your heart last year.

I tell you having sex with an ex is the most vulnerable thing you can do, and it will set you back at least three months in your healing process.

I tell you you're better than fucking your ex and that you should go hook up with that hot guy dressed as Harry Potter instead. I tell you I know he looks nerdy, but he's fresh meat. And plus, nerds are way better in bed anyway.

And then, I drift into the air, disappearing forever, and you make the right choice as you watch me fade away into nothingness.

I'm here to save you from making all the weekend mistakes that are unraveling your life. I'm here to rescue you with my big-sister prowess.

Happy Halloween, and don't have sex with your ex, baby.