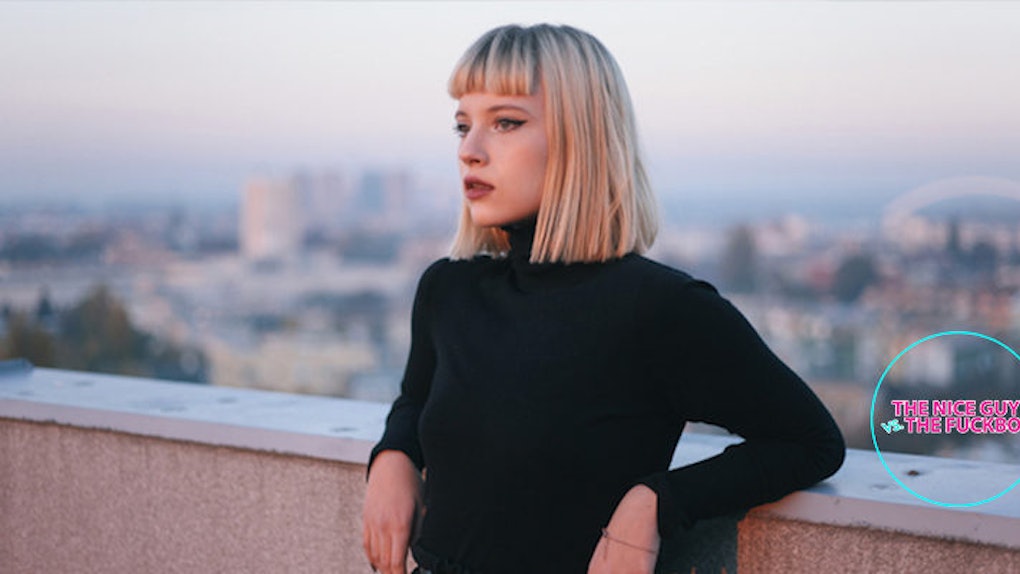 This Is How You Can Tell If You're Just A Rebound

A few months ago, I decided to give Tinder another shot after taking a year off just to be single.

I really didn't have much hope in really meeting someone there, but I thought I'd at least start putting myself out there. I ended up meeting someone who I thought was going to be more of a friend than anything. We are both 24.

After we hung out for the first time (we went for a hike), he told me that a few weeks earlier, he and his girlfriend had broken up. He said he wasn't sure what he was looking for, but if something evolved into a relationship, it was fine.

Also, he and his ex still live together. They live in different rooms and have a third roommate but still under the same roof.

At first, it didn't really faze me, but we started to talk or Snapchat every day and hang out a lot. And after the first couple of weeks, we slept together.

Since then, it's been a couple of months, and we have been the same: talking just about every day, hanging out a couple times a week and still sleeping together.

The thing is, I have started to develop feelings for him.

I've met his best friends and went to his small holiday party. And he came over to my family's house on Christmas and played board games with my parents — he even spent the night.

But, outside of when we are alone, we usually don't really act very lovey-dovey or anything. Sometimes, he says something that makes me think he sees what we have going somewhere, and other times, I feel like I'm just the rebound.

Also, I should mention that we both still have our Tinder profiles, and it's definitely possible he still uses his.

So this is why I'm asking for advice. Am I just the rebound? I'm not sure if I should stick around with him and risk the chance that he's sleeping around or he'll ditch me for someone else, or if I should just cut it off before I get more attached.

I'm having trouble finding the problem here. There's nothing he's done to make you question his feelings for you except for your own fears that you're his rebound. He's given you no reason to feel that way.

I do have one question, though: Was the relationship with his ex a long time coming or was it sudden? The answer to this question could offer insight into whether or not you're a rebound.

The longer his past relationship was in trouble, the likelier you're not a bandage for the gaping wound that was his former relationship.

The longer his past relationship was in trouble, the likelier you're not a bandage for the gaping wound.

I mean, you've met his co-workers, friends and family. Hell, he played board games with yours! You talk every day, you admit you've developed feelings for him and he says things that “[make you] think maybe he sees this going somewhere.” This all sounds very promising.

The way you speak about this burgeoning relationship leads me to believe you're the kind of person who can find something wrong in almost every relationship. This idea is reinforced in the very first sentence of your email: “I decided to give Tinder another shot after taking a year off to be single.”

This, to me, sounds like you've been hurt pretty badly by somebody. You were hurt so bad, you had to take a year off from dating entirely.

Now that you've decided to dip your toes into these choppy, uncertain waters we call dating, you're understandably skeptical. But you're skeptical to a point where it's detrimental to your own dating successes.

Aside from the fact that he lives with his ex (which most people would not be OK with), nothing seems to be out of ordinary here.

Besides, they broke up a few weeks ago, so you can't really judge him too harshly until he's been given a certain amount of time to either find his own place or for her to do the same.

For now, they're just kind of trapped with each other. If he decides he wants to continue living with his ex, that's when your skepticism would be more warranted.

As for him not being “lovey-dovey,” as you cite, this, again, sounds like it grows from your own insecurities.

He's alluded that he sees this relationship going somewhere, but because he doesn't make out while you wait for a Quarter Pounder at McDonald's, he might not like you? That sounds weird, doesn't it?

Most guys don't subscribe to PDA, so don't think his lacking lovey dovey-ness is because he doesn't like you.

You two are having sex, you communicate every day and he's introduced you to almost every person he values in his life. Susan, it's safe to say he's got feelings for you.

Now, regarding him still possibly using Tinder? That could be a problem and would be acceptable to bring up except... you have one, too.

Aside from the fact that you can see when someone was last active on the app, Using Tinder is perfectly warranted until a potential relationship is exclusive. I understand it can make you feel like he's swiping for something better, which could be the case, but there's also a good chance it isn't.

I mean, have you brought up these Tinder concerns? If not, he could have no idea of your skepticism about the app. If you do bring it up, he may deactivate his account right then and there.

My fiancée and I both took each other's phones and deactivated the other's account when we made things official. It was a ceremony of sorts — one that confirmed our feelings for the other.

So, Susan, in case I haven't made my point clear here, I think the fact that you “feel” like you could be the rebound is unfounded.

Sure, you met quickly after his breakup, but he's otherwise given you no reason to feel like you're anything less than a woman he's developing strong feelings for. You've got to be more confident in yourself or you could risk losing him.

I worry (OK, I don't really "worry" because, well, I don't really actually care, but, you know) you may be missing the forest for the trees here: worrying about his Tinder profile when he's LIVING WITH HIS EX-GIRLFRIEND.

If he's fucking anyone else, it's her.

Everyone worries so much about Tinder. Don't worry about Tinder. It gets a bad rap. People think Tinder is like Seamless, and after a few clicks, the General Tso Chicken is just going to arrive at your door in the hands of a small man hopping off his bike.

Take Jimmy, who you met in this piece and who is WAY more of a fuckboy than I am. He's the most fuckboy-ish fuckboy I know. (We stick together.)

He texted me this the other day: “Tinder and Bumble … I hate them both actually … Nothing ever comes from them … it's like an interview process …”

This is coming from a guy who has fucked more than 200 women. And he's not wrong.

It's actually way more difficult than people think to actually meet someone from Tinder or Bumble.

Half the people on there are half-assedly on there. Nobody actually wants to meet. Everybody just wants someone to initiate a conversation and to scroll. That's all it takes to light up the endorphins. It's all a damn charade.

So don't worry about Tinder. Worry more about the people in the lives of the people you love.

Your dude is living with his ex. Who does that?

But whether you're the rebound or not, this woman is going to be a part of your life and your relationship.

Don't worry about Tinder. Worry more about the people in the lives of the people you love.

You have to ask yourself if you can live with that — if you're comfortable enough and confident enough in your relationship and in yourself.

It wouldn't be weak or uncommon for you not to be able to deal with it.

Then again, I'd probably go for it and see where it leads, at least for the story. But I'm a fatalist.

Whatever you do, don't delete your Tinder. Because hey, it worked once.