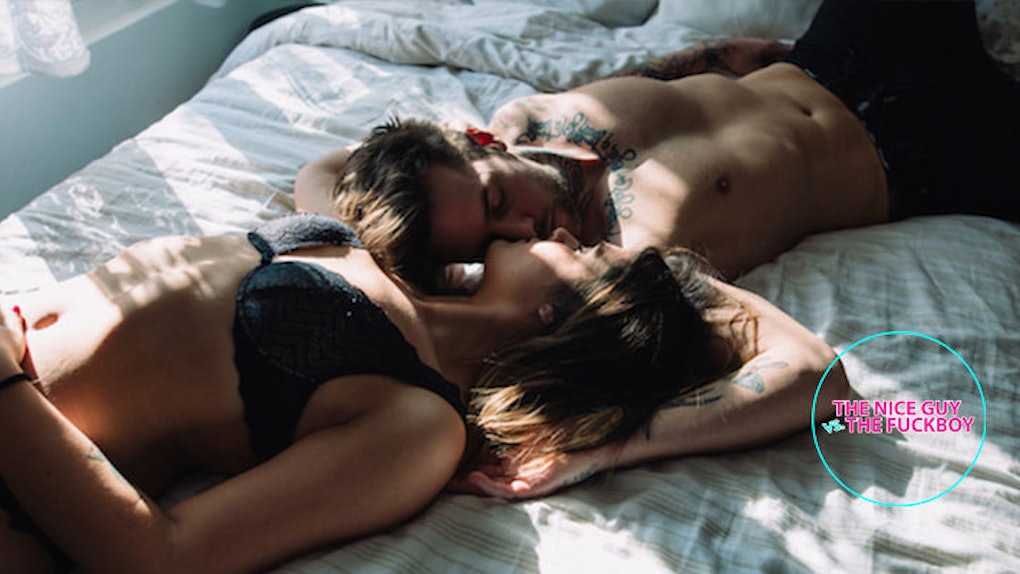 How To Tell If A Guy Is Using You For Sex

I'm Stacey. I'm 22, and I tend to look for the good in the worst of people (That's kind of why I have problem telling if he is just a fuckboy.) This brings me to Mike. (Mike is 24.)

Mike and I met at a bar and hit it off really quickly. We texted every day, went on about four "actual dates," went out with friends a time or two and hung out at his house a handful of times.

He wasn't afraid to express how attracted he was to me, how funny and cool he thought I was and all that jazz. Basically, to me at least, he was really interested in me. He even commented once about meeting my family. (Now, I'm afraid he was just charming.)

He wasn't afraid to express how attracted he was to me.

We kissed on the first date, and every other time we were together, we made out and cuddled. I waited until after about four dates to finally sleep with him. (He tried twice before this point, but he was always OK when I shot him down.)

Don't get me wrong; I wanted to, but only because I thought we were heading down a relationship road.

Anyway, after the first time we slept together, he became distant. But he still initiated conversations, even if they were short.

A month later, though, we would only hang out on Saturday nights. I knew he had a busy work schedule, but it never stopped him before.

I tried to talk about what was going on, and he told me I got too serious too fast. After that, he said he would still try seeing me, but only on his schedule.

He was hot and cold. Super confusing. I tried to pull away, but when he realized this, he tried to keep me around. I eventually told him I was tired of him leading me on, and he told me I was “overthinking.”

A day passed, and I apologized for assuming the worst in him, and he understood. But a week went by until he called me. And another week went by before I decided to give in to a late-night booty call.

After more mixed messages that night (He asked why we weren't dating yet and said maybe we can just be friends with benefits), I asked him the next day if he had any intentions of dating me. That's when he said, “He doesn't know what he wants.”

I told him I understood, that I just wanted more and to take his time figuring things out.

Was he only in it for the chase?

I guess my question is, was he only in it for the chase? And once he got it, did he just keep me around for sex? He really did enjoy my company, and like I said, our attraction wasn't a problem.

I know "I don't know what I want" is code for "if he wasn't actually interested in me, he'd be dating me by now." I have fully given up hope for him. I just wonder now if it's ever possible for a guy to actually not know what he wants? And if he actually doesn't know, why would he hurt you in the process?

It sounds to me like you've already got this guy figured out. And I have to agree, it does seem like he was in it for the chase. After he got what he wanted, the dude started to fade you out as so many a-holes tend to do.

In this instance, his behavior does point toward “fuckboy” (no offense to my co-columnist below), but let me spend the rest of my argument trying to humanize him.

I'm friends with many “Mikes,” and let me tell you, he isn't completely lying when he says he doesn't know what he wants. But you should know that it's not you. Not for the time being, at least.

When a man meets a woman who ignites that inexplicable spark in him, he suddenly knows what he wants. But until then, he's settled on the fact that maybe, just maybe, you're as close to this spark as he can possibly get.

He's settled on the fact that maybe, just maybe, you're as close to this spark as he can possibly get.

By encouraging a friends-with-benefits scenario, he's buying more time with you to figure that out. It's an arrangement with no pressure that limits the likelihood of getting hurt.

You two do sound compatible, though. You've met each other's friends, talked about meeting the folks and you've been intimate. But teasing the possibility of a FWB scenario was him telling you things won't be getting official any time soon — he likes thing as-is.

By choosing to make things “official,” so to speak, he likely feels he's exposing himself to promises he can't keep: to love you as you deserve to be loved, to be faithful and so on.

If he's unsure about his feelings for you now, but he concedes to having a relationship with you, you're going to be even more hurt when he finds out the spark he hoped for fizzled instead.

But let's get something straight here: Opting for FWB when you've made it abundantly clear you want something more is a selfish move on his part. He wants to reap all the physical benefits of a relationship without any sacrifice.

But since you've already “fully given up on the guy,” I wanted to give you some additional advice from somebody who's — reluctantly — closer to 30 than he is to 20.

Stacey, you're young. Before most guys hit 25, we are, for the most part, selfish assholes. We want to get laid and establish ourselves in our careers. Those are our primary objectives.

Before most guys hit 25, we are, for the most part, selfish assholes.

Relationships at this point of our lives tend to get tossed to the backseat, like a grocery bag of nonperishables.

The closer to 30 we get, the more our attitudes toward sex and companionship mature, and we seek something more substantial. We've gotten laid enough to know sexual intimacy and passion is what makes the act meaningful. And hopefully, we've established ourselves in our careers at that point.

So what I'm saying is, you're 22 for crying out loud. You're going to meet a lot more assholes (frogs?) before you meet that fabled Prince. Take them for what they are, and try your best not to get hurt in the process.

Your Prince is out there, but he's probably still an immature frog at this point.

Let's answer your main questions first before jumping into a larger discussion about ethics.

1. Did he just keep me around for sex?

Sounds more like he fazed you out. Sounds like he figured, "Sure, I'll try because why not? If she's into it, cool, but I can live without it if she isn't."

2. Did he enjoy my company?

For a time, yeah, probably, at least until you started projecting that WHEN ARE WE GOING TO BE IN A RELATIONSHIP stuff as transparently as you did in your letter to us.  I'm taking an imaginative leap here.

People can enjoy another's company one minute and be completely done with them the next. You're talking to a guy who was once kicked out of a girl's bed at 5 am in his underwear, literally three seconds after making her keel over with laugher, because of one wrong word.

People can enjoy another's company one minute and be completely done with them the next.

3. Is it possible for a guy to actually not know what he wants?

It's more or less our default state. Just because we use it as a convenient breakup excuse, doesn't make it any less true.

You know how girls say, “Let's just be friends,” to put someone down easy, but they really don't mean it? Well, we say, “We don't know what we want,” for the same reason, except we do mean it.

4. If he doesn't know what he wants, why hurt you in the process?

Why date? Why try other people? Because if he doesn't, he'll never figure out what he wants.

This is chicken-and-egg stuff. If the only way to not hurt every girl we go on four dates with is to commit to her, then what's the alternative? Sit home and stare at the walls? Keep ourselves caged to avoid the possibility of a girl liking us more than we like her?

Someone always gets hurt in the end. And it's usually the girl who waits four dates to have sex. When you do this, it feels like you're buttering us up for something. It feels like you're saving us for some predetermined date sometime in the future.

We know right then that you want something long-term, no matter how much you say you're just into having fun or that you're not trying to settle down either.

Once you did that to this guy, he knew. But by that point, he wasn't going to not wait to have sex. He'd already invested some time and money into this, and it would be silly to quit now. But even before you had sex, he knew his intentions didn't match yours. That's why he left when he did.

Now, I really don't think this dude did anything wrong. In fact, I think he very deftly didn't do anything wrong. He ended things strategically, while allowing himself plausible deniability. Unless he mistreated you, unless he hit you, etc. But I read your letter over a few times, and you didn't mention anything like that.

It appears the only misdeed this man did was not liking you as much as you thought he did. And while that sucks, it doesn't really rank him highly among the biggest douchebags.

It appears the only misdeed this man did was not liking you as much as you thought he did.

I don't get to read what Bobby says beforehand, but I assume he'll say what all your friends did: They'll tell you he's an asshole and that he didn't deserve you.

And since it's the damned who write the history and lexicon of dating, maybe he is. Maybe he is an asshole just because you say he is or because he didn't act the way you wanted him to.

But you're going out on a ledge every time you meet someone new, and you know how creaky that plank can be. He's not an asshole because he faded away.

I would be delusional if I told myself every girl who ever hurt me — who ever didn't like me — was a bitch. A whole world of bitches, prancing around and conspiring against poor little me.

At its simplest definition, dating is trying. That's what we should really call it. I'm trying you out, and you're trying me out. We're human tricycles beeping down the aisle at Toys R Us. All of us rode a few that we put back on the shelf, even when we were 6.

What men and women can't agree on is how long constitutes a “try.” This, it seems, is the main gender fission point.

Dating is trying. That's what we should really call it. I'm trying you out, and you're trying me out.

Men think of trying in the micro, whereas women tend to consider trying more of a longform endeavor. He probably thought four dates – that he most likely paid for – constituted enough of a try. He probably thought he shouldn't keep funding something he didn't see a future profit in.

On the flip side, you probably think he didn't even give himself a chance to get to know you, which brings us all the way back to your first question: Does he know what he wants?

Well, he knows what he doesn't want, at least. And I'm sorry, but that's something.