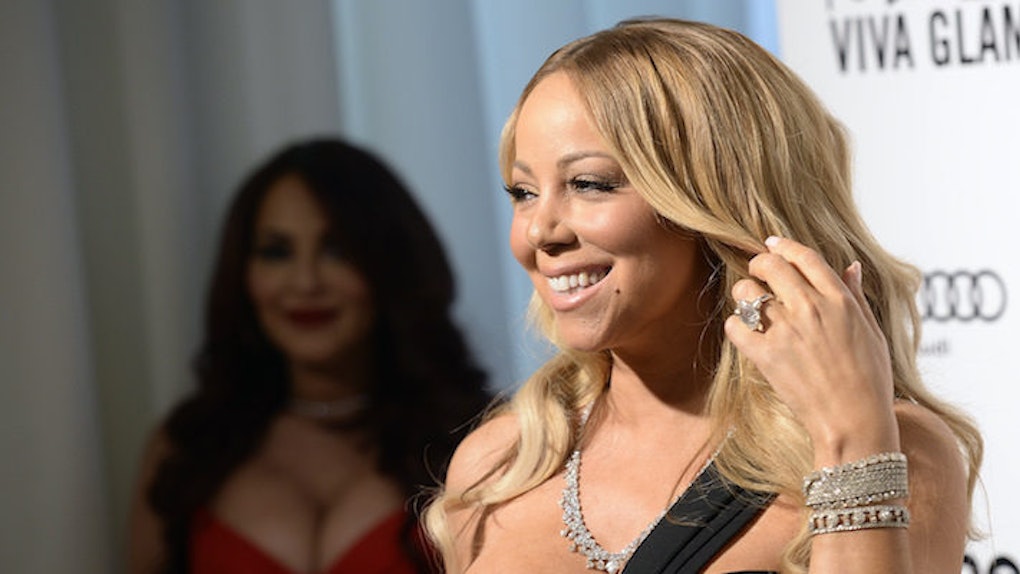 Should You Give Your Engagement Ring Back To Your Ex?

Back in January, Mariah Carey got engaged to Australian billionaire James Packer.

Packer proposed to her with a casual $10 million ring, which is pretty normal, as far as billionaire pop star diva romances go.

But then, he called off the wedding. And not just the wedding... but the entire relationship.

So what's to be done with that FAB ring now that their relationship is no more?

On Sunday's episode of "Watch What Happens Live," host Andy Cohen asked Mariah if she plans on giving back the engagement ring.

To which Mariah casually responded by asking, "Why?"

You can watch the queen of shade throw all the shade below.

Well, Mariah, I could think of a few reasons to give an engagement ring back to an ex, just off the top of my head...

Maybe you give the ring back because you want to end on good terms, and this is your peace offering.

Maybe you give it back because he asked for it back.

Maybe you give it back because you're a strong, independent woman who wants nothing to do with him or his stupid gifts after he essentially set your heart on fire.

Personally, I wouldn't give it back if some douche lord publicly shamed me by abruptly ending things while I was in the middle of planning our WEDDING.

So, Mariah, I get it. I'd keep that shit, 100 percent. No doubt about it. If I were as rich as she is, I'd sell it and donate the money to charity.

But I'm definitely not rich, so I'd sell it that baby and buy myself a swaggy house.

If we ended things on a good note — or if our breakup was totally my fault — that's a totally different story. I'd definitely give it back. No need to break his heart and burn a $10 million hole in his pocket.

But I was curious about what other people would do, so I asked my friends and family (yes, both my mom AND dad are included) what they'd do.

And I got some pretty good insight:

If she was as rich as Mariah, she'd give it back.

I don't know any details about their relationship because she's irrelevant any time of year besides Christmas. But if I was my poor self as of now I'd keep it and retire. If I was as rich as her, I'd give it back to make a point. Stick it to the man!!!

Mariah Carey's irrelevant any time of year besides Christmas.

I wouldn't give the ring back, either.

He sees the ring as a silver lining.

When relationships end, all you've got left are the memories. Better to be stuck with a $10 million dollar one.

She would offer to give it back, but wouldn't really mean it.

I would offer and expect him to be gentleman enough to not take it... because, like, I wouldn't be engaged to a prick like that. If he actually took me up on it, I'd probably cause a scene and make him feel like scum.

I would offer and expect him to be gentleman enough to not take it.

She'd turn it into a necklace.

I would not give the ring back. I'd chop it into a necklace.

She thinks it depends on who broke up with whom.

If I broke things off, I'd give the ring back. It was a sign of the agreement to get married, and I broke it. It's not like I'd keep wearing it, anyway. If he ended things badly, I'd sell it and go on a baller trip with my friends to the Maldives.

If I broke things off, I'd give the ring back.

She'd keep it because $10 million is nothing to a BILLIONAIRE.

He's a billionaire. He's not going to miss the money... I'd keep it.

She's keeping it, no question.

She'd keep it no matter who did the breaking up.

Well, if he broke up with me, I'd keep the damn ring because that shit is hella emotional. And you know what I'd do? I'd sell the shit outta that thing and buy myself some therapy. If I broke up with him, it was probably for a very good reason and wouldn't want any link to him. So I'd sell it and donate the proceeds to charity. Actually, either way, I'd donate proceeds to charity because if I'm Mariah Carey, there's no need to be a greedy ass hoe.

I'd sell the shit outta that thing and buy myself some therapy.

He'd use it as a PR opportunity.

They're both so rich, I don't think it's even about the cost of the ring at this point, just the principal of if you're gonna be an asshole, I'm not giving you the ring back. If I was Mariah, I'd sell it and go build an orphanage for some good PR! But more likely she'll sell it and buy herself a yacht.

If I was Mariah, I'd sell the ring and go build an orphanage for some good PR!

She's absolutely not giving it back.

She'd donate it to a charity they both loved.

I would return it or sell it in an auction (with his blessing), and donate the proceeds to a charity we both like in my kids' names.

She'd keep the ring as a form of justice.

Nope. He's a billionaire, and he broke up with HER.

She doesn't care about the money, it's the fact that it was a gift.

I don't care how much it's worth. It was a marriage; it was a gift. I wouldn't give it back!

She knows she's worth more than some dumb ($10 million) ring.

I'd give back the ring if he wanted it. I'm the gold, not the gold digger.

I'd give back the ring if he wanted it. I'm the gold, not the gold digger.

She'd give it back now, but not if they were married.

It depends on a lot of factors about the relationship: how pissed I am at the guy, how long we are married and how desperate I am for the money the ring is worth. For instance, I'd give it back if we were newly engaged/married, but after 30 years, the ring has become as much an extension of me as it was our relationship. So I don't think I would then, but it still depends on other factors.

So, what would you do? Take our poll, and let us know!