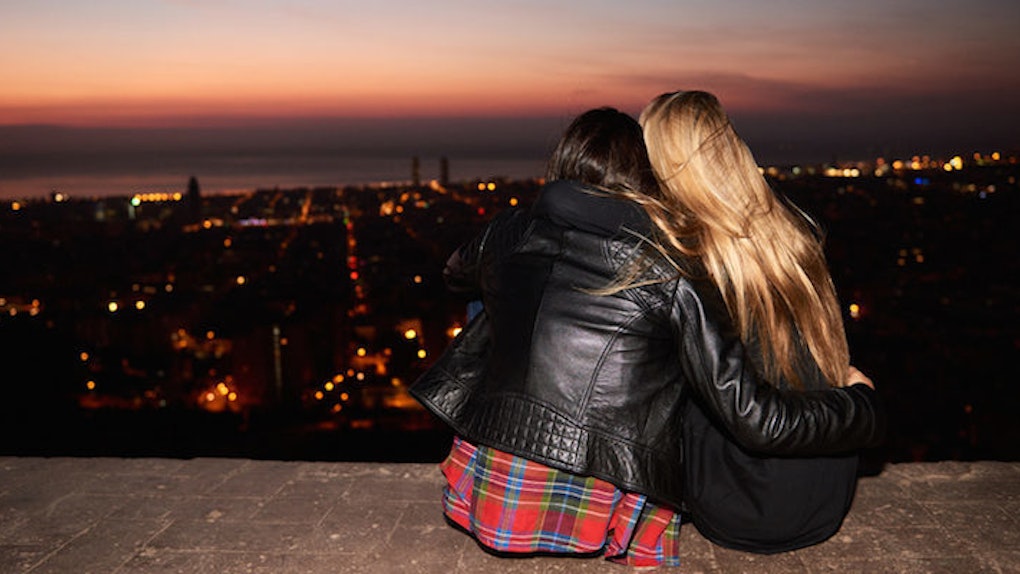 Why You And Your SO Should Both Be In Therapy

About six or so years ago, I dated a woman a decade older than me named Tia*. Tia had her shit together. I don't think I'd ever met someone who had their shit so gorgeously strung together, who wasn't, like, a parent or a gynecologist or something.

At the time, I was nothing but a 20-something hot mess, and so were all of my friends. We all drank too much booze, and when we weren't carousing around overpriced downtown bars blowing our money on shitty overpriced cocktails, we were hungover and vulnerable and wildly unstable.

Our lives were a collective rollercoaster ride of heart-swelling highs and gut-wrenching lows. My 20s in a nutshell:

We were in a state of endless meltdowns and did stupid, reckless, fruitless things, like blow a perfectly good Sunday afternoon by wasting away on the couch and smoking thousands of joints, then eating the entire contents of the fridge before beating ourselves up about HOW FAT we were for the next three days.

It was not a pretty time. We were all in bizarre hookup situations, half-dead relationships, or were having regretful drunken sex followed by morning "WHAT DID I DO LAST NIGHT?!" freak-outs.

And, of course, in typical Millennial fashion, we wanted to blame everyone in the entire world for our haphazard love lives, except, of course, ourselves.

We wanted to blame everyone in the world for our haphazard love lives, except of course, ourselves.

At the time, I lived in a raw warehouse space with four roommates in Williamsburg, before Williamsburg had a Whole Foods and a SoulCycle. Between five of us, we had one toilet and one closet. We complained about paying for heat, and then numbly handed over our overdrawn debit cards to the Soho House for $18 drinks without a second thought.

Tia, on the other hand, was different. She had left the shitstorm of her 20s behind and was in her glorious 30s. She had a highbrow job as a creative director for an Arabic fashion magazine. She had a consistent gym routine, and occasionally, even cooked at home.

We had a brief two-month courtship, but in that time, I learned a pivotal life lesson: The key to being a good partner is to be in therapy.

Tia had been going to therapy once a week for 10 straight years. Meanwhile, therapy wasn't even on my radar. I didn't even have an unlimited monthly Metro Card, let alone a therapist. (Important to note: I could've afforded both an unlimited monthly Metro Card and a therapist had I given up my habit of rooftop hotel bars in the Meatpacking District. But look, girl, my priorities were all out of whack at that time.)

I don't even think the terms "self-care" or "therapist" were in my vocabulary. It was 2009, and I was just living my life, skipping through New York City, living paycheck to paycheck and trying not to fall on my face while teetering in dumb mega heels on the cobblestone streets of lower Manhattan (you just don't wear mega heels in Meatpacking. It's not a good look, and you WILL fall. Don't try to be all tall, like the infuriatingly gazelle-like models grazing the tops of the buildings like wild, goddamn giraffes. We will never be like them, but it's OK. We do other things!).

You just don't wear mega heels in Meatpacking. It's not a good look, and you WILL fall.

Tia was a breath of fresh air. We never fought, and she was extremely self-aware, which was super new to me. One time, I told her I couldn't go to a planned dinner to meet her friends, because I really needed "alone time."

She took a deep breath, as I had canceled only hours before (because I was deep into my fuckgirl phase), looked me dead in the eye and said, "That's OK. I was looking forward to you coming, but you need to take care of yourself first."

My eyes widened. Clearly, she was being passive aggressive. But as I took in her soft, honey-colored eyes, I realized she was being totally genuine. And gem moments like this happened often.

"You know what? I'm a little irritated, but I realize it's my own issue. Don't worry about it," she calmly purred to me when I needed to leave a date early to rescue my best friend from a nightmare date.

"Wow!" I would brag to my friends, taking a meaningful puff on my cigarette. "Tia is really stable. She's an amazing person to date. She doesn't freak out unnecessarily like the last one, and she's really secure in herself."

DUH, you idiot, I could hear in the subtext of his words. Robert had been in therapy for awhile himself and had a really healthy relationship I admired with a Wall Street investment banker who was also in therapy. But I was too stupid to connect the dots.

Weeks went by and we broke up because I was a totally vain bitch who was easily distracted and fickle as hell. But I always look back at that sort-of relationship fondly. Tia had really been the most stable, even-keeled person I had ever been with without being even remotely boring.

She was a creative, so she was super interesting and had a wonderful wild side, but she didn't take her creative demons out on me. All the other artistic people I had dated flung all of their issues right onto me. I thought it just went with the the territory. But Tia had somehow pulled off being both exciting and stable. I thought she was a unicorn.

Until I started going to therapy.

Look, kittens, I will never, ever, ever lie to you. Therapy is a painful process. It forces you to look in the mirror, sober, and really gaze into your reflection without a filter. You have to revisit all the dark parts of the past, look at your behavioral patterns, and really confront the shit that's holding you back from having good relationships and achieving your life goals.

However, it's incredible. The self-awareness you gain is exactly what allows you to break these patterns that are ruining your life without you even realizing it.

After a few years of therapy, I started dating someone who was also in therapy. And a couple months into this really exciting but really healthy relationship, it hit me like a fist: We had never even had a fight.

We had a disagreement or two, but we talked it out before it escalated into a screaming, plate-throwing, lesbian-gone-wild fight. (I know straight people fight too, but damn, two complicated, bright girls in the throes of passion can result in a dangerous hurricane like nothing you've ever seen before.)

But here we were: Two therapied girl creatures who knew the difference between our own drama and the relationship's drama.

Let me explain: Before I started therapy, I used to get really, inexplicably sensitive if my partner shut down and got quiet for awhile. When I went to therapy, I learned WHY I would get so freaked out (it stemmed from a sensitive teen issue), and now, I just let my girlfriend be because I learned it's NOT about me!

Therapy really teaches you how little is about you (or the other person, for that matter), and how much of our explosive behavior is about our past. And because we're made aware of this, we don't let all those issues bleed into our relationships and destroy them.

So, I fully believe that the best way to have a healthy relationship is for both partners to actively be in therapy. Because, if you want a healthy relationship, you're not going to have one until you're really healthy within yourself, babe. There are no shortcuts (girl, I've tried all of them), and you can only fake healthy for so long until all of your dark shit surfaces. It's OK to have dark shit, but it's not OK to throw that baggage onto your innocent partner.

It's OK to have dark shit, but it's not OK to throw that baggage onto your partner.

My suggestion is to get into therapy NOW, kitten. Not only will it make you so much happier and self-aware, it will also make you a better partner. And if the two of you are happier and more self-aware, your relationship will actually be healthier.

Plus, therapy is not as expensive as you think! There are therapists that take insurance and there are cheap internet-based counseling programs, so just stop being lazy and do your research. And maybe only spend $19 on cocktails one night a week instead of four. Suddenly, you'll find the money.

In short: if you covet a healthy relationship, you must be a healthy individual. But even if you don't really care about getting "healthy" for your girlfriend or boyfriend, it's worth going to therapy to solidify the only relationship you'll be in for life: the relationship with yourself.

As much as I like to believe that love is forever, life can throw you some pretty screwy curveballs: People cheat, people can leave you at anytime, people can die unexpectedly, people fall out of love. But no one, no one, can ever take you away from you. You're in this dynamic for life, no matter what kind of shit goes down.