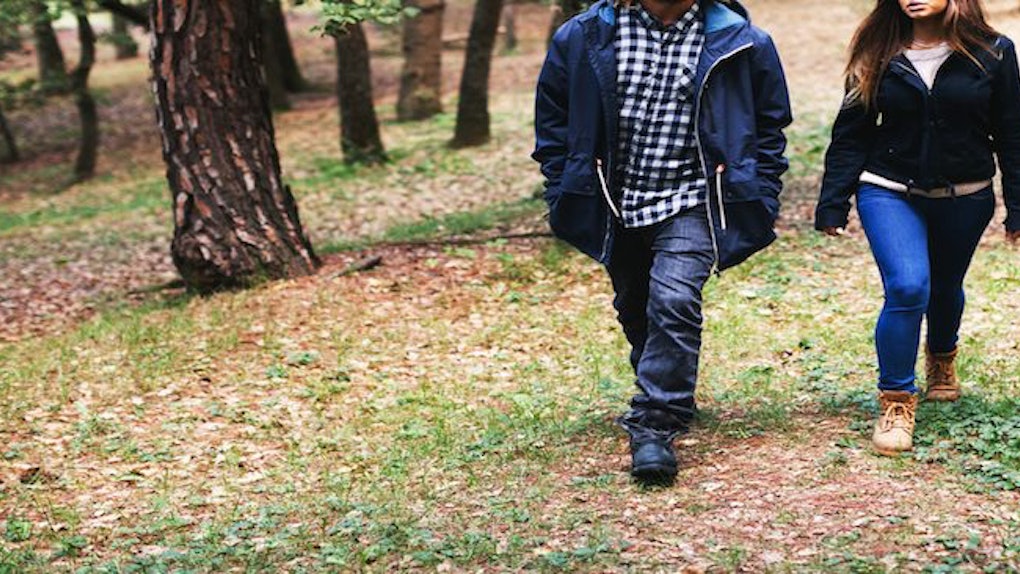 Does He Like You, But Doesn't Want A Relationship? Here's How To Handle It

Figuring out if the person you're into does in fact like you back can sometimes leave you feeling like you're in a scene straight out of Sherlock Holmes. What did they mean by that? Were they making a strange face when I said this? But how do you handle a crush who confesses that they do in fact like you? Particularly when it's followed by the caveat of all caveats — that he likes you, but doesn't want a relationship?

This begs the question: Are you chasing someone who is emotionally unavailable, and is this something that can change with time? Well, the short answer is: It depends.

First off, it's important to take some advice from mom on this one and examine if their actions and behaviors are matching up with what they're saying. It's become all too easy for people to drop the "I like you, but..." line as a way of breadcrumbing. Ultimately, you want to make sure they aren't just telling you what you want to hear to keep things going until they find someone they are actually interested in pursuing. Before deciding if they are worth waiting for, ask yourself a few questions.

Does this person treat you like a friend? If they do genuinely like you but just aren't ready to jump into something new, then there should be some basis of friendship. Do they check in on you? This is an important one! Think about the last time you made a new friend you liked. You would look forward to seeing them, and you would send them texts to see what they were up to or how their weekend went. Do they support you? Although you can't expect them to show up like a partner would, if their interest in you is genuine, then they should be asking about things they know matter to you. (i.e., Did you end up getting the promotion? How did your show go?) Are they transparent about why they aren't looking for a relationship? If it's hard to get them to articulate exactly why they aren't ready or looking for a relationship, then it may be that they are trying to avoid being completely honest.

If the answer to most of those questions is yes, then there just might be some hope. Now that you've established this person is not a scrub, here are a few things you can do to help things move in a more serious direction.

Be A Good Listener

Let's face it, it's a tough world out there, and a lot of people have been burned in the past. If you can present a safe, non-judgmental space for your crush to open up about possible commitment issues or past relationship failures, then you'll already be on your way into their heart. Don't force it, but you can gently nudge with caution.

If they bring up an ex, for example, instead of changing the subject, ask questions. Try to avoid making value judgments about what their ex may have done right or wrong, but rather put the emphasis on how their ex's actions made them feel.

If the person you're interested in tells you they don't want a relationship, then the last thing you should do is try to convince them that they are wrong or apply unnecessary pressure — which very well may send them running in the opposite direction. The best way to get the love juices flowing is to show them, by giving them a sneak-peak into what it would be like to date you without giving away the whole enchilada. Make the most of your time together. Treat it as if you were dating without making yourself quite as available as you would with someone whom with you were exclusive.

There is no magic length of time for how long you should wait before throwing in the towel, but I think any more than a couple months is too long unless you are actively dating other people in the meantime.

...But Don't Be Too Patient

My girl Rachel Lindsay, the star of The Bachelorette Season 13, couldn't have handled the wishy-washiness of of runner-up Peter Kraus any better. Although it seemed for a time that she may have been more into Peter than the subsequent winner Bryan Abasolo, Rachel knew what she wanted: a fiancé, not a boyfriend. Ultimately, she had to let the idea of her and Peter go because they weren't looking for the same things.

If you are ready for a relationship and the person you're interested in isn't, then it's important to realize that you shouldn't have to convince someone that you are worth a commitment. If you've given them space while also presenting opportunities for a deeper connection to develop and they're still running cold, then this is a red flag.

Sometimes, the best course of action is to try and move on. After all, seeing you go after what you want might be just the push they need to realize that if they like you, then they need to make a definitive decision about how they feel.

This article was originally published on Sep. 11, 2017