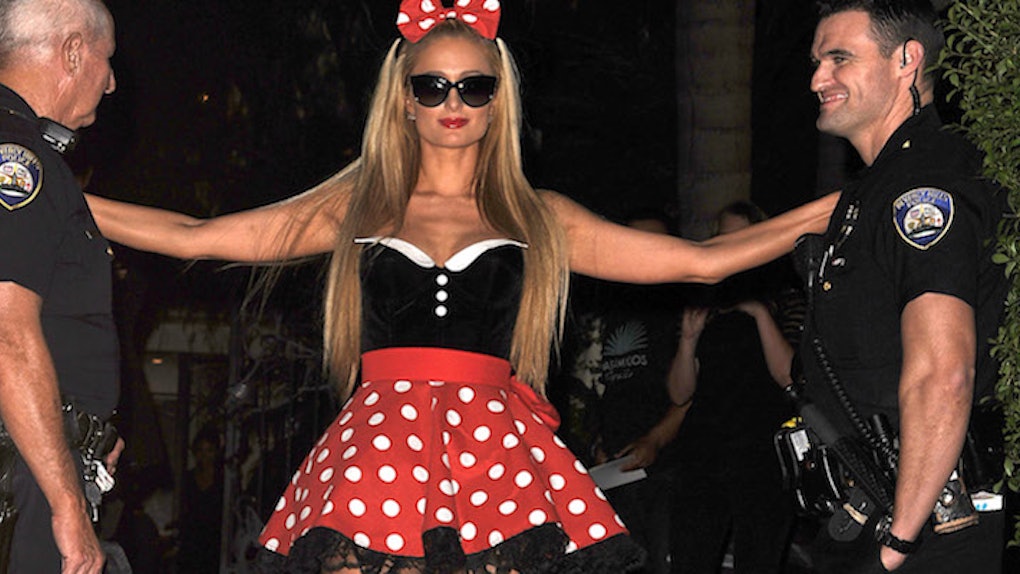 If Your SO Won't Let You Dress Sexy For Halloween, Dump Them Right Now

"Why do you have to wear something sooo revealing for Halloween, Zara? I mean you're SUCH a pretty girl. You don't need to get that kind of attention anymore, you know?" an ex girlfriend once said to me.

In fact, I felt so good in that costume it might make an appearance again this year.

If your significant other won't let you be sexy for Halloween and forces you into one of those nasty-looking, frumpy couples costumes, it's a massive, shining, bright red flag, ladies. I don't care if you're dating a man, woman or anyone in-between.

If you're feeling sexual this October, and you want to throw on a plaid, super short kilt, thigh-high knee socks and patent leather Mary Janes, good for you!

So many women in our culture are ashamed of their bodies. So many women go to great lengths to cover themselves up because they keel over in horror when they catch their own reflection in the bathroom mirror. So many women, right this minute, are filled with so much devastatingly SAD hatred for their own bodies that they've disconnected from their sexuality entirely.

I know this because I used to be (and sometimes still am) one of these girls, and it's really a horrible way to live.

So what if your date doesn't want you to be sexy? They say you're better than that? They ask WHY you need to get attention from anyone besides them — isn't theirs ENOUGH? They say they don't want random dudes looking at you ~that way~?

Well, honey child, you're dating someone who is missing the whole point. If they're threatened by the weight of your woman-ness, they don't deserve to have such a fierce woman as their girlfriend.

If they're threatened by the weight of your woman-ness, they don't deserve to have such a fierce woman.

If they don't want you to get any attention (as an ex of mine used to shame me for wanting incessantly), they're wildly insecure. And probably with good reason.

In my 30 colorful years out-and-about on the dating scene, I've learned that anyone who doesn't want you to sparkle for anyone EXCEPT THEM is afraid of what will happen if you (God forbid) hear compliments.

They're afraid that if too many people tell you how hard you're rocking your cool, sexy Halloween costume, you'll finally realize how awesome you actually are. And you will realize how un-awesome they actually are, and you'll dump them.

If your partner is actually awesome, they will be all about you hearing compliments. They want your self-esteem to sky rocket, because all girls deserve the opportunity to have skyrocketed self-esteem.

And if they shame you for enjoying attention, that's just them manipulating you, baby.

Trust your big lesbian sister, Zara. I've been there.

And I've learned that there is nothing wrong with wanting attention — with feeling good about yourself and wanting people besides your partner to notice your fierceness.

It doesn't mean you're trying to cheat on them, or flirt with other people. It means you're a whole person, who's not just dressing for the enjoyment of your partner, but for everyone! And that's great.

The moment all of your actions are totally for ONE person, is the moment you lose yourself entirely.

In fact, this is a really powerful, strong way to gauge a new relationship. If you're digging wearing something sexy this year and your partner won't "let you," it's time to end the relationship, kittens.

First of all, you're not their doe-eyed student. You're a woman, and you decide what to do with your body. This isn't the Republican convention — it's your partnership.

I always say "Keep your laws off my body, and keep your fashion rules off my body, too." Because your body is your own and you can dress it however the fuck you want to dress it.

It's really bold to want to show off your body in a society that has such impossible standards for beauty. In a society that is designed to make us feel like shit about the way we look. Having the courage to stand strong in the face of this body-shaming culture makes you burn really bright.

And having someone tell you that's wrong, dulls out the bright. And you're too fucking amazing to be dulled down by a fuckboy (or fuckgirl).

So if your SO won't let you dress sexy this Halloween, dump them, girl. Dump them, and let that light of yours burn, burn, burn, like Jack Kerouac says:

... burn, burn, burn like fabulous yellow roman candles exploding like spiders across the stars and in the middle you see the blue centerlight pop and everybody goes "Awww!"