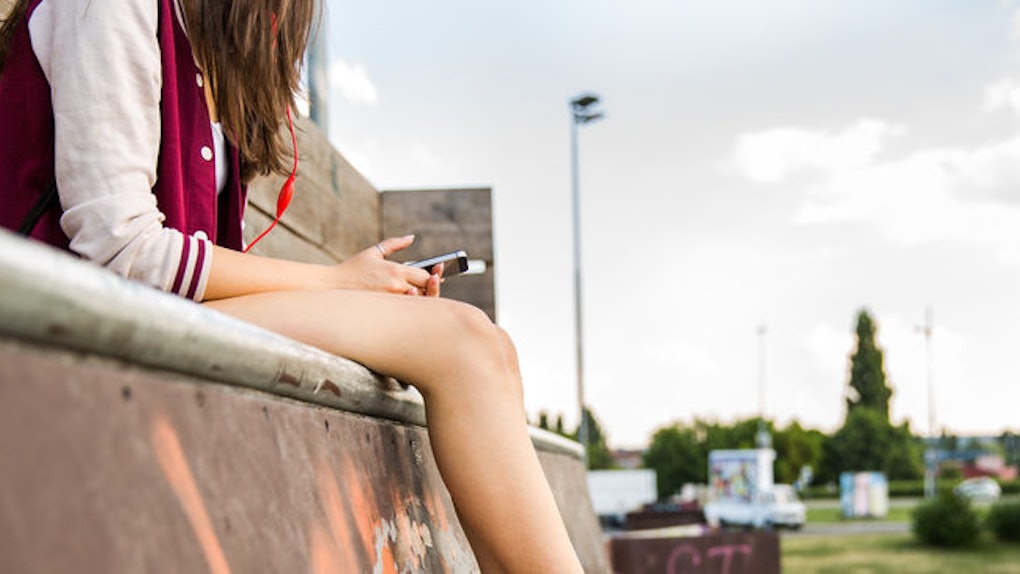 If A Guy Who Ghosted Texts You Again, Here’s How To Handle It

Ghosting is the worst. Whether you’re the person getting ghosted or the person who's actually doing the ghosting, ending a relationship by abruptly cutting off all communication is never a good thing. But what if that relationship doesn’t really end when they leave your last message on read? In some situations, you may find that someone who ghosted you texts you again and wants to try to come back into your life.

If you find yourself in this situation, your initial reaction to seeing that gray text bubble might be to just ignore the message and move on with your life. If that’s how you feel, that’s completely fine to do — you shouldn’t feel like you owe that person anything. But it’s not always that easy. If you get a surprise text from someone who ghosted you and you’re still interested in exploring a potential relationship with them, it's OK to give the text consideration. That is, if you think it deserves it. Being ghosted may feel awful, but it's completely up to you whether to give someone who ghosted you another chance.

So, here’s how to best handle it when someone who ghosted you shows up again in your texts.

1. Take Time To Read The Message

Before you do anything, read the message carefully. Then, read it again. Marriage therapist Nicole Richardson says she’s seen people who don't even read the text from someone who ghosted them and get the wrong idea. This means they "read more into it than is actually there," says Richardson. The person who ghosted you may just be bored or need something from you, and you might misinterpret that and be back to planning your wedding.

Stef Safran, a Chicago-based matchmaker, agrees and says it's important to really take your time assessing that first communication. "See how they start communicating with you," Safran says. "If it's just a quick text to say 'Hi,' allow them to make more of an effort."

When you receive a text from someone who previously ghosted you, give it all the time you need to make sure you’re reading it correctly and that they’re making an appropriate amount of effort. They’ve ghosted you once already, so they aren't starting with a baseline level of your trust — they need to earn it.

2. Think About How You Feel

Once you've had a moment to digest the initial text, the next thing to do is to take a minute (or several) to figure out how you really feel. If the text contains an apology, that's great, says Richards. But it's not likely, and you might feel that a casual text saying "Hey" isn’t enough reason to give them another shot.

Safran says to think about it like a friendship: If a friend ghosted you and then reappeared out of thin air, you’d expect something bigger than just a “Hi” or “Hello.” So you should use the time between getting the text and responding to weigh out your own feelings. "Maybe this wasn't someone you were that into, so it's not a big deal," Safran says. "If this is someone you don't mind hanging out [with] here or there, then maybe you won't be that upset if [they] disappear again."

3. Make Sure They Acknowledge Their Actions

If you've decided to communicate with the person who ghosted you, you should also hold them accountable for their behavior. "Ask why [they] ghosted you," says Anita A. Chlipala, licensed marriage and family therapist and author of First Comes Us: The Busy Couple's Guide to Lasting Love. "There's a high probability [they’re] going to do it again unless [they] can demonstrate change." According to Chlipala, if they claim they ghosted you to save your feelings, then they need to understand that ghosting might have been really painful for you. Now that they’re back in your life, they need to be clear about communicating better in the future.

April Masini, a New York-based relationship expert, also says that figuring out why they ghosted is important — it may not always be the worst-case scenario. "If [someone] ghosts you because this is [their] normal behavior, move on. It’s cowardly and rude. But... if [they] ghosted you because there was a miscommunication and [they] did contact you but the email or text didn't go through, or it's in your spam folder, give [them] another chance."

"The reason for the behavior is often just as important as the behavior itself, so if [they] come back and you're still interested, get a little intel," she continues. Either way, if they did actually ghost you, make sure they understand how it made you feel.

4. Consider If It's Worth The Risk Of Being Ghosted Again

Even if you’re back to texting (or maybe you’ve graduated to hanging out again), there are still some big questions hanging over a potential relationship with this person, like: Will they ghost you again? Is starting something up again worth the risk?

Chlipala says it's probably not. "Ask yourself if you really want someone in your life who chooses to ghost rather than clearly communicate about what's going on. It won't get any better just because you're dating or in a relationship. If you've been ghosted, the person did you a favor by getting out of your life, so don't let [them] back in,” she says.

If the person is someone you know wasn't going to be great for you long-term, it may not be a good idea to waste any more time on a relationship with them.

5. Tread Carefully If You Decide To Move Forward

If you decide you want to try a new relationship with this person again, be very, very careful with how you move forward. Chlipala says, "Set your expectations really, really low. Don't get your hopes up that [they’re] into you or want to date you. [They] could be bored, know you're available, and just want to have some temporary fun." And if you do give it a go, Chlipala says, don't stop dating other people. It'll help you maintain some distance, so long as you’re both on the same page about not exclusively dating each other.

Richardson says it's not a bad idea to keep your guard up. "Be aware that [they’re] still likely to let you down. [They’ve] shown you already that [they’re] capable of leaving you hanging, so do not assume [they’re] sorry and/or that [they] will not do it again."

Even if everything seems to be going well, Masini says to hold back just a bit. "Don't spill your heart, sleep with [them] again, or bring [them] to your sister's wedding ... You want to behave according to what you know, and if this is someone who's hurt your feelings in the past, be smart this time around."

This article was originally published on July 10, 2017