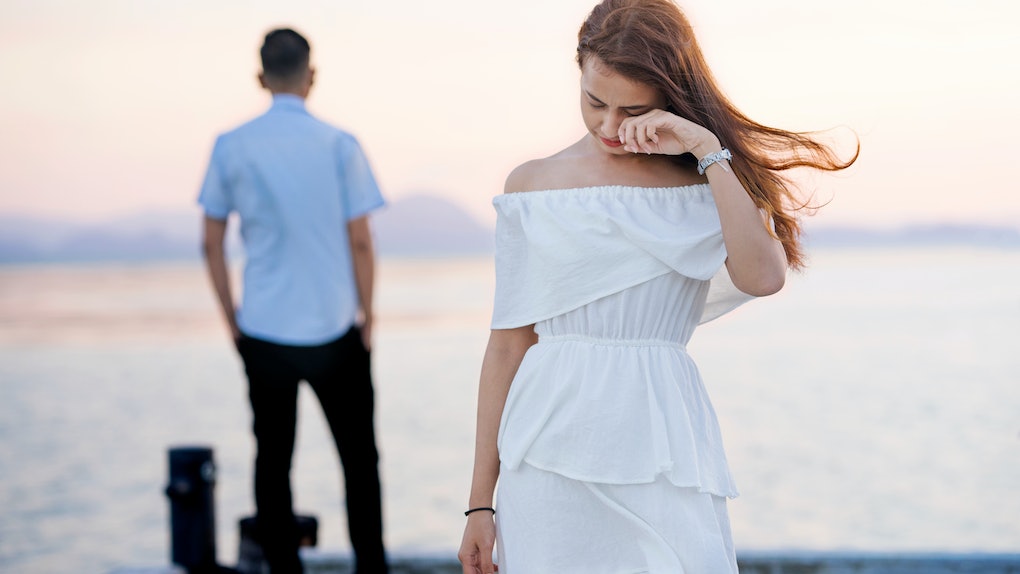 How To Break Up With Someone You're Still In Love With, Because Sometimes, It Just Doesn't Work

My last breakup was with someone whom I still cared about, and it sucked. I loved my boyfriend very much, but the relationship started to feel stagnant, and it was time to move on. We were moving forward, but not as a couple. We were growing in separate directions that had caused us to feel more like friends than lovers. It's hard to know how to break up with someone when you still love and care about them very much. The moment never exactly feels right, because you don't want to hurt someone you care about, and you don't want to stop hanging out with each other either.

When my ex and I broke up, he came over, and we had a long discussion about how we weren't compatible for one another at this point in our lives. He was struggling in his career and felt the need to concentrate on it in order to feel happy and stable in his life and, thus, couldn't give his full attention to me. I cared about his happiness and couldn't continue to feel neglected in a relationship. We broke up, cried a little, watched a movie, and then, he slept over (bad decision). Yes, we hooked up. Then, the next morning, I left for work, and I never saw him again.

When I got home that night, he had left love notes all over my apartment, telling me he would miss me and how much he cared about me. He also stuck a note on the fridge saying, "Remember when you cooked that horrible dinner," and one on the toilet that said, "Remember how embarrassed you were when you clogged this on our third date," which made me smile... but also miss him. It's easy to break up with someone you hate or to move on from a relationship that's broken. That's why they're called breakups after all, right? But breaking up with someone you still care about is hard. You don't want to do it, even though it's the right decision.

Elite Daily spoke to two experts about how to break up with someone you're still in love with, even when it hurts. Because you deserve to have it be as painless as possible.

So many of my relationships have ended over text or on the phone, and I think that's why it took so long to get over them. The book felt unfinished. I never got closure, and things felt unresolved with those partners. I wanted to ask my exes questions or see their expression when things were ending, but all I was left with was the crying emoji instead. Every time I've ever broken up with someone over the phone, text, or email, the subsequent months are filled with plans to finally meet up in person and discuss what happened. But if you do it in person the very first time, you can have a clean break from the very beginning.

"The most important thing you can do for them to show compassion is to explain why," Dr. Joshua Klapow, clinical psychologist and host of The Kurre and Klapow Show, previously told Elite Daily. "If you can answer the question for yourself then you should offer that to them." If you and your partner are still in love but it's time for your relationship to end for other reasons, then you at least want to give your significant other the respect of breaking up in person. It will help to give both of you closure and allow for an honest and thorough conversation that can help both of you move on.

If you're still in love with the person you're breaking up with, then you might be unsure about your actions. Should we really end things, or can we work this out? Maybe we're just having a bad day, week, or month. Can we get over this? Is moving on a mistake? But if you've thought about this thoroughly and you're sure the relationship is not right for you, then be strong and resolute in your decision, and don't get swayed into staying together.

"Ask yourself this: 'Why do I not want this and what would make things different?'" Dr. Klapow said. "Ask yourself: 'Have I had the conversations clearly and specifically about what is not working and what is working?' If you love the person, then you need to be very sure that you are very clear about why you don’t think it is going to work." Be firm that things are ending, and, no matter how tempted you are, do not hook up after you break up. It'll only end up leading both of you on and keep you wondering if you're making the right decision. Overall, it's just a bad idea.

After a breakup, it's important to set boundaries and clarify breakup behaviors. It'll make the transition to friends (or strangers) easier, and boundaries can help you from getting hurt even more after a breakup. I remember after I broke up with one of my exes, I was really hurt when I found out he had hooked up with someone else. The reason I felt hurt was because he and I were still talking every day, and it felt like we were still very much together, even though we weren't.

"There is not an easy way to break up with someone you love," Dr. Klapow said. "Recognize that there is a decent chance you are going to hurt feelings." Establishing boundaries between you and your ex can save you a lot of heartache and help to clarify the role you play in each other's lives. Are you going to stay friends on social media? Are you still going to talk, and if so, how often? Are you going to see one another in real life? What's the rule about hooking up with each other? Are there certain things you don't want to talk about with one another?

If you're still in love with your significant other, that's not going to end right when you break up with them. You're still going to miss them. You'll want to call, text, and talk with the same frequency as you always do. You'll still want to hang out. In my last relationship, after we broke up, I remember how badly I missed my boyfriend on the couch every night, sitting next to me, watching our favorite shows. I knew we weren't right together, but couldn't we still hang?

The answer is no, not so soon. Right after a breakup, you need to take some much-needed space to heal and actually get over one another. You can't go from lovers to friends immediately just because you've said the words "we're done."

"It’s useful to initiate the breakup conversation at a time when you all have space during/afterward to respond to your subsequent feelings and reactions," James Guay, a therapist who specializes in high-conflict couples, previously told Elite Daily. "In other words, don’t start the conversation right before you each have to go to work or to an important event."

You need time to actually get over one another, or you might just end up back together again — or back in bed at least. And if you prolong the breakup, you're only prolonging the time it takes for you to finally start moving on and feeling better.

Breaking up is hard to do, especially when you're doing it with someone you still care about. But if it's the right decision for you, then you have to make it. Be firm and direct, and make sure you establish proper boundaries after you've decided to part ways.

This article was originally published on Sep. 26, 2017