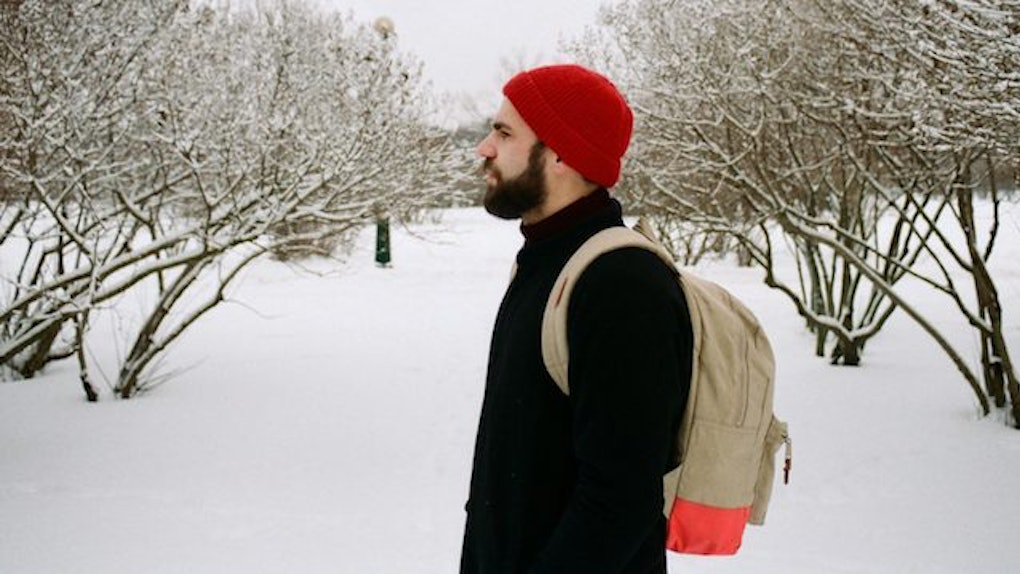 Guys Don't Care About Finding Someone For Cuffing Season

Recently, a friend and I chatted about his new relationship, and he described how he met the girl, how long they dated, what she looks like and how much he really enjoys being with her.

I asked him if he thought this girl might be the one. And if he wasn't exactly sure if she was the one, was she exhibiting signs of one-ness?

He told me, “Yeah, I really like her. I think we have a great thing going. It's just... I worry this may be a 'cuffing season' sort of thing.”

Of course, I'd never heard of cuffing season. Hell, I'm a guy who goes to the movies alone on weekday afternoons. It makes sense I'd be confused by the concept of a season where people hop into relationships just to avoid being alone.

My response to him was simple: "That is total and complete bullshit."

I've done some research into exactly what cuffing season is (I didn't want to just take my one friend's word), and I stand by my original theory of calling this BS.y

Cuffing season is ridiculous in a number of ways, but here are my top three reasons why it's completely idiotic.

1. Winter is a momentum killer.

Early dating is all about momentum.

Well, it's also about chemistry, attraction, him being taller than you and her laughing at your stupid jokes. But the key factor to keeping a relationship going in the early stages is momentum.

One of the explanations I've read about cuffing season centers around the idea that it's a time when people are more likely to jump in relationships because their social calendars aren't as filled.

But to me, that couldn't further from the truth.

First off, we all have those ridiculous work holiday parties to attend. Second, there's at least three sets of your friends who think they're the only ones hosting an "ugly sweater" party. Third, and most importantly, there's the actual holidays themselves you have to celebrate.

I don't know about you, but knowing my family, there is absolutely no fucking way I'm bringing around a cuffing-season girlfriend I've known for no more than a month. A girlfriend of mine would need to be properly debriefed on the insanity that would come her way in those scenarios. It's heavy.

Additionally, let's also not forget when people tend to go on vacations. At least in the North East, where I live, people typically flee to warmer climates when the weather here is horrific.

This is all to say: If you're being honest with yourself, and you're not an orphan or person with no social circle WHATSOEVER, your normal schedule is in complete disarray for a lot of cuffing season.

It's a lot. And it's all a killer to early-dating momentum.

2. Winter weather makes me never want to leave my apartment.

… Not trek all the way up to her über-hot, landlord-controls-the-thermostat studio apartment on the Upper East side.

What is all this nonsense people are spewing about how all they want do is cuddle with their significant other when it's cold? Sure, don't we all? But come on, don't make it like you're making that trip for some guy or gal you met a week ago when it's 7 degrees out and snowing like crazy.

I've found it's hard enough to get a girl to come to Hoboken in good weather. The idea of a woman voyaging across (at least) one body of water to get to me in horrific weather when the only thing I can promise is a couch and "Black Mirror" is dubious at best.

Everything I've read about cuffing season makes it seem as if women are just dying for that fuckboy to change his ways, sweep them off their feet and do couple-y shit for a few months in the winter.

Beyond the obviously troubling depiction of women that description paints, it's completely insane to think women (and men) don't want relationships during the rest of the year.

Have you ever been to a summer barbecue where it's only single men? Or only single women? Do you avoid watching TV when the weather turns? If you do, you've almost assuredly missed any number of great HBO shows, so I suggest you get inside this spring and summer and catch up.

Couldn't you make the same argument for summer activities needing a significant other (beach trips, vacations, holiday weekends) as you do for winter activities?

To say cuffing season is a thing trivializes and marginalizes all the people who, you know, want to actually date people regardless of temperature or season.

So, go ahead, say you're in a cuffing-season relationship, if you must.

But the truth, friends, is this: either you're in a real relationship and you don't want to admit it, or you shouldn't be dating the person anyway.