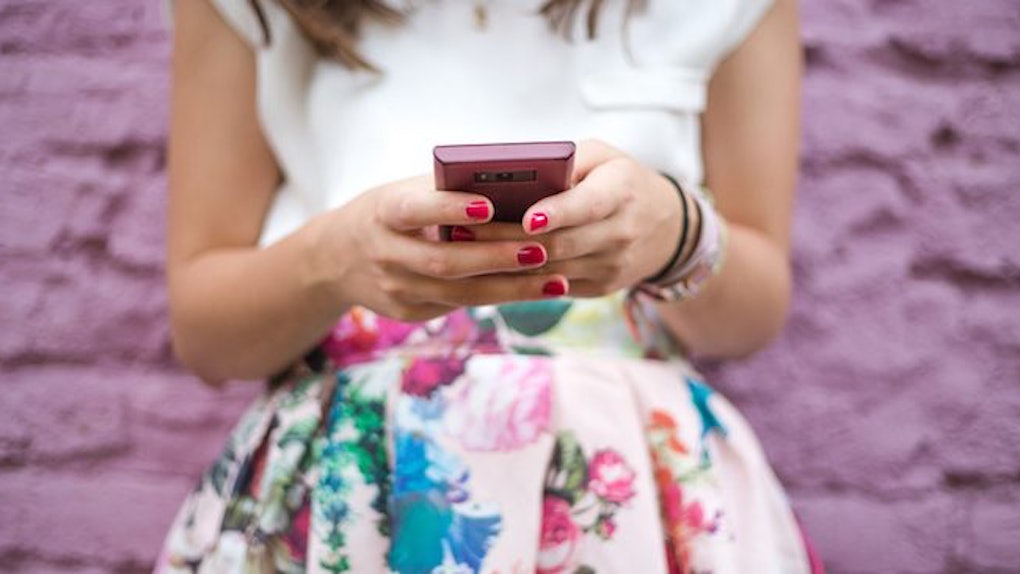 What Ghosting Is When You’re In College Vs. Your 20s

When I was in college, ghosting wasn't a term yet. If you met someone at a party, and they disappeared after you hooked up, that was just called good, ol' fashioned rejection.

Even though the term didn't exist in college, there were definitely a couple of times when a guy ignored me after we did something vaguely romantic or sexual. I'm pretty sure a guy I met at a birthday party ghosted me after we slept together. Another guy with whom I was good friends and had a nearly three-year-long flirtation definitely ghosted me after we finally hooked up senior year. (That one stung.)

Now that I'm in my 20s, ghosting is absolutely a term that's not going away anytime soon. Whether you've ghosted someone, been ghosted yourself, or been zombied (aka when someone rises from the dead after ghosting you), we have all experienced ghosting to some degree.

Even though ghosting is universal, it's definitely a different experience in college and in your 20s.

You will most likely see your ghoster/the person you ghosted again in college, but you most likely won't in your 20s.

On average, cities or towns where we spend the first few years of adulthood are larger than college campuses. No matter what size your school is, the likelihood that you'll run into someone you know on a college campus is just greater than it is if you're an adult living among the public. It's just numbers here.

The guys who ghosted me in my 20s might as well be dead. Unless I straight up lurk in their neighborhoods or the bars they frequent, I will never, ever see them ever again. (Except for the guy who told me he wanted to meet up in person to talk about him ghosting me.)

However, I saw the guys who ghosted me in college pretty frequently. I had a lot of mutual friends with the guy I met at the birthday party, and I saw my ex-friend during a senior week event, when all the graduates stay up all night on the rooftop and watch the sunrise together. So if you're a victim of ghosting in college, rest assured that person will resurface. (But don't even think about trying to get them back. You're better than that.)

My friend Jamie*, 24, was ghosted in college by a flakey guy who kept texting her and then disappearing. "I told him to either make a solid plan with me or f*ck off... and he f*cked off. He never responded to that last text," she says. Even though she went to a relatively large school, she saw him in a bar later that year and waved at him "obnoxiously," she says. "He glared at me."

My co-worker Candice, 24, went to a relatively small college and was ghosted by a guy whom she "could not have been more into." Then, she ended up seeing him again in the most awkward of situations: "I was blacked out, so I don't remember this. But he showed up to a party at my best friend's house, and I guess I flipped him off from across the room, and everyone at the party was being rude to him. He literally got iced out because of me."

The sad reality is, if you're going to ghost someone in college, you're going to run into either them or their friends, classmates, and roommates. And they will troll you and get you kicked out of parties.

One could argue that if ghosting's true definition is someone cutting off all communication and disappearing completely, then can you ever really experience ghosting in college?

Well, yes, you can, says Dr. LeslieBeth Wish, Ed.D, noted licensed psychotherapist, author of Smart Relationships, and Founder of www.lovevictory.com. "If the other person ended abruptly and without explanation your intimate relationship, or even one that was deepening, then you most likely were ghosted," she says.

And just because you see your ghoster across the quad and exchange an uncomfortable "hey," or run into him at a party where he pours you a beer, doesn't mean he didn't ghost you. "That person's brief nod of the head or a quick — and, let's face it, somewhat meaningless — conversation do not necessarily mean that you have not been ghosted," says Dr. Wish.

In college, ghosting means never talking about the relationship — or the hookup, the date, the whatever — ever again after it happens.

Personally, I believe there's an exception if you were friends with someone before the intimate relationship began. If you don't talk about what happened but you are still friends after the relationship ends, I wouldn't consider that being ghosted. (I would, however, consider that person a terrible friend.)

Still, unless there is some kind of closure to the intimate relationship, there's always going to be "a layer of ghosting hurt," says April Masini, a New York based relationship and etiquette expert and author. "Even if you have lunch together, see friends together or sit next to each other in a class, there's always that questions of, 'Why did you disappear after we had six dates?' or, 'Why didn't you call after we slept together on the third date?' Just seeing someone doesn't make that feeling go away," she says.

In your 20s, ghosting is far more simple: If you're ghosted, you will literally never talk to that person again. No need to worry too much about what to do if you run into your ghoster again because you (most likely) won't.

They might, however, creep on your social media every so often, which is a whole separate thing.

While ghosting in college and in your 20s are both undoubtedly hurtful, there's a difference in the way the act is perceived and the effects it can have on you.

Masini says ghosting in college is "a little more forgivable," due to college students' general immaturity. "For many people, they are dating for the first time, and they don't have the social skills or the maturity and experience to understand that their behaviors are hurtful. Sometimes college students, new to dating, are so overwhelmed by the dating process that ghosting is the best they can do," she says.

It's not a great excuse, but when I think back to how sh*tty I was at 18, it's an explanation I think we can all agree with.

When you reach your 20s, however, ghosting is far less forgivable. Our brains are much more developed, and it's not unreasonable to expect that someone would be mature enough to break up with you like a real adult. "By the time you are in your mid-twenties, your brain has just about reached full development — and, hopefully, your brain includes empathy and kindness," says Dr. Wish. "So, ghosting someone when you are biologically capable of handling relationships more responsibly is rude, crude, and insensitive."

Masini says there's an additional layer of hurt because of how much more you invest in someone you're dating in your 20s: "People in their 20s ... are looking to partner and share their lives, so that when someone ghosts them after this investment of energy, heart and soul, money and time, the hurt is more potent than it is with college dating."

Even worse, being ghosted in your 20s can actually affect the way you approach dating later. "The hurt from the lack of closure and insensitivity can both linger and impair your ability to trust in love," Dr. Wish says.

Either way you slice it, being ghosted, whether in college or in your 20s, is the worst. And if you ghost someone, you are also the worst. But we've all done it, and the best thing we can do is not beat ourselves up over it. And maybe, if you're feeling particularly guilty about ghosting someone, try to apologize. "Genuine apologies — even years later — can be very good emotional medicine," Dr. Wish says.