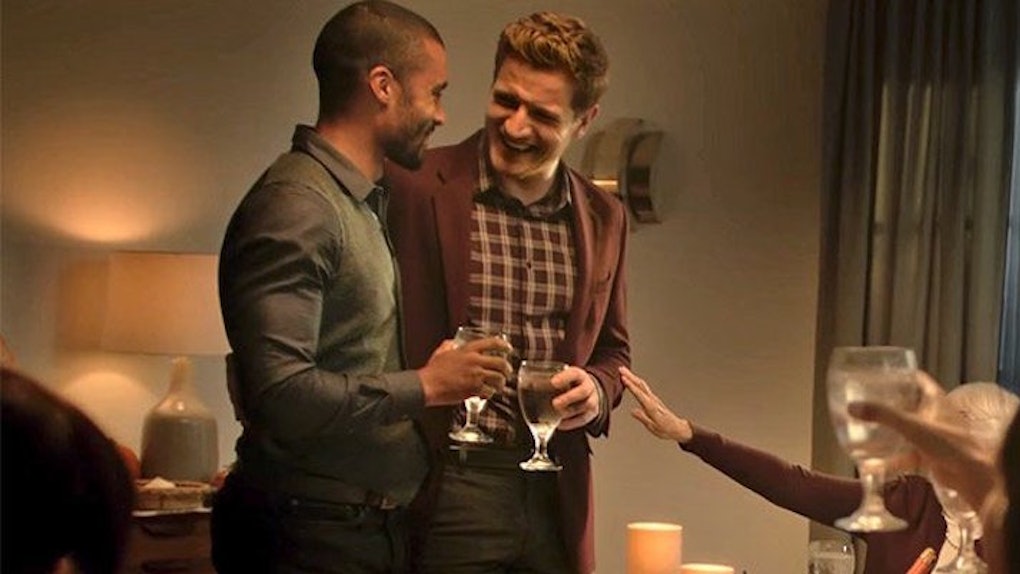 How To Handle Thanksgiving With Your Family After Coming Out

Coming out to my family wasn't exactly easy.

Before I told my mom — who in turn, told my dad and two older siblings — I paced around my old bedroom in my parent's house for what felt like hours.

It was spring, and I had been taking monthly trips upstate to SUNY Oneonta, my college alum, to see a younger friend-turned-hookup. I felt things getting real.

To say I was in love would be an overreach, but he was definitely the first guy I had genuine feelings for and cared about... which scared the shit out of me.

I was disgustingly happy during the 2-day increments where we'd hole up in his geeked-out single dorm, and I wanted people to know it.

I wanted my family to know it.

The process of coming out is like throwing up when you're painfully hungover: No one likes to do it, but you know if you decide to pull the trigger, you'll feel a million times better in the long run.

Coming out is like throwing up when you're hungover: You don't like it, but you know you'll feel better.

The oversized lump in my throat — paired with the undeniable feeling of nausea — made me question the decision I was about to make.

But I finally opened my bedroom door, walked into the living room, and took the plunge over the rainbow.

"Hey Mom," I blurted out, kind of yelling accidentally. "I'm going back up to Oneonta next week, and... it's to see a guy."

She looked up from off the couch with no real expression of shock or surprise, but instead, with one as if she'd been waiting for me to say what I just said.

"Umm.. yeah, I am. I'm gay," I responded, a little hesitant at first, but ultimately, proud to finally be able to fucking say it out loud.

And that's the thing: Once I made that decision and told my parents their son was gay, everything was OK. It was as simple as that.

While it's not the case for everyone, my parents reacted essentially how I had expected. They loved me, they supported me and frankly, they knew the entire goddamn time.

Though I spent time with my immediate family after this and became comfortable with their thoughts and questions about the LGBTQ+ community, I never had to address it with my other relatives.

That is, until Thanksgiving.

I immediately regretted the bulky, old man sweater I had thrown on for the occasion. I was anxious, sweaty and allowing my thoughts to get the best of me.

I was pretty sure no one else was gay in my family (at least that I knew of), and in my head, I was afraid of being labeled as the family's outcast.

Though my mom reassured me no one cared that I was gay (thanks, Ma), I flirted with the idea that I'd get to my brother's homey New Jersey condo and be shunned by a cousin or closed off by my favorite uncle — for no reason whatsoever.

They all knew already. They had reached out to me months prior and expressed their love, but I still couldn't shake that feeling that I'd be looked at differently.

Me at Thanksgiving: 'Yes everyone, I like penis. Now, can we eat?'

"Yes everyone, I like penis. Now, can we eat?" I considered blurting out to remove any of the tension I perceived to exist.

But luckily, it never came to that. There was no tension, no issues, and no problems to be had.

I feel very fortunate that I didn't lack support during the year I came out. But there's no denying that the general concept of revealing one's sexuality is anxiety-ridden and stressful. Unfortunately, it just is.

So, if this holiday season will be your first time home or at a large family gathering since slamming that closet door closed, just take a deep breath.

Here's exactly how you're going to handle it: Simply put, just don't give a fuck about what anyone else thinks.

If your family loves, supports and cares for you, your sexual orientation is the very last thing on their minds.

Sure, the occasional question may come up about your day-to-day life while passing the cranberry sauce.

And though you're busy pretending to even understand how football works, your grandpa may ask if there is anyone you're seeing. But don't feel like you need to divulge more than you feel comfortable with.

If your family loves, supports and cares for you, your sexual orientation's the last thing on their mind.

Let's also remember: Under no circumstances should you have to repeat your "coming out" story.

You didn't just get engaged, give birth or overcome a disease, and I personally don't ever feel the necessity to rehash a moment in my personal history that gives me the spins.

Your best strategy is to just take advantage of your family dynamic, whether it's loud and liberal or quiet and conservative.

If, like me, you typically find yourself in the midst of four different conversations at Thanksgiving — showered in a mist of spit and food from your loudmouth family — embrace it!

Everyone is so distracted, they're probably more focused on the score of the game than you being gay. And it's unlikely that anyone will ask about your relationship status.

If the action is more low-key at your dinner table and conversations tend to be mild-mannered, take initiative and encourage dialogue about topics that you feel comfortable with.

Ask open-ended questions that encourage everyone to chime in, thus taking yourself out of the spotlight and putting it on others.

In other words, if you don't want to talk about being gay, then don't. Talk about something else.

It's as simple as that.

As someone who is plagued with the tendency to overanalyze and think only the worst of unfortunate situations, I can confidently say that you will be fine. I promise.

You already came out. If anything, you deserve a goddamn medal.