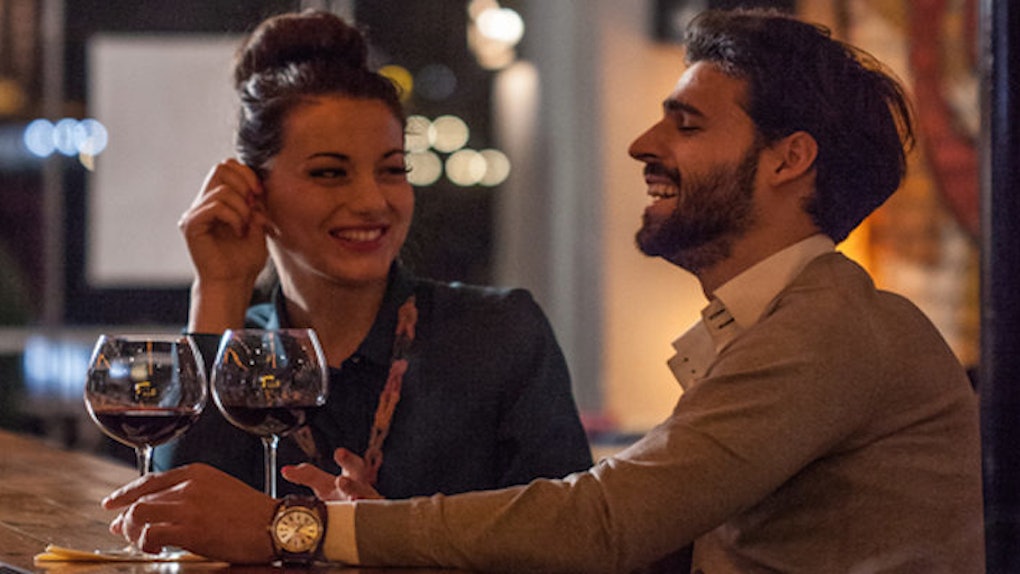 Why I'm Done Grabbing Drinks For A First Date

Ah, New York City. No other city can compare. It's a work hard, play hard concrete jungle, which more or less means one thing: On a first date, you're probably going to grab drinks.

This is a problem for me, because I'm officially done grabbing drinks on a first date.

A couple of weeks back, I went on a first date with a bartender. His shift and my workday had just ended, and we really just needed to blow off some steam. Alcohol was the answer. We decided to go around the corner for appetizers and cocktails -- y'know, like a 50/50-type deal. But I could smell from a block away that I was walking into a 20-percent-appetizers, 80-percent-cocktails-type deal. I quickly grew hesitant.

We ordered a wine and cheese plate first. And then he flashed me with a grin that screamed, I'm low-key trying to get you drunk.

I nodded my head.

“How about a nice rosé? Are you feeling glasses or a bottle?”

Glass, Sheena, I thought to myself. Say you want a f*cking glass. See, I was trying to stick to my firm resolution of starting and ending this date with only two glasses of wine in me. No more, no less.

Because I know the drunker I get, the more I want to drink and the more my perception gets skewed. I get less concerned with how good of a date my guy is and more concerned with whether or not I'm gonna ~get some~. How the hell was I supposed to give this guy a fair shot at love with wine goggles on?

As we sat there talking about what we like to do when we aren't working, I realized just how much I didn't have in common with him. Within 30 minutes of our date, I'd made up my mind about him. Sometimes, you just don't click with someone, and it isn't the end of the damn world.

But maybe I was being rash. Maybe I needed to wait a little longer before deciding to get rid of him forever. Maybe he was the kind of guy that snuck up on you with his intellect or swag or some special skill unbeknownst to me. Guys like that are rare -- so rare, they're practically hidden treasures -- but maybe bartender boy was one of them.

So when he tried to continue the date after the first round of drinks, I hung around.

One drink lightens the mood. Two drinks alter the mood. Three drinks? Fuh-get about it. At that point, I'm either hitting the floor or I've decided to spend my precious weeknight evening falling in love with a guy I could've sworn didn't pass his 8th grade English class.

Bartender boy brought me to a bar with live music later that night. It was the third stop on our three-dates-in-one journey.

"I wanted to say this to you earlier, but you look so cute," he said to me as we sat down (well, we half-fell down).

"Thanks," I said, twirling my hair and caressing his leg. He then took it upon himself to order us a round of dark, coffee-flavored shots.

It was at that moment that I drunkenly realized my thoughts on bartender boy had done a complete 180. Hours ago, I was set on my initial thoughts of him: Stupid. Boring. Cute if you squint your eyes, turn your head a certain way and imagine he's wearing a hat. Now, magically, he was clever. Intriguing. Handsome in a low-key way, but handsome, nonetheless.

And then I had a revelation that would forever change the way I approached the dating scene: If you get drunk enough, you can get along with anyone. Your worst enemies become your best friends, the ugly guy becomes the hottest thing since sliced bread and the people you once wrote off become people worth giving second chances.

Every other Saturday, I attend karaoke night at a seedy AF bar with my girlfriends. I get hammered. We're usually so drunk that we forget the lyrics to songs we know like the back of our hands. But it's totally cool, because at the end of the day, we still love each other, which we're capable of doing because we know each other. My girlfriends and I are so comfortable with each other that we can get stoned or drunk off our asses and there'll always be a home base to return to. We've cultivated a friendship as our foundation, and getting drunk one night won't change that.

First dates are a different story. Why would you want to get to know a random stranger's drunk self before knowing his sober self? That don't make sense to me.

What are we actually doing when we get too drunk on a first date? Are we really just trying to lighten the mood, or is it more than that? Are we trying to escape reality altogether?

When the next guy that comes my way asks me out, I'll throw him a proposition: "How about you take me mini-golfing?" I'll say classily. "Or maybe a restaurant that bans booze?" He'll laugh, but I'll stick to my guns. He and I need to get to know each other on the real, not on the fake. Because nothing fake is worth having.