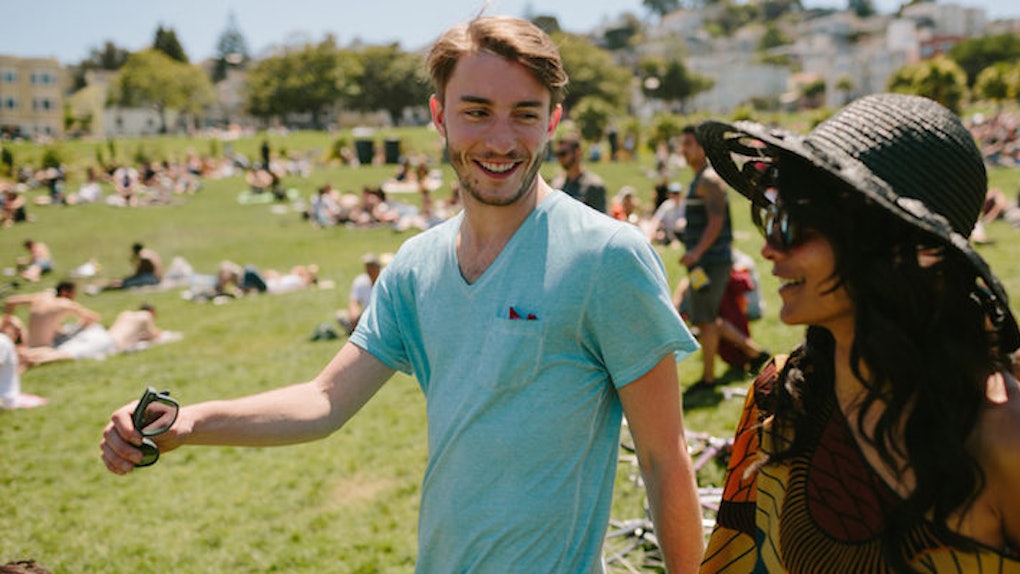 The other day, I went on my first date in two months. He was a bartender I'd met while out, and I decided to take him up on his dinner invitation for two reasons: one, we had a flirty little back-and-forth; and two, he was really cute.

"He's cute!" I remember giggling to my girlfriend at the bar. "He's got this, like, quirky thing going on."

"That's his charm!" the other bartender, who I wasn't eyeing, said. I figured Mr. Quirky probably had a bit of game and I wanted to see him spit it. So I gave him my number.

"Why is this guy texting me as if I'm going to disappear tomorrow?" I asked my friend as we were smoking on her rooftop one night. He'd just responded quickly once again. If he'd waited an hour instead of 30 seconds to text me back, I would've felt more excited to see him as our date approached.

"Because he likes you!" she said. "Why are you waiting to text him back when you've got your phone in your hand?"

"Because," I said, looking out at the New York skyline, "I'm here with you. I'm trying to live in the moment. And, OK, fine. I want him to think I actually have a life. I'll deal with him later."

I didn't feel guilty for saying that. Let's be real: More than anything, love's a game. Besides, bartender boy didn't know enough about me to be obsessed with me. His lack of text game immediately turned me off because it screamed one thing: Cling Cit-ay.

But there's such a fine line between between a guy being clingy and just being attentive. Here are the subtle yet significant differences.

A clingy guy makes you the center of his universe; an attentive guy takes into account what you say.

In the beginning, when you've gone on one to two dates, you 100 percent do not want to be the girl he's obsessed with.

If you are, it either means he's not dating other people, which would imply he's not in-demand or special, or it means he doesn't have much of a life because he's sitting around answering you faster than you even have time to think of a response.

An attentive guy will text you less frequently, but have a lot of meat in what he says. Like, the clingy guy will text you back and say "LOL," but Mr. Attentive won't do that. He'll wait longer, but tell you an action-packed story about that time he was little and went through the same thing you're going through now.

When you're in a relationship, of course your guy should be obsessed with you. That's a different story entirely. Locking things down with a guy means you're just as into him as he's into you, and that makes you clingy for each other, which is FIREWORKS.

A clingy guy doesn't have a ton of hobbies; an attentive guy does, and he just makes room for you.

On my date with the bartender, he asked me what I like to do in my free time.

"Reading. Exercising. Oh, singing! I love to sing. I'm hoping to make it a side gig..." I had so many answers I couldn't shut up.

Then, it was my turn to ask what he liked to do in his free time. He came up short.

"Oh, well, you know, I work so much that I don't really have a lot of time for other stuff..."

That was the moment I knew our first date wouldn't turn into a second. That was also the moment I realized why he was so willing to text me back within 30 seconds: because he had nothing else going on.

I don't care how much you work; everyone has wind-down time. And no, texting or watching TV isn't considered a hobby.

The attentive guy has a lot going on. That's why he's such a good listener: because he's spent his life cultivating things he loves to do, which requires paying close attention to detail.

He's also low-key clingy, which means he's thinking abut you even when he isn't texting you. He's just coming up with the right way -- and the right time -- to say what he has to say. Low-key clingy is OK.

A clingy guy is only clingy if you don't like him -- and if you do like him, he's attentive.

A guy gave me some great advice. I posted this Facebook status asking the world whether the bartender was clingy or just attentive, and here's what he had to say:

"He's only attentive or clingy depending on how much YOU like him."

Why hadn't I looked at it that way before? Because it's true. If this bartender were "the one," his suspicious response time wouldn't have scared me away. It would have made my heart race. And I probably would have been just as clingy back, sending a million heart-eye emojis, which I'd normally find a bit cheesy.

At the end of the day, I decided the bartender was just a little too clingy (among other things), so I let him go. I probably just didn't like him enough.