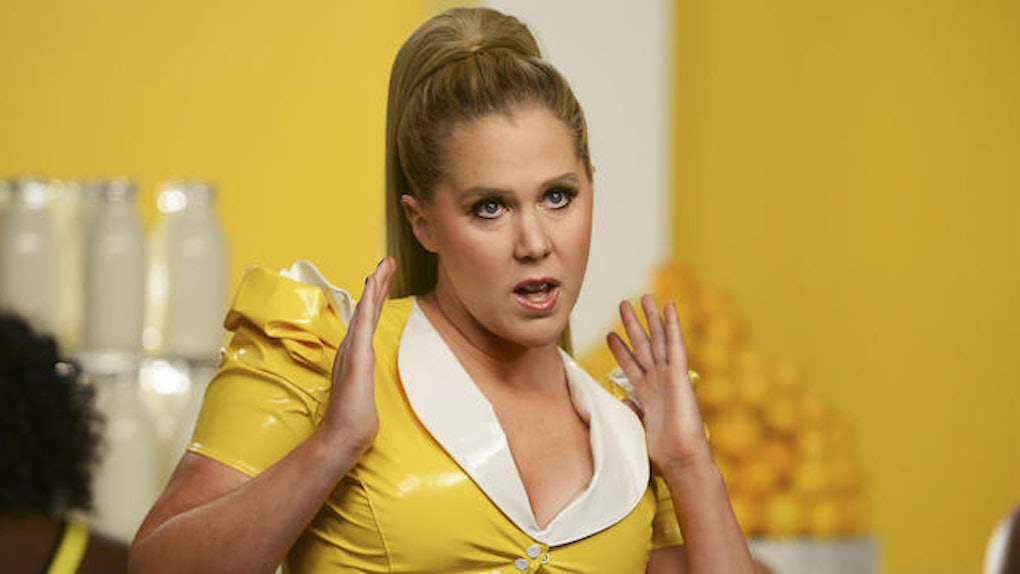 The older I get, the more I have the opportunity to reflect on what a true idiot I used to be.

For example, the way I used to approach dating was that of a brainwashed robot who believed TV and the world when it told me it was my duty as a female to be attractive to men — OR ELSE. (Or else what, exactly? I don't know. I just know I was afraid of it.)

Luckily, the more mature I became, the more clear it became that this is all a crock of shit. You will find truer happiness and a stronger love with someone who accepts you for you. Believe me.

Faking you are someone else only delays the process of finding true love.

For example, here are nine dumb things I used to do to impress boys at the beginning of a relationship:

Only ordered salads when we went out to eat.

Note to everyone: Pretending you don't like to eat delicious food doesn't make you impressive. It makes you hungry.

Eat what you want. It's OK if that's a salad, but if your heart song is truly made of hamburger and fries, don't let a boy be the reason you don't go for it.

In fact, don't let a boy be the reason you don't go for anything you want in life. SO MANY LIFE LESSONS TO LEARN AROUND SALAD.

Pretending you don't like to eat delicious food doesn't make you impressive. It makes you hungry.

Pretended to like sports/music I actually didn't give a fuck about.

It might be tempting to feign interest/knowledge about a topic you know nothing about in order to avoid making your date feel awkward or silly about their interests and/or to try to get them to like you.

Trust me, this will catch up with you in the long run, and fake convos only result in anxiety and pressure.

Slept in my makeup.

For some silly reason (*cough* the overwhelming oppression and objectification of women in the media *cough*), I thought if let a new love interest see me without mascara on, he might run for the hills.

Spoiler alert: My face is my face. Eventually, someone is going to see it.

Plus, sleeping in makeup is terrible for your skin and pillowcases, ultimately causing much more work and stress on your end in the morning, anyway!

Spoiler alert: My face is my face. Eventually, someone is going to see it.

Sprayed my pillows and sheets with perfume before he came over.

Sometimes, I still do this just for fun. I have, like, a BIG thing about smelling bad.

I thought if a boy slept over and smelled how amazing my pillow was (and also see that it smelled like me), he might think that is the natural, human body scent I give off like a unicorn fairy princess.

In reality, it's just left over Sweet Pea body spray from my youth and Bath & Body Works.

Tried to match my bra to my underwear.

Ah yes. Another unrealistic and agonizing effort I forced upon myself.

First of all, for something we wear every day, bras and undies are EXPENSIVE.

Second, unless you wash your unmentionables all day, err' day, you are almost never going to have the polka dot underwear ready to go at the same time as your polka dot bra. Sometimes (read: every time), you just gotta mix and match.

Remember: You're your own lingerie snowflake.

In the beginning of a relationship, I would shave everything, every day, JUST IN CASE.

Again, totally acceptable to want to maintain a certain amount of beauty hygiene, but this was also totally unacceptable when it came to my everyday routine and the bathroom time I was allotted in the mornings due to the restrictions my roommates put on me.

Tip: If you can get past the prickly stage (and especially if you have light-colored hair) they may not even notice a little bit of soft fuzz.

Across the board, I used to think being able to binge-drink made me cool. When in reality, it just made me drunk.

Beer has always made me sloppy, tired, and full — but yet again, TV and movies and my brother's older brother idiot friends made me think it would make me awesome if I drank it.

I used to think being able to binge-drink made me cool. When in reality, it just made me drunk.

Truth be told? I am awesome on tequila, emotional on vodka and lousy on PBR.

Pick your poison according to your own body's wants — not by what you think is the take-away lesson from "Coyote Ugly."

Ransacked/hid everything in my medicine cabinet.

I'm a really snotty human. If it exists, I'm probably allergic to it.

You got a tummy ache? I've got two packs of Tums, three Pepto-Bismols (tablets and liquid) and two different kinds of Gas-X to handle that, baby.

You got a scratch? You want Neosporin, or is straight-up Vaseline more your style?

When a guy came over for the first time, I'd wipe everything into a bin with one hand and leave only toothpaste and bandaids.

"NEVER LET THEM KNOW YOU SNEEZE!!!" I would roar to myself in my reflection, when what I really should have been shouting was, "Never let them know you have awesome CVS coupons cause they'll want to steal that shit!"

Never let him pay the bill.

Thanks to Destiny's Child, I thought the only way to establish respect was to pay for my own unlimited salad and breadsticks.

If I could go back and talk to my younger self and give her some advice, it would be this: Life is expensive. Let them pay for the breadsticks.

As a woman, most traditional standards and expectations forced on us are intended for our demise — letting a man pay for the date is one of the few perks we get of having ovaries. Take it, damn it.

And take the breadsticks with you.