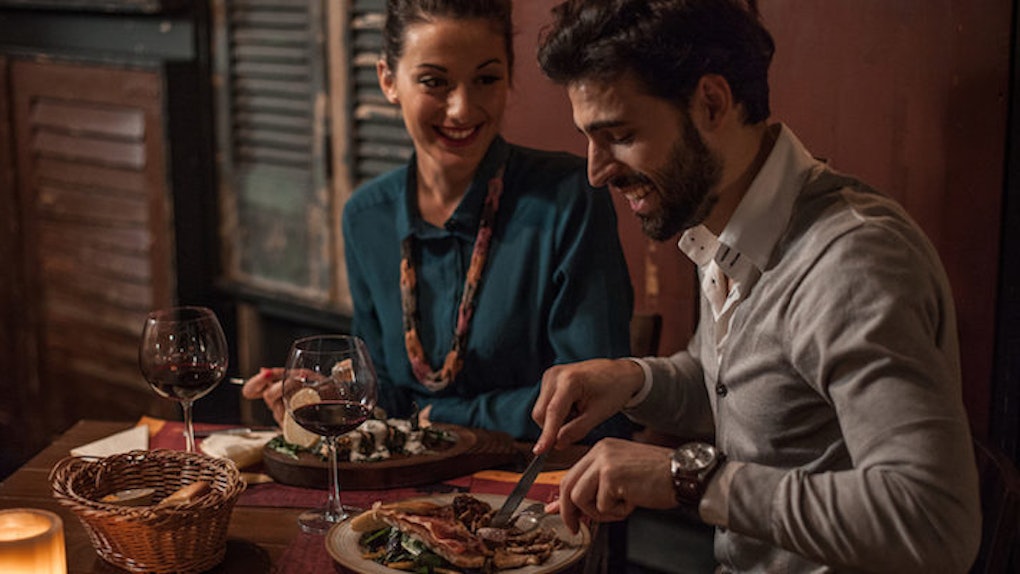 Why A Guy Shouldn't Have To Pay For The First Date

Men, what would happen if you were in a restaurant, the server came over and you said, “Check please? And can you make that separate?” Hmm? You probably wouldn't get a call back, right?

These last few months, I have been going on multiple dates for the first time ever. Before that, it was just with friends, and then I was in a six-year monogamous relationship.

On my dates, I've come to notice that every single man trips out when I start taking my card out to pay for my share of the bill. At first, I was a little confused as to why. They all ask what I'm doing with that look of WTF on their faces.

If we lived in traditional times where women stayed at home, cleaned, cooked dinner, raised the family and served thy husband, then OK, I'd get it. That's not how it is though. Women are more independent than ever. We work hard and play hard, just like men. We've come to a time where we, as women, are self-made, successful, in touch with ourselves and so much more.

I'm not trying to take the femininity away from women and the masculinity and chivalry away from men. There are many other ways to show these things. If a man wants to pay for the tab because he wants to pay for it, OK. But we women shouldn't assume anything.

I pay for myself and if I'm feeling generous, I pay for the guy unless he is persistent that he pay. Every single guy that I've gone on a date with can vouch for that.

The first time this whole awkward paying for the tab thing came up, I asked the guy, “Does a girl not usually pay for her tab?” He responded with a “no.” So women, what do you do instead? Do you sit there quietly and assume the guy is going to pay? Do you look at him while he reaches for his wallet and act as nothing is happening? That's pretty darn awkward to me.

I've come to learn with each guy I've gone on a date with that none of their past dates have paid or offered to pay. I even get a “thank you” here and there for being considerate and offering to pay. That's pretty sad that a guy had to say “thank you” because I was considerate to pay for myself or split the tab. Another guy the other day said, “Thank you. A girl has never offered to pay for me before.”

I'm not trying to take a guy's side in anything more than this topic at the moment. We are shifting pretty fast into our now modern day culture, and there has to be fair play at some point.

I've started feeling bad for guys in this situation. It's pretty jacked up that they feel like they have to pay all the time. A man and a woman are going on a first date for the same reason: to get to know each other. Who signed him up for the tab?

There are a few solutions to remedy the awkward paying situation.

When all is said and done, when the waiter comes to your table to ask if you would like a box and the tab, you don't need to sit there quietly looking at the guy. Speak up and say, “Yes please, can we get separate bills? Thank you.” Easy as that.

Or you could offer to split the tab. You've had a few drinks, appetizers and are ready to call it a night. When the tab comes, offer to spilt it with the guy and take out the plastic.

Better yet, open your own tab at the start of the night. Once you get to the bar, just pull out your card and open a tab for yourself. At the end, just close it and be done. If you want to get him a drink, add it to your tab. If not, don't. It's stress-free.

You can also always pay for him. Just as guys like to be kind and pay for a woman when they go out for dinner, women can do the same for men. It's a nice treat for either person when it happens.

Finally, you could take turns paying. Sometimes we like to make going on a first date a marathon. First we go to a live event, then grab dinner, dancing and end the night with drinks. There's nothing wrong with taking turns to pay for your night out. No worries, I got dinner, you can get the drinks.

Try it. Then you'll go home feeling like you don't owe him anything.