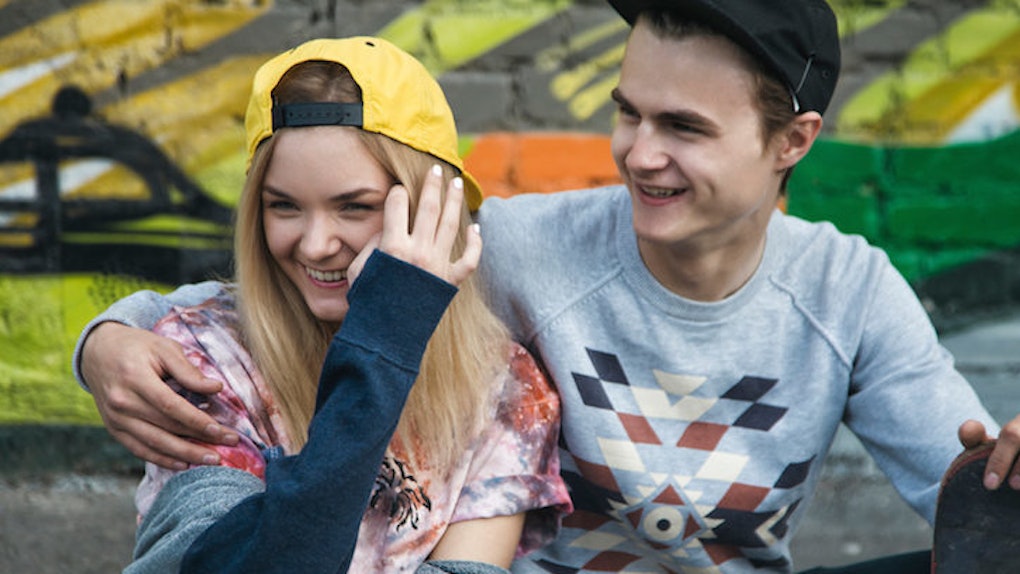 13 Ways That Dating Has Literally Not Changed Since Middle School

Middle school was f*cking horrible. I'm going to just start with that.

I think we can all agree, yes? Middle school was F*CKING HORRIBLE. Like, I just Googled middle school, and this is what Google found:

Everything about middle school was awful. Everyone was in a bad phase -- whether that meant having straight-cut bangs, baby fat, acne or shiny braces. Of course, all of this was topped off with uncontrollable hormones and low self-esteem.

I'm literally getting hives just thinking about it. I'm so glad we don't have to deal with any of that anymore, aren't you? Being an adult is so great, right? We're so mature now.

Do you remember "dating" in middle school? It was all awkward first dates, cryptic messages and a crippling fear of rejection.

What's that, you say? That's what dating is like in your twenties?

Dating hasn't changed at ALL since we were 13. Here are 13 concrete, irrefutable reasons why:

1. Women still pretend not to like a guy -- and then secretly obsess about him with their friends.

When it comes to dealing with the male population, nothing has changed. We still pretend we don't care about a dude -- only to obsess about each lame detail of our "relationship" to our girlfriends.

In middle school, we would sit on the bleachers trying to decode a guy's every single move to figure out his feelings. Now, we're doing the exact same thing, only in wine bars and with screenshots of texts.

2. Guys still have NO idea what a good date is.

Guys still think taking you on a stupid date is okay.

In middle school, he took you to the mall to eat pasta from a chain restaurant. These days, he's taking you to sports games and bad concerts ... because guys still have no f*cking idea what they're doing.

3. We all still send cryptic messages.

In middle school, we passed notes to our crushes to decode their emotions. "Do you like me? Check 'yes,' 'no,' or 'maybe.'"

Remember getting 'maybe'? That was the worst.

These days, text messaging has stepped in to ruin our romantic lives. We send carefully-crafted texts. We've run them by all of our friends and have projected so much meaning into every single one.

It's exhausting. We all still have zero in-person communication skills.

4. Guys are still afraid of commitment.

Those commitment-phobic seventh graders who wouldn't hold your hand in public? They haven't gone anywhere.

You'd think that once you get into your twenties you're going to finally find your BAE. But the truth is, guys are just as sh*tty. You're still going to have those almost-relationships and heartbreaking fizzles. It's awesome.

5. Guys still have zero idea of how to dress for a date.

As a woman, you come into your personal style as you get older. You have a few fabulous pieces, and you start to know yourself and what works for you.

Guys will still show up to a dinner date in sneakers and a graphic tee. You find yourself looking at every guy who takes you out and wondering, "WTF? Did he get dressed in the dark?"

Doesn't matter if it's middle school or your twenties. Men and women will never see eye-to-eye when it comes to clothes.

6. Women are still insane when it comes to love.

Remember being hormone-driven and totally insane as a middle schooler? Well, women are still that crazy when it comes to love (life?).

We're still obsessive, controlling and constantly taking his actions as a sign of something. We still have zero control of our emotions. We may be totally crazy, but men made us this way.

And it probably started in middle school.

7. If a guy is an asshole, we still think he likes us.

When we were kids, we were always told, "If he's mean to you, that means he likes you." Basically we've been brought up to think that asshole behavior is a sign of affection.

That is pretty f*cked up.

Guys are still pieces of sh*t to women because it works. We still take a guy being a total dick as a sign that's he's feeling our vibe.

When we were chubby, weird middle schoolers playing outdoors, boys would yank on our pigtails, and we hated it. Now that we're adults, we don't mind a little hair-pulling, provided it's consensual ... if you catch my drift.

Boys are still as gross as they were in middle school. We still vacillate between "I want to kill him because he is so f*cking horrible" and "I also want to kiss him and make lots of babies with him."

Isn't love beautiful? I feel so warm and fuzzy inside.

10. Guys still have NO idea what a romantic gesture is.

Men are still as clueless as they were when they were twelve when it comes to being ~romantic~.

A guy in middle school probably thought the coolest, sexiest thing he could do was give a girl half of his Fruit Roll-up. We ladies should want a dozen roses and a serenade, but we're still down for shared snacks. So I guess we're both pretty clueless in the romance department.

11. Guys are still listening to their mothers.

Guys are all still a bunch of mama's boys. Doesn't change and never will.

12. We will still be mean to guys when we like them.

Being a total bitch to get what we want has always worked, so why not just continue doing it? I've always found I get my way if I'm a c*nt. It's a tried-and-true method.

We use rudeness as a defense mechanism. We don't have to show our hand if we feign indifference, and our fake apathy and unattainability makes guys like us. OMG. F*ck dating. Seriously.

Guys are still into the girl who likes sports, eats burgers, drinks beer (root beer in middle school, maybe?) and still has a totally hot body. Guys like the "cool girl." It's always been like that.

Ever since we were kids, that one popular girl who was stupid AF always got the hot, popular guy. It's all about bragging rights.

I know this article made you really excited about dating. I, for one, am just throwing in the towel now. Bye.