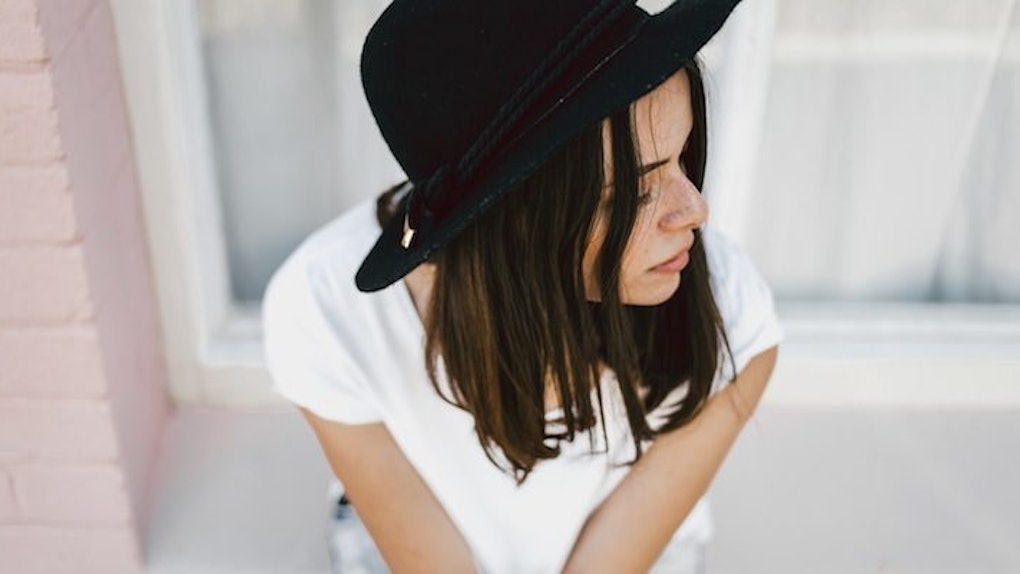 Once upon a time, in a glittering land far, far away, I was 24 years old and having a drink with my best friend, Tyler*.

Tyler and I hadn't seen each other in months because I had been... well, consumed (to say the least). I was in the thick of one of those relationships that swallow you whole and make you forget you're a fully-realized human being with a life all on your own. (PSA: Don't try this at home, girls. Before you know it, your identity will be on a missing persons list.)

Anyway, I was really enjoying his refreshing company. There had been a time when the two of us were attached at the hip: finishing each other's sentences and recklessly running around town like a modern, queer, lightly-hipster version of "Thelma & Louise."

I had forgotten how much I missed him. I missed baking in the Southern California sunshine with him, laughing over the mundane tragedies of youth, slugging back sugary cocktails and gazing at the world through a comical filter, where everything – even pain, death and destruction – could be funny.

I felt my phone vibrate against my bare legs, its intense buzzing penetrating through my vintage faux crocodile clutch. But I didn't want to answer it.

I was lost in a glorious moment with a person I hardly saw anymore, but loved dearly. So, I pressed that tiny little silence button through the thin fabric of my knock-off designer purse and carried on.

But it vibrated again.

I held my breath.

And again. I looked at the floor.

And again. I took a lock of my fake blonde hair and twisted it around my pointer finger.

"Hey, Zara, I don't mind if you answer your phone. It sounds like someone is really trying to reach you."

"No. It's OK," I said, mustering up my best Stepford Wife smile.

"Uh, who is calling you?" He pointed a long, tattooed finger in my face.

I felt my cheeks get hot.

"Doesn't she know we're hanging out?" I already had the sinking sensation that he got a dark vibe from her, and his exasperated tone confirmed that my instinct was dead-on.

"Why the hell is she blowing up your phone? You've only been gone 20 minutes. And why are you avoiding her call like it's herpes?"

He looked like one of those police dogs that sniff out drugs from suspicious-looking suitcases at the airport. I imagined him in the little blue dog vest.

The truth was, I wasn't picking up her call because I knew if I did, she would pester me with incessant questions about EXACTLY where I was, EXACTLY who I was with, what the HELL I was drinking, how many DRINKS I had, what I was WEARING and WHY I WAS IN SILVER LAKE WHEN I LIVED IN WEST HOLLYWOOD.

I was in the throes of a very bizarre stage in my life where I wore lots of asymmetrical, billowing black dresses that purposefully unflattened my slight frame. I thought I looked fierce and fashionable. But in retrospect, I realize I looked like I was auditioning for "The Witches of Eastwick."

By the tenth call, I knew I had to fucking pick up the goddamn phone or my cover would be totally blown. I pressed the phone up to my ear and spoke to Bria in a hushed tone. I answered all of her VERY SPECIFIC questions as serenely and patiently as I possibly could.

"Um. What the hell was THAT?" Tyler asked, looking as horrified as if he'd just seen his Mormon father strut down Santa Monica Boulevard in high heels.

He lit up his millionth cigarette, checked out the ample ass of our over-tanned Ken doll look-alike waiter and gave me that cutting – yet loving – staredown that can only be pulled off by gay men and moms. His piercing eyes looked both quizzical and disappointed.

"Look, Tyler. I KNOW, I KNOW, I KNOW it sounds like Bria is grilling me. But she just can't help it. She's been through a lot." I reapplied my lipstick like a true, controlled, Connecticut housewife.

"Define 'been through a lot?'"

I watched his cigarette smoke elegantly curl into the air and gracefully dissipate into the polluted sky. It looked dangerous, but also glamorous and beautiful, like an overworked ballerina.

"Can I get a cigarette?" I asked, my teeth gnawing on my Russian blue manicure savagely.

He reluctantly handed me a Marlboro Light. His lack of facial expression made it clear that I wasn't going to get away with avoiding his question.

That's the problem with best friends. They don't get distracted when you use the old "ask for a cigarette so they forget what you've been talking about tactic," even if they've been diagnosed with ADHD like Tyler.

"Her last three girlfriends cheated on her. She just gets nervous."

My hands shook as I tried and failed to light a match.

"And grills you about every single detail when you're out for a few hours with your best friend of 15 years?" Tyler added, leaning over and snatching the matches out of my hand to light my cigarette for me.

I stared into the little blue flame, half hoping it would start talking and tell me what to do, and half hoping it would spiral out of control and burn my hand so that I could go to the hospital and get treated for a burn. Because honestly, that seemed like a better option than this conversation.

This conversation revealed the truth, and the truth was ugly.

The truth was, not only did Bria incessantly grill me on my whereabouts every moment we were apart, but she also constantly went through my phone. And emails. And dresser drawers.

Even when I was soundly sleeping next to her, in the innocent bliss of medicated sleep, she had random bouts of wild insecurity. She would serial-text me, accusing me of flirting with other women.

But I understood. She had given her trust to a girl before, and the girl had betrayed that trust. That's the most painful experience possible... right?

I knew this because, while I had never been cheated on, I had been betrayed by another human being in a very brutal way. I knew how it felt to be completely played for a fool by someone who you thought was on your side. So, I was patient through the endless yelling, the constant prying and the never-ending snooping.

But it left an uncomfortable feeling in the pit of my stomach, giving me deep-rooted, underlying anxiety that even Xanax couldn't seem to quell.

One day in therapy, I casually brought up that Bria had gone through my phone.

"She did WHAT?!" My usually yogi-calm therapist gasped, throwing her hand up against her mouth.

"I know. I don't like it either. But see, she's been hurt a lot by past relationships. She's been cheated on."

I wanted to emphasize the CHEATING, as if being CHEATED ON justified all irrational neuroses.

"Well, have you ever cheated on her?"

"Well, then how is it YOUR problem?"

"It's unfair to carry the baggage of your last relationship into your current relationship. I don't care what her exes have done to her. Why should you repent for the sins of her exes?"

I hopped into my car. But instead of heading back to my job, I drove around a few times with the windows down. I gazed at the pristine palm trees juxtaposed against the smoggy sky, and I felt the humid air brush up against my skin.

Suddenly, it all came together. Just because someone cheated on you, that doesn't give you the right to act out in your new relationship.

I immediately decided I wasn't going to tolerate Bria's invasive behavior anymore. I confronted her, but she wasn't able to shake it. That eventually lead to the demise of our relationship.

But I noticed that so many of my friends – gay, straight, whatever – were allowing their partners' crazy, outlandish, irrational behavior just because these partners had been previously cheated on.

Look, it absolutely sucks to be cheated on. But if you're going to let the demons of your last relationship determine how you treat your next partner, you're not ready for a relationship. You need time to heal before your next relationship, because you're just going to hurt your new, innocent partner if you're still working through the pain.

Of course, your partner should be understanding and caring. But you should never, ever use your past as an excuse to treat them poorly.

There is no room for a fresh start when you're knee-deep in the pain of the past.

The beauty of a new relationship is the fact that it's a fresh start. And there is no room for a fresh start when you're still knee-deep in the pain of the past.