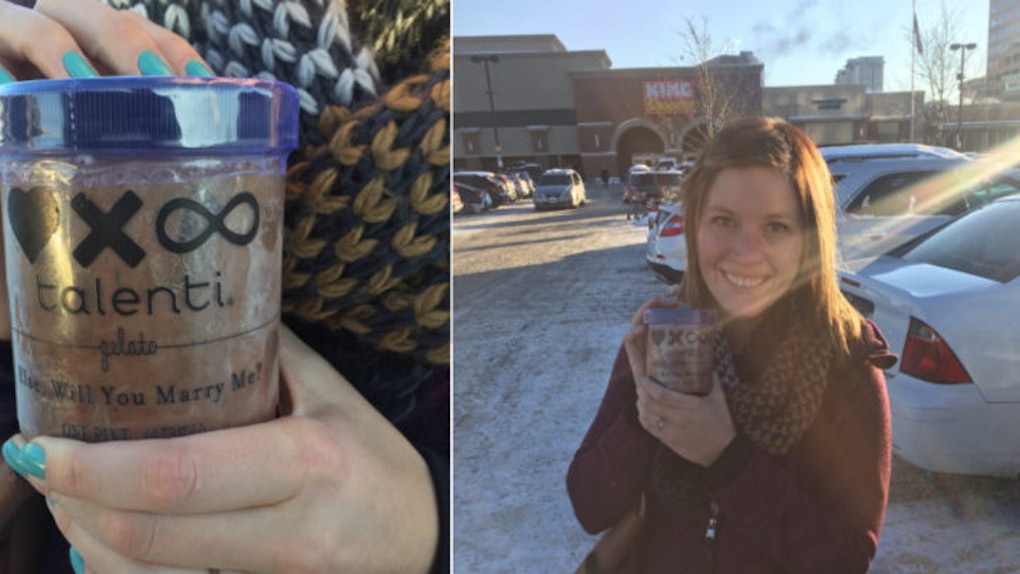 Boyfriend Made A Custom Pint Of Ice Cream To Propose

We need to talk about these guys raising the bar when it comes to proposals.

Like this guy who built an elaborate fairytale puzzle book, or this dude who faked being arrested to pop the question to his girlfriend, who happens to be a correction officer.

We all find different things romantic. Personally, romance to me is ice cream.

Buy me ice cream and I'm yours forever.

That's exactly what Luke Munsterteiger did for his girlfriend of almost two years, Else Schmit.

Luke and Else are known for splitting pints of the Italian gelato Talenti together, and aim to try every flavor the brand offers.

Naturally, Else's sister and mother suggested the proposal have something to do with their sweet hobby.

Luke reached out to the company through their website and explained their shared love of fine Italian gelato.

Talenti responded with a pretty great idea -- to design a label using the couple's favorite emojis (a heart, multiplication symbol and infinity... AKA, love times forever) along with "Else, Will You Marry Me?" as the flavor.

(It was really Fudge Brownie, but shh...)

Else's mom distracted her daughter, while Luke planted the custom container in the store. He said,

I snuck it into the store under my coat and then placed it toward the back, hoping no one would take it by mistake.

She almost picked a Pumpkin Spice pint before Luke suggested another flavor. Else said,

He opened the freezer door and pointed to one but I couldn't see the label, so I was totally oblivious. As I picked it up and read it I couldn't believe it — there was no way! Luke had taken a step back so when I turned around he was already on one knee. I was super cheesed, of course.

She was completely shocked when her mother and sister showed up in the frozen food aisle.

Else's gorgeous ring is a family heirloom that her mother gave to Luke from the 1920s.

The couple collects all of the empty pints they've tried together. Else said,

We'll definitely be keeping this one! And we might use the rest of them as decorations for the wedding.