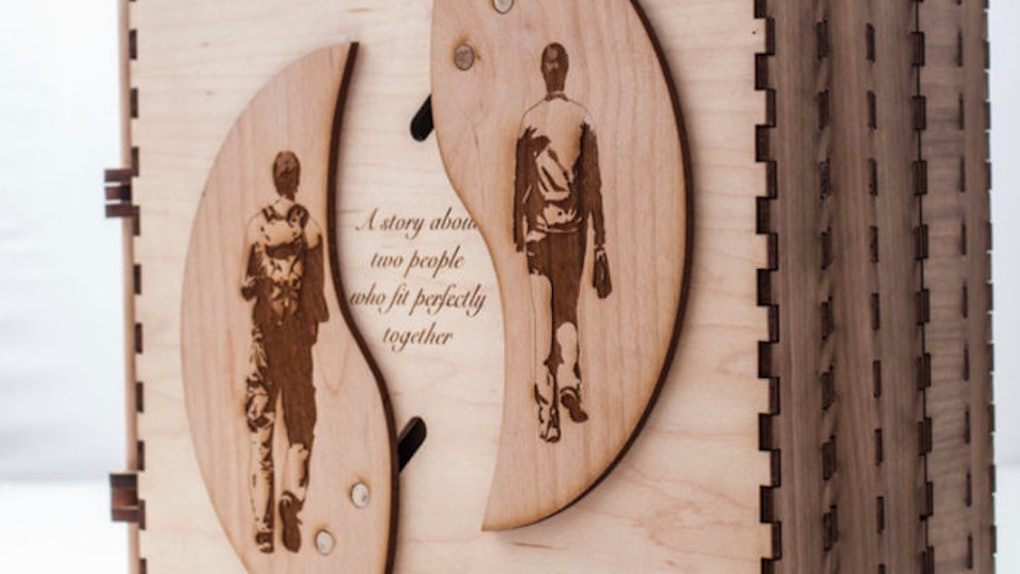 This Fairytale Puzzle Is The Most Elaborate Proposal

The holidays are one of the most romantic times of the year.

Even if you're drowning your single sorrows in some spiked eggnog, you can't even be bitter at love around this time.

Whether that's a new couple finally admitting feelings for each other or a couple who is ready to take their relationship to the next huge stage.

Reddit user BigChewyPretzels knew that he wanted to spend the rest of his life with his girlfriend, but he also wanted to make the proposal as storybook-worthy as the fairytales she grew up making for her own family.

Chapter one is about how the couple first met. He wrote,

To solve the puzzle, you need to know that we met at SantaCon, how we were dressed and where we had our first kiss. I was Super Santa, she was Ms. Gingerbread and we kissed under a mistletoe. Once those three elements in the circle are lined up, the christmas tree can slide up. That unlocks the next chapter.

The book itself is eight pages. Half the pages have a story etched into the wood, and the other half are puzzles.

The back cover is the road we were traveling on the day that I proposed. I found an image online and then photoshopped the RV in. Around the edges you'll see that I added semi-circles with little engagement rings embedded.

Meanwhile, I will probably be proposed to in a Burger King parking lot.

When his girlfriend reached the end of the book, she discovered a handmade engagement ring.

If you love someone enough to build something like this, this romantic fella made a how-to guide.

Oh, and she said yes.

How could she not? A stranger could hand me this in Port Authority in New York City at three in the morning, and I would say yes.

Citations: Building a fairytale puzzle book to propose to my gf (Imgur)