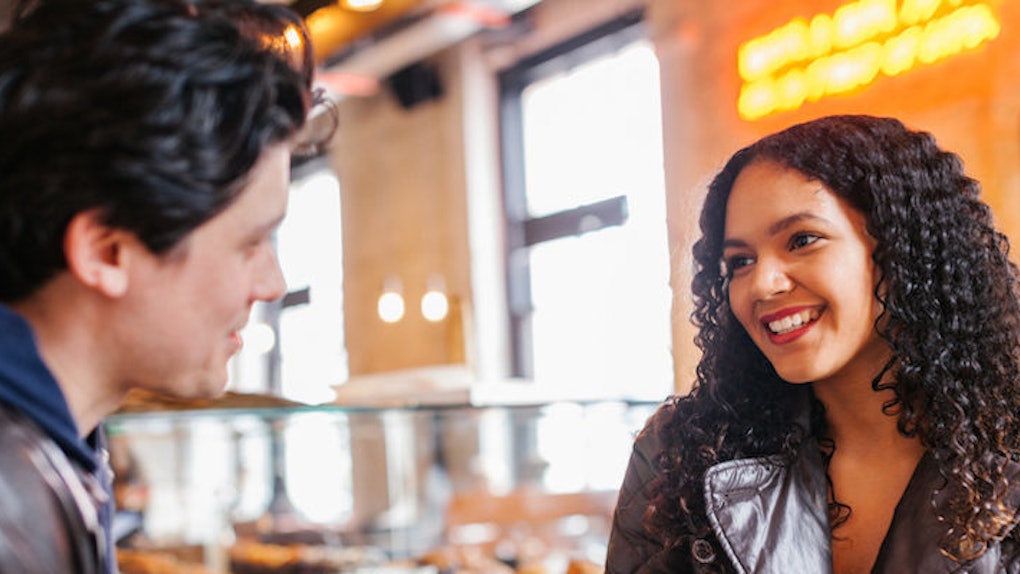 I walked into the month of February with a little bit of a broken heart.

A guy I had been making googly eyes with since the summer decided to get on a plane and leave the country for the next five months. I did what any rational, level-headed, madly-in-love person would do: I offered to go with him.

When he laughed at that idea, reminding me I didn't even have a passport -- let alone the time -- to travel the world with him, I counter-offered with a game plan to find a way to make this budding relationship work.

A long-distance relationship and a 12-hour time difference? Piece of cake! Anything seemed easier than losing a guy who made my heart dance like it was at a Calvin Harris concert.

But the guy laughed again, this time saying something that made me want to scream out loud in the middle of Third Avenue on a rainy Tuesday morning.

He said, “Let's just talk when I get back. How long have you been single for, anyway? I doubt that will change.”

He was right. I have a resume, a track record, and a reputation for being perpetually single. I have learned that I chase after guys who are in some way unavailable. They live far away or keep me far away. The main reason I am always single is that I waste my time with too many Mr. Wrongs.

It was time to change. It was time to stop rolling my eyes at online dating and canceling first dates with guys who friends wanted to set me up with.

Plus, February included Valentine's Day, and the last thing I wanted was to spend that day nestled into my couch cushion, sighing over another failed attempt at love.

So I made a challenge for myself, and I didn't tell anybody about it. I would go on exactly 14 first dates in the month of February. Everyone always says that dating is a numbers game, and 14 seemed like an absurd, but not impossible, number of guys to meet and greet in 29 days.

Here are the 14 lessons I learned from my 14-first-dates challenge.

Sometimes I'd go on a date with a guy, and we'd chat for two hours and laugh so hard that the people around us would get up and leave. But then I'd never hear from the guy again.

The reason people don't want to go on a second or third date with you isn't always about you. They could be busy with their lives, seeing other people that they're falling for even more, or might just not feel any attraction. That doesn't mean you need to change who you are. It just means you have to let it go, fast.

Don't feel disappointed or hurt. Remind yourself that you knew this person for a total of three days. It wasn't a perfect match, and now it's time to meet somebody else.

2. You don't need to give everybody a second chance.

I like to attempt to find the good in all people, and sometimes that good doesn't show up on a first date. I used to have a rule that if the guy didn't do anything to offend me, I would give him a second date and a second chance, even if I wasn't feeling any kind of connection on the first.

But that just became a waste of time for both the guy and myself. If you're on a first date and you really aren't feeling it, don't force yourself to go out on a second one. You don't owe the person a second chance or a second glass of happy-hour Chardonnay.

Some of my dates lasted for four hours, and some lasted for only 35 minutes. But if after 30 minutes I didn't feel a connection or just wasn't having a good time, I would politely end the conversation and let him know that I had to leave.

There's nothing wrong with a quick first date over one cup of coffee or a walk around the park. If there's a spark or interest, you can always plan a second date that's longer.

The easiest thing to do when you're not into someone is just disappear. I'm guilty of doing that instead of texting or calling the person and letting him know I'm truly not interested. But when you're the one being ghosted by a guy you enjoyed meeting, you start to realize that just not responding to someone is rude, inconsiderate and a waste of time.

It's better to send a quick “Let's just be friends” text than nothing at all. Plus, it's a small world. You will (and I have) run into someone months later and have to deal with the awkward moment when he or she asks why you disappeared.

When I started this experiment, I promised myself that I would be open to meeting different kinds of people, even people whose profiles didn't stand out to me at first. So I said yes to almost every guy who asked me on a first date.

The majority of the time, the guys I wanted a second date with were the ones whose profiles I would have glossed over. You never know who you're going to get along with IRL, so say yes at the start.

6. Bring it all to the first date.

I was 100 percent my goofy, weird and often clumsy self on all of these dates. I decided to go into the dates without putting on a front or acting like somebody else. If a guy didn't enjoy my quirks on a first date, I was glad there wasn't a second.

7. More than two dates a day is exhausting.

February is the shortest month of the year, so getting 14 dates in was a bit tricky. (Leap Year helped a little with that, though.) There were some days when I had four back-to-back coffee dates. By the end of the fourth date, I was exhausted and overly caffeinated.

There's nothing wrong with scheduling two dates in one day, but any more than that will be disastrous to your mind and possibly your body.

I don't see anything wrong with Googling a person before meeting for a first date, but don't dig too deep. Don't stalk his Instagram from 14 weeks back or find out who his ex-girlfriend was and when they broke up.

I've made that mistake and it's always awkward to know too much about a person before you actually meet them.

9. Dating before you're ready doesn't work.

The first couple of dates I went on were bad. I wasn't truly open to dating and I was still crushed about the guy who jet-setted out of my life. Before you go on a first date, make sure you're open to the idea of meeting a new person, or you're setting yourself up for a personal disaster.

10. Say no to things that make you uncomfortable.

If you don't want to travel 45 minutes to meet someone at a bar or stay for a second drink, it's OK to say no. It's OK to do only what makes you comfortable. It's OK to be selfish on a first date.

If I was having a busy weekend or working late, I would ask the guy to meet me near where I already was or someplace in the middle -- instead of jumping on two trains to travel all the way to his stomping ground.

Some people are good at branding themselves on social media and in the digital world. Their profiles were carefully curated with filtered photos that made them look fun, and their taglines or usernames were witty. But some people who are great in real life are not into social media or taking selfies. Or they might just not know how to represent themselves well online.

Either way, judge someone more by your conversation with them and not by what their profile looks like.

12. Too many dating apps will make your phone crash.

At one time, I had seven dating apps on my phone. I could barely open one without my entire iPhone 5S crashing. I started to get anxiety from having to open so many different apps to answer messages from guys on each. By the second week of February, I decided to use only one dating app at a time and delete the rest.

During this experiment, I would go through every week and rewrite my bio or switch out a photo or two. Sometimes I would even ask friends to look at my profile and give me critiques and suggestions. Keeping your profile fresh and fun will make you feel like you're taking dating seriously.

Yes, a part of me thought by the end of this experiment I would find my Mr. Forever. The truth is, I didn't find anybody I was excited to see for a third or fourth date. You can go on 14, 30 or even 50 first dates and still find yourself back to square one in the love department.

Even after 14 blahh-worthy dates, I felt a little better about my little broken heart. I met 14 new people, for one. And most importantly, I realized that I am worthy of finding someone who isn't a waste of time -- someone who I'm actually excited to spend time with.