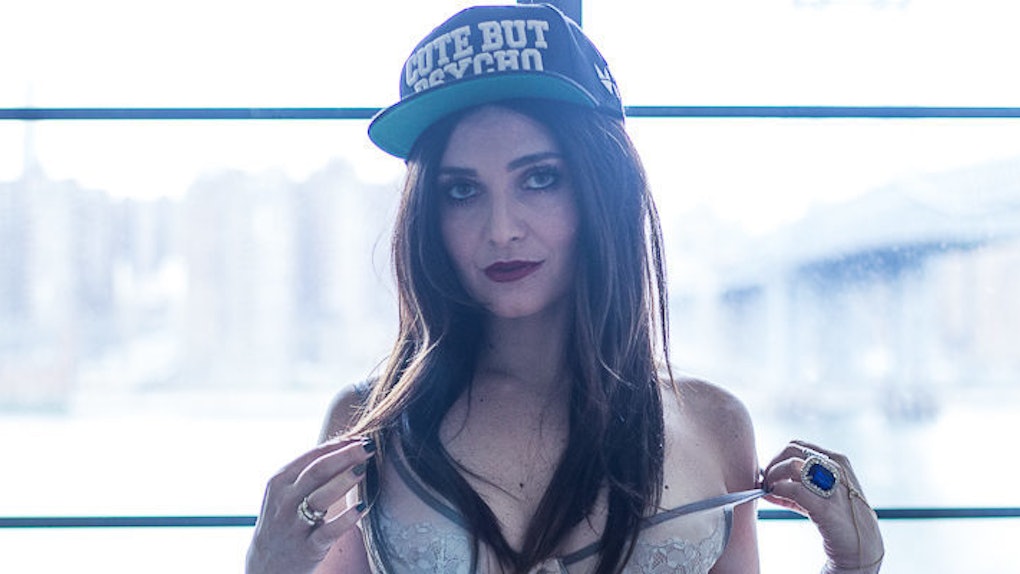 "Heyyyy, sorrrrrry. I'm super f*cking late!" I shouted to no one in particular as I haphazardly waltzed into a super glam Upper East Side restaurant like a bat soaring out of a dirty downtown hell.

The chunky heels of my over-the-knee suede boots loudly clanked against the delicate white marble floors, as I scanned the simple-yet-chic dining room looking for my Tinder date. What the hell did she even look like again?

I clutched my cell phone with my shaky, bitten-down hands and sailed through the restaurant completely forgetting to check in with the hostess.

"Madame?" (I loved being called Madame; it makes me feel like a chic French heiress), a beautiful girl with shiny blond hair and a $650 DVF wrap dress said to me. She gently tapped me on my distressed leather bomber jacket, probably sensing my frenetic energy.

"Are you looking for someone?"

"Uhhh, ummm, uhhh -- DYLAN!" That was it: DYLAN. I had swiped right for her on Tinder. The least I could do was remember her goddamn name.

Get it together, Zara. Get it f*cking together.

The next thing I knew, I was sitting across from Dylan. She was wearing a civilized button-down and had clear, kind eyes. She looked like a grown-up who owned an apartment. Maybe even a townhouse. I looked like a teenage runaway.

"So sorry I'm late. I just got off the phone with my brother. He's having a TOTAL mental breakdown, is in a CRISIS and has to take medical leave off work, and I have to orchestrate the whole damn thing and be the middle man between him and my parents and all these therapists. I mean I GET it. God knows I had a bad breakdown not that long ago... have you ever had a breakdown...?"

My voice trailed off. I stared into space trying to process the very intense, pressing conversation I had just had with my darling older brother while walking to dinner. He told me he had been chain-smoking for several days and couldn't get out of bed.

"I'm sorry to hear about that -- I bet you need a glass of wine. Let me get us some wine."

"Yes!" I practically jumped out of my chair. WINE sounded so f*cking soothing. In fact, I don't think I had ever needed a glass of wine with such a ferocity as I did in that moment.

"What do you prefer, red or white?" She asked, her eyes searching for the waiter.

"Oh, I'm a basic bitch, so obviously I like white wine," I answered as I chewed on a chipped fuchsia nail.

Within minutes, a nice cold glass of Sauvignon Blanc was sitting pretty in front of us. I took a long hard sip.

"What?" Dylan looked alarmed. "Do you not like the wine?"

"No it's wonderful, magical tasting even -- it's just that I JUST started Prozac like three days ago. I'm not quite sure how it's going to mix with booze, and I think I'm already BUZZED off one sip! I better be careful. DON'T WANT TO BLACK OUT ON A FIRST DATE!" I chuckled a like a f*cking psychopath.

"You never know how these pills mix with booze." I said, taking another sip.

(I know. I know. I was clearly spiraling, but I just couldn't stop myself.)

"Speaking of the Prozac, do you mind if we switch sides of the table? I'm on Prozac because I have Obsessive Compulsive Disorder, not the organizational kind you see in movies in which someone takes 20 minutes to perfectly place a snow globe in the exact right spot -- I WISH I had that kind. I have this weird, creepy kind. I fixate on textures and the texture of the art on that wall I'm facing is REALLY BUGGING ME OUT. I'm so sorry. Do you care? Is that weird? I know it's weird, but I swear I will stare at it the entire dinner. Ugh, it's giving me full-body CHILLS, right now."

"Oh, thank bloody goodness." I breathed a deep sigh of relief as we switched sides of the table. The wall had a weird spiky, metallic textured conceptual art installation that was making me feel like I was on acid. Now I could peacefully gaze at the other dinner patrons, which is my favorite thing to do anyway. I felt myself relax. I took another sip of wine.

You can handle this, Z.

"So what do you do?" I asked in my most civilized, normal-girl voice.

"Ohhh... you're a lawyer! That's awesome. I have a very close family member who is currently incarcerated  -- FOR A CRIME HE TOTALLY didn't commit. F*ck the system!"

Dylan looked at me, her blue eyes shining under the flickering candle. I looked back at her. And suddenly, it occurred to me that since the moment I arrived at the restaurant, all I had done was wave massive, red flags right in front of her face -- all before the appetizers had even had a chance to come out.

Now kindly allow me to disclaim: I come from thick British roots. It's not in my culture to come prancing into a posh restaurant and start listing off family secrets and tales of mental illness. I'm a nice English girl. We don't do that. I usually wait until after we've had sex around date three or four to reveal my "deal-breakers." I've always found it's much more effective to expose the skeletons in your closet after you've been intimate. No one seems that crazy or dysfunctional when you're lying in bed naked, holding one another after a night of mind-blowing sex.

And while it might have been a great "experiental journalism" idea to deliberately lay it all on the table and see what happened, this was not intentional oversharing. It had been a hell of a day, and the words were pouring out of me uncontrollably, like a broken faucet in a pre-war building.

I wasn't testing her. I wasn't trying to scare her off because I was in love with someone else or am emotionally unavailable and all that other boring bullsh*t. I just wasn't thinking at all -- none of it was calculated or premeditated. I was just being real, I guess.

Well f*ck it, I thought to myself. There was no turning back now. Once you start gabbing about your irrational phobias of textures and your nutcase brother, you can't really play the prim card anymore.

As we drank wine and nibbled on a $50 plate of oysters on the half shell, I answered every question she asked me honestly.

She asked me why I left London after living there only a year. I told her it was because I had a severe trauma that resulted in a nervous breakdown, which is when the OCD really kicked into high gear (also, of course, I mentioned I had stopped taking Xanax cold turkey, which didn't help matters either).

She asked me what the hardest part of growing up for me was; I told her it was the combo of having a gorgeous family and growing up in the entertainment industry, which gave me a warped body image and full-blast eating disorder that I've struggled with since the ripe ol' age of 14.

And, in turn, she told me a sh*t ton about her own, far-from-perfect life. She told me about her parents' divorce and how she grew up feeling displaced and homeless. She told me she was on anxiety medication because at 32, she started having severe panic attacks in the workplace.

She told me how she fell in love with a straight married woman just a few years ago and how the woman had recently gone back to her husband, and her heart was still wounded, and she wondered if she could ever let her guard down ever again.

She paid the bill.

We ended the night by salaciously making out in front of the restaurant, much to the amusement of the straight Upper East Siders passing by. I thanked her for dinner, and she took off to her downtown apartment, and I took off to my uptown apartment.

The next morning, I woke up in a cold sweat and complete panic. Guilt curled around me like a lover you don't love anymore trying to cuddle.

F*ck. I looked at myself in the mirror as I shame-spiraled, hard. Why would I tell a stranger all those things?

But you know what? By the time I got my sh*t together and got to work, she had sent me a text message: "Had a great time last night. You're super interesting and really funny, sweet and pretty. Free this Friday?"

So there it was. Evidence. I threw caution to the wind and showed Dylan my crazy on the first date and she dug me. In fact I would later come to find, she found it super attractive.

I learned a valuable adult life lesson through this experience: People are magnetically drawn to authenticity. There are a million girls running around New York City right now, playing by "the rules." Trying to emulate the kale smoothie consuming, yoga-mat-toting perfectly-filtered Insta girls.

It's f*cking boring. Being real is refreshing! It's sexy!

And people are far less scared of real sh*t than we think they are. In fact it makes them feel comfortable, like they can be their real selves around us.

Being yourself, speaking your truth and openly discussing the embarrassing/vulnerable parts of yourself shows that you are a woman who owns her sh*t.

So my new rule is this: I'm going to unabashedly be my bad self on all of my first dates moving forward. And if the girl is afraid of me because I'm loud and take antidepressants and having a bat-sh*t insane family, well then she's not worthy of my damn time.