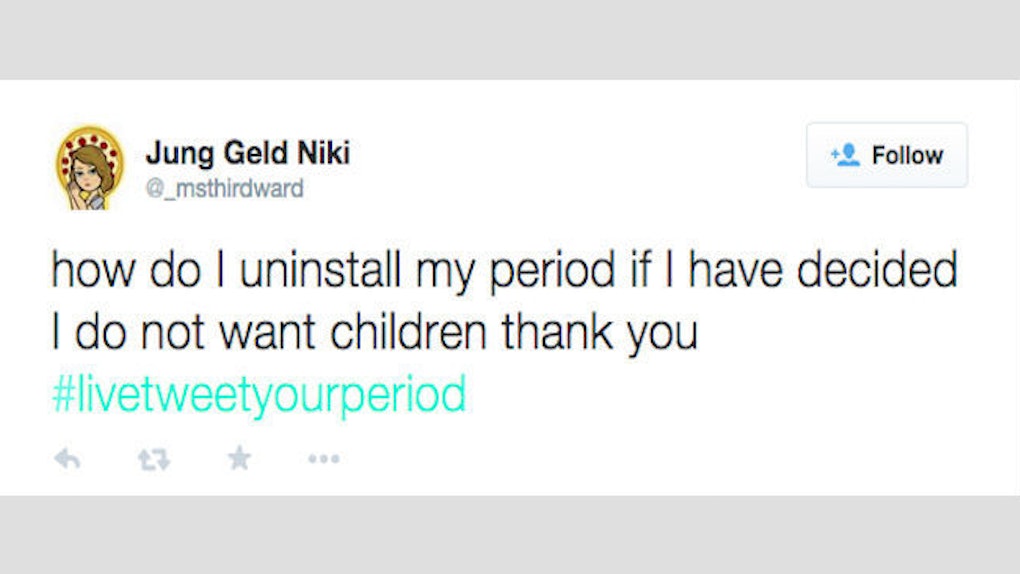 Women Are Live-Tweeting Their Periods, And It's Absolutely Amazing

The hashtag, which emerged in November, encourages women to speak openly and honestly about their menstrual cycles, often through hilarious, relatable anecdotes detailing the struggles of womanhood.

She believes the hashtag, while often humorous and lighthearted, has the potential to eliminate some of the social stigma associated with menstruation and female reproductive health.

On the surface, [the hashtag] seems like little more than communal commiseration, but to me, it felt like something bigger: a micro protest against a modern paradox. Social media is saturated with images of hypersexualized women, but these are rarely considered as scandalous as content that dares to reveal how a woman's body actually functions.

Wortham's piece sparked a resurgence in the hashtag's popularity among Twitter users.

It's not surprising: The American College of Obstetricians and Gynecologists reports two-thirds of women have some sort of pain during their periods and up to 85 percent experience uncomfortable premenstrual symptoms.

It's no wonder we need to vent.

Check out some of the best posts below.

Women from all walks of life are hopping on the #LiveTweetYourPeriod bandwagon.

The shared stories of struggle are spot-on (pun totally intended).

how do I uninstall my period if I have decided I do not want children thank you #livetweetyourperiod — Jung Geld Niki (@_msthirdward) June 18, 2015

Some ladies are offering advice for how to cope....

#livetweetyourperiod Creepy men will leave you alone if you tell them your vagina is bleeding. — Angela Marie (@_une_femme_) June 13, 2015

...while others offer confirmation you're not the only one to have that problem.

That moment when you stand up and there's a rush of blood and you hope & pray it didn't stain your pants. #livetweetyourperiod — DALAYYYY (@TheToast2015) June 12, 2015

Some have taken the 'tag a little too literally.

Day One: Anything you are thinking of doing, just don't. #LiveTweetYourPeriod pic.twitter.com/YZrp8vQVWE — E (@VexSlain) May 20, 2015

I feel like a house. I got on these too tight ripped jeans and I look like a marshmallow tied up in rubber bands. #livetweetyourperiod — Tracy LaFway Clayton (@brokeymcpoverty) May 16, 2015

Our individual struggles may vary...

I honestly feel like I'm dying.. Do chickens feel this when they lay eggs?... #livetweetyourperiod pic.twitter.com/8VLNjgUpey — Hazel Eyes (@Blondiemocha) April 28, 2015

...but we're all thinking the same thing.