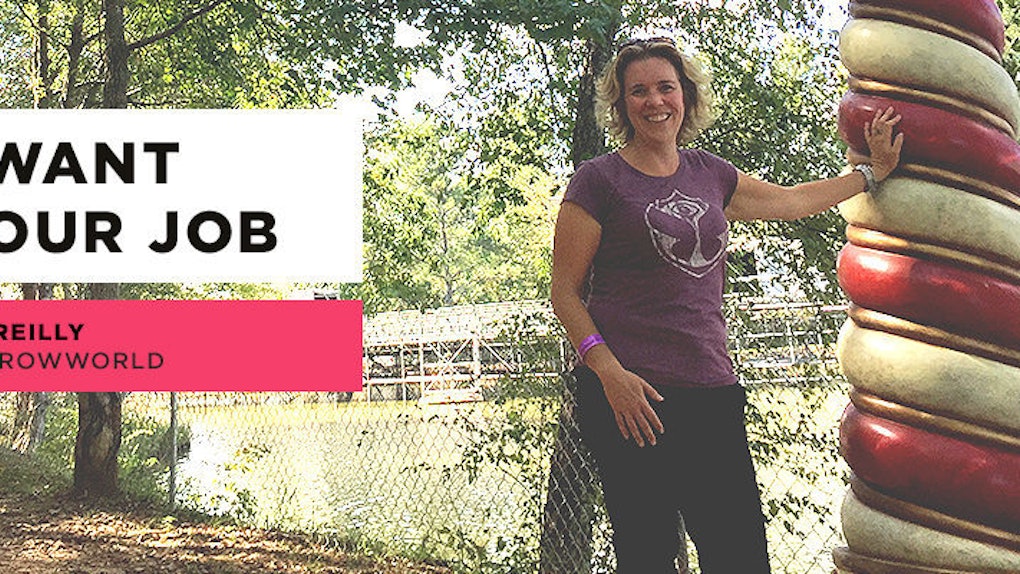 I Want Your Job: Jamie Reilly, Project Director Of TomorrowWorld

Welcome to “I Want Your Job,” Elite Daily Women's series that inspires females to go after their professional and personal dreams. We've teamed up with the most inspiring women who've made a name for themselves succeeding in everything you've envisioned doing to bring you a taste of what being a Boss Lady in every industry really looks like.

These women never gave up on their dreams, never let a man tell them “no” and aren't backing down for anybody. You want her job? Here's how to get it.

On dreary Mondays, we often joke to colleagues about wanting to “run away and join the circus.” We daydream about leaving behind bills, rent payments and responsibilities in favor of spangled unitards and sword swallowing.

Our circuses may be the stuff of dreams, but Jamie Reilly has actually lived it. Fresh out of college, while looking to find a career move beyond planning conferences, Reilly literally ran away to join the circus — Cirque du Soleil, that is.

During her early days in event planning, Reilly, 38, envisioned following in the footsteps of customers at the hotels in which she often spent time working. She speaks about her younger self like a sprinter with shoes glued in cement, itching to leap into action but not knowing how to begin.

Luckily, the answer happened to lie right under her nose. After making a few connections within Cirque du Soleil, based in her hometown of Montreal, Reilly won herself a position managing a company of performers for one of the circus' world-renowned shows.

It was the beginning of a career path that's helped Reilly fly across the globe, make hotel rooms her permanent home and commit herself to a lifestyle she labels "nomadic."

"I realized I could never work somewhere where I did exactly the same thing every single day. [I'm] very 'allergic' to a certain extent to routine work,” Reilly said. "I need to be challenged.”

Today, the bilingual Canadian has graduated from the circus to become the guiding force behind TomorrowWorld, the brilliantly constructed EDM festival that took place at the end of the summer in Georgia's Chattahoochee Hills.

For the span of three days, 35,000 rowdy campers fell entirely under Reilly's control.

From a temporary office set-up outside of Atlanta, Reilly spoke to Elite Daily in a French-tinged accent. She was eager to share the details of her career as project director of TomorrowWorld, expertly rattling off exact attendance figures without ever stopping to consult notes.

What makes Reilly so successful is immediately evident: a laser-sharp eye for detail that edges on perfectionism and a knack for creating a sense of community out of mere individuals.

By the time we hit snooze on our 7 am alarms, Reilly's been up for hours. She often beats the sun, working doggedly until long after it sets.

However, as with all success stories, Reilly's career started with a single desire to find her passion and pursue it. She spent most of her youth without a single clue as to what that could be, a frustration clearly evident in the voice of someone with so much ambition.

“I had no idea what I wanted to do,” Reilly confesses. “I would lose sleep over this because I just wanted to find this one thing where I would be so completely immersed and absorbed.”

A walking paradox, Reilly is a woman who thrives on being alone but loves to bring others together.

As company manager and, later, tour services director of Cirque du Soleil, the show's most minute details fell on Reilly. Planning for meals, packing up the famed tent and wrangling props were ultimately Reilly's responsibility. Through tour stops in Asia, Australia, Europe and Russia, Reilly wrangled her team of acrobats and managers.

Last year, while confronting her need to settle down for awhile, Reilly fortuitously heard from a former colleague working at SFX Entertainment. The company was looking for a detail-oriented miracle worker ready to take on a challenging job that practically had Reilly's name tattooed across it.

Up until TomorrowWorld, Cirque was one of the most complicated projects she'd tackled. But now, Reilly sits on a management board with just two other executives.

Like the macabre monsters of “The Nightmare Before Christmas,” who spend 364 days of the year planning for their spookiest Halloween yet, Reilly spent a year of planning time for less than a week's worth of festivities. That's a serious paradigm adjustment.

If I were to compare [Cirque to TomorrowWorld], it's really a very different level of the way you manage your momentum. At Cirque you're doing 400 shows a year, here you're working all year 'round for three days.

Unlike whirling hula-hoop specialists and dazzling acrobats, Reilly likes to stay behind the scenes. Like a clock maker brilliantly greasing gears and ensuring even the smaller cog turns efficiently, her passion lies in keeping the machine running.

That's one skill she's put into play, managing 3,000 TomorrowWorld staffers during the shows.

The magnitude of what we do here — in all kindness toward Cirque de Soleil — but it makes Cirque de Soleil look like kindergarten in terms of the set-up itself. It's completely blows my mind the things we do to create an experience that people will never forget.

In the weeks leading up to the event, Reilly was candid about the nightmares she sometimes experienced imagining possible disasters that could befall the festival. But, that's because she gives 150 percent every day and expects the same out of her employees.

In fact, this woman woke up at 6 am every day to jog around the perimeter of TomorrowWorld just get a sense of how construction was going. That's commitment.

"I like to think I get the nightmares because I care a lot," she laughed.

Caring a lot is an understatement because it's precisely Reilly's passion for perfection that's made her such an unprecedented success in her field. However, that success certainly comes with tough decisions.

Earnestly, Reilly speaks about her decision to prioritize work over meeting a partner or starting a family.

I am actually very happy with the choices that I've made. They were my choices. I don't think I've ever felt that I couldn't do things differently... Your employees and your colleagues become your family, become your friends. You have to find a way to excel in your job but also manage your personal life.

Balance, sacrifice and an eye for the extraordinary. These are the factors that make Reilly a leader and success story.